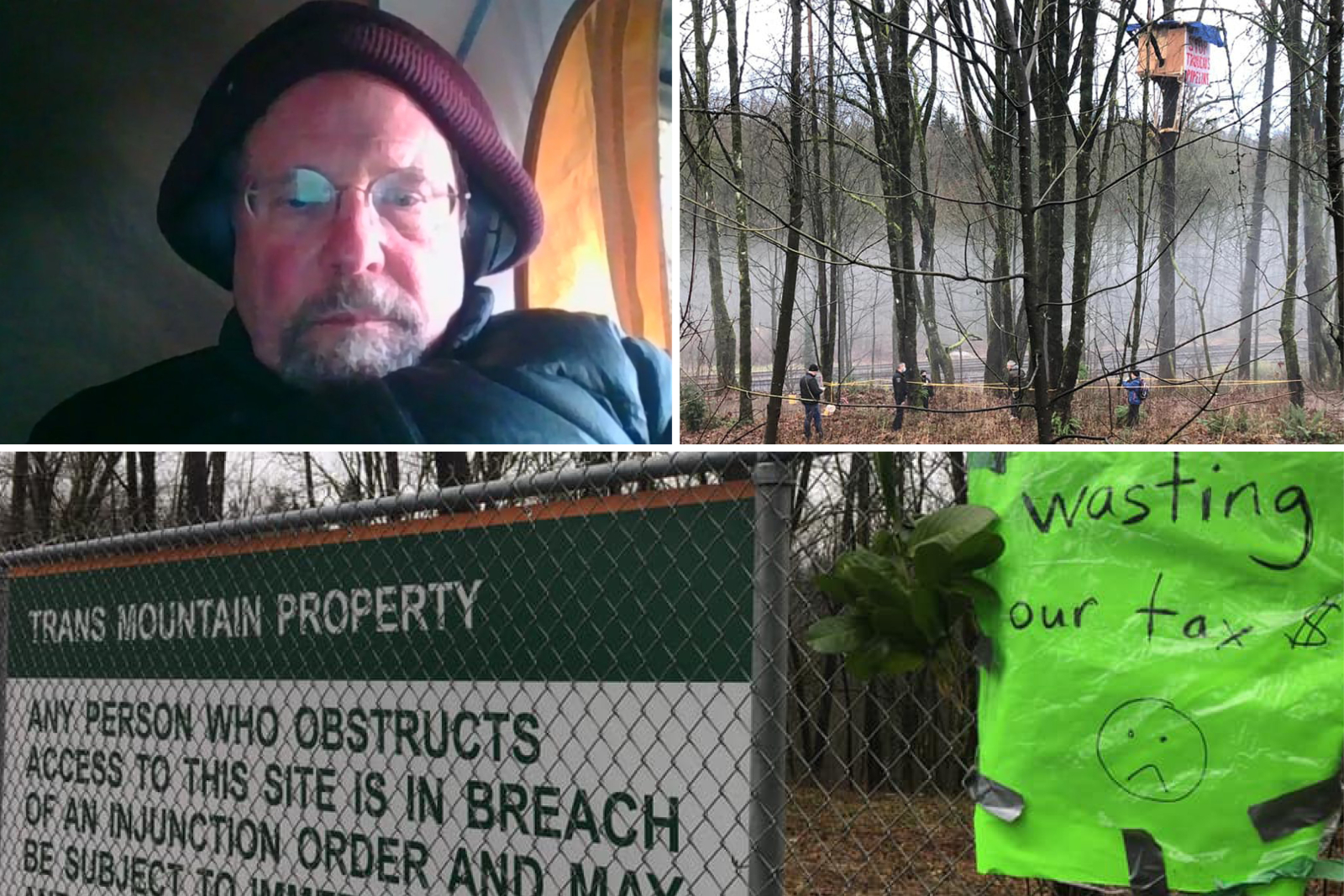 Clockwise from top left: SFU professor Tim Takaro, his treehouse protest site along the TMX route in Burnaby and a sign put up warning of an injunction order in effect. Twitter / Facebook / Protect the Planet Stop TMX
Previous story

A Vancouver-area public health physician is challenging the Trans Mountain pipeline in court after his protest site along the expansion route was demolished so trees could be cut down.

Tim Takaro, a 63-year-old health sciences professor at Simon Fraser University, is asking the B.C. Supreme Court to set aside an injunction order it handed Trans Mountain and its oil pipeline expansion project in 2018. The order has allowed police to arrest or detain anyone obstructing the project’s progress, from Edmonton to Metro Vancouver.

Takaro and a group of supporters have been camping out in forested areas along the pipeline’s route in and around Burnaby, blocking where the company will cut down trees to clear the way for construction of the pipeline, set to nearly triple Trans Mountain’s capacity up to 890,000 barrels per day of petroleum products flowing from Alberta.

He says he is choosing civil disobedience because his professional code of conduct requires that he protect the health of Canadians. Any short-term economic gains from the pipeline, he argues, will be overshadowed by the health risks caused by the climate crisis that is being propelled by pollution from the burning of fossil fuels.

In an affidavit sworn Dec. 9, 2020, Takaro said his camping and other equipment in a treehouse-style “peaceful, lawful and safe protest” site at a location on Holmes Creek in Burnaby — near a rail line and the Trans Canada highway — had been “demolished” that day before he arrived.

After he got there, Takaro stated in the affidavit, officials working for Trans Mountain, as well as Canadian National Railway and Canadian Pacific Railway, arrived. He said he was given a copy of the injunction order that would prohibit him from continuing his protest, and he complied.

“We were just about to go up into the treehouse to stay for an extended period,” Takaro said in an interview Feb. 9. Those who dismantled the site, he said, “unceremoniously dumped our stuff outside the gate.” Thousands of dollars worth of equipment, including a solar power system, batteries and climbing gear, were also taken at one point, said Takaro.

Photos posted on the Facebook page Protect The Planet Stop TMX show the treehouse surrounded with caution tape and blue scaffolding being put up. Another photo showed a sign reading “Trans Mountain property: any person who obstructs access to this site is in breach of an injunction order and may be subject to immediate arrest and prosecution.”

Public health physician @ttakaro is challenging the #TransMountain pipeline in court after his protest site along the expansion route in Burnaby was demolished so trees could be cut down.

In the days following the Dec. 9 incident, Takaro and a group of about eight supporters moved to a spot near Lost Creek, he said, the next stream along the pipeline route, and have now built another treehouse camp there.

“We’re not going to get caught with our pants down again,” said Takaro. “We’re not coming down.”

Representatives from Trans Mountain, CN Rail and CP Rail could not immediately be reached for comment.

Trans Mountain said Feb. 8 it was resuming work on the expansion project after a worker was killed at one of its construction sites near Edmonton and another seriously injured at a Burnaby site.

The “voluntary safety stand down” of its workforce of 7,000 people was ordered mid-December, and Trans Mountain said it undertook a review of all its workplace safety rules.

The ability of Trans Mountain — which is owned and operated by the Canada Development Investment Corporation, a federal Crown corporation that reports to Parliament through the finance minister — to cut down trees to clear the way for its expansion project was also made easier this month after a favourable ruling from a federal regulator.

The City of Burnaby requires a municipal permit under most circumstances before anyone is allowed to “carry out any activity that may kill or injure a tree” that is 20.3 centimetres in diameter or greater.

But the Canada Energy Regulator issued an order Feb. 3 that says Trans Mountain would not be required to obtain the permits to cut down trees. The energy company had asked the regulator’s commission if it could ignore the permits “on the basis that the bylaw is impairing and frustrating its ability to build the expansion project.”

He said he is challenging the injunction on the basis there was insufficient consideration of the pipeline’s impact on the climate and to Canada’s international obligations when it comes to the Paris Agreement.

“Anybody who really looks at this project in 2021, in the world we’re living in, and hoping for a post-COVID world, this project makes no sense whatsoever,” he said.

“Even economically, it’s no longer viable. But it’s become a political must-have for (Prime Minister Justin) Trudeau. And I think that’s a really bad miscalculation, especially for somebody who is trying to make himself into a climate leader.”

As a 2018 arrestee who self-represented a not guilty plea to breaking the 2018 TMX Injunction Order (and received the lightest sentence of ~230 convictions, hence must have made a good case for not intending to thumb my nose at the Crown), I learned about neat Catch-22 in injunction-order law.

Convictions are based on a 1992 labour-law decision by the Supreme Court of Canada, which determined that the usual two-part criminal burden of proof, having a guilty mind separate fromo guilty actions, could be conflated. The guilty actions were taken as evidence of guilty intent, or *actus reus* PROVES *mens rea*.

In 1994, the 900+ Clayoquot convictions set precedence regarding injunction orders, which are in Common Law, where judges make these laws, as well as prosecute, amend, and try their appeals.

Further, the TMX Injunction Order covers all of the roads in British Columbia leading directly and indirectly to Trans Mountain sites -- i.e. all of the roads in the province. Being seen on any of these roads with the intention of protesting-- or even just caught on video, a new precedence set this January -- sets the stage for conviction.

On spotting a protester, all Trans Mountain has to do is call the RCMP to make an arrest, and voila! Guilty actions = guilty mind and a slam-dunk criminal contempt of court conviction.

Shocking? Naw, because it's too deep into how the law works for most people to care. Even fellow protesters don't want to protest this injustice, although it's what snags those arrested.

Until we remedy this, via Parliament and our elected representatives, so Injunction-Order Law complies with the Canadian Constitution, Common Law use of Criminal-Law burden of proof, and Canadian Charter rights, those like this valiant physician are just lambs to the slaughter

Thanks for this information;

Thanks for this information; contrary to what you claim some protesters think, I agree with you. In the Fossil Fool Industries attempts to keep ripping and shipping....more and more and faster and faster, in the face of, or perhaps because of, the climate emergency.........governments are secretly changing or creating laws to aid and abet their desperate attempts to keep extraction alive.
We need to bring this to public attention. Jason Kenney recently passed a law essentially outlawing any peaceful protest near any 'essential infrastructure'...........and I've read opinions that think this could include a sidewalk.

The war on democratic rights.....citizen engagement.......and sound environmental protection for our common land and water resources is heating up. We all need to pay attention.

Fellow Canadians owe you massive debt of gratitude Dr. Takaro, for being a respectable professional, for standing up against the recklessly irresponsible Trudeau Liberal Government, which decided to back the TMX Pipeline with Canadian tax dollars. As Michael E. Mann (leading American climatologist and geophysicist, Earth System Science Center at Pennsylvania State University) stated recently, "A second Trump term is game over for the climate! We need a president who will not only meet our current obligation under the Paris accord but double down on them." Dr. M.E. Mann's statements are backed by evidence-based science. For those of you who don't appreciate the gravity of the predicament we're in, may I suggest you try stepping off a cliff if you don't believe in the equivalent science of gravity.

In a succinct Feb. 4, 2021 summary article by Barry Saxifrage (National Observer), on Canada's "performance" among G7 countries dealing with the climate crisis, it's painfully evident that Canada has proven itself the laggard. https://www.nationalobserver.com/2021/02/04/analysis/canada-pledges-stre... “Despite promising since 1988 to reduce our oversized climate pollution, we've instead cranked it up. We now find ourselves the ONLY G7 MEMBER still polluting well above the 1990 starting line." Canadian climate pollution levels have risen to about 21% above our 1990 level. Even the USA has managed to bring its climate pollution down to its 1990 level!

On a per person basis in the G7 (U.K., France, Italy, E.U., Germany, Japan, USA and Canada), "Americans and Canadians are the super-polluters in the group. Both emit 20 tons of climate pollution per person (tCO2) each year. That's twice as much as any other G7 country." Although the Americans used to be significantly worse polluters than Canadians, they have done a better job of cleaning up and they're on track to soon leave Canadians in the position of greatest G7 super-polluter.

There's no way greenhouse gas emissions can be reduced by continuing to pour tax dollars into the fastest-growing source of emissions in Canada.

All true enough.....but the Federal Liberals are betting most of us don't connect these dots........and they can continue taking funding from the likes of CAPP a while longer. Perhaps what's needed is exposure of who politicians are beholden to, and what they get for the support. Justin sure hasn't received any thank you notes from the 'I heart oil and gas" crowd in Alberta. You'd think they'd learn fossil fuels are no longer profitable; the earth can't afford them.