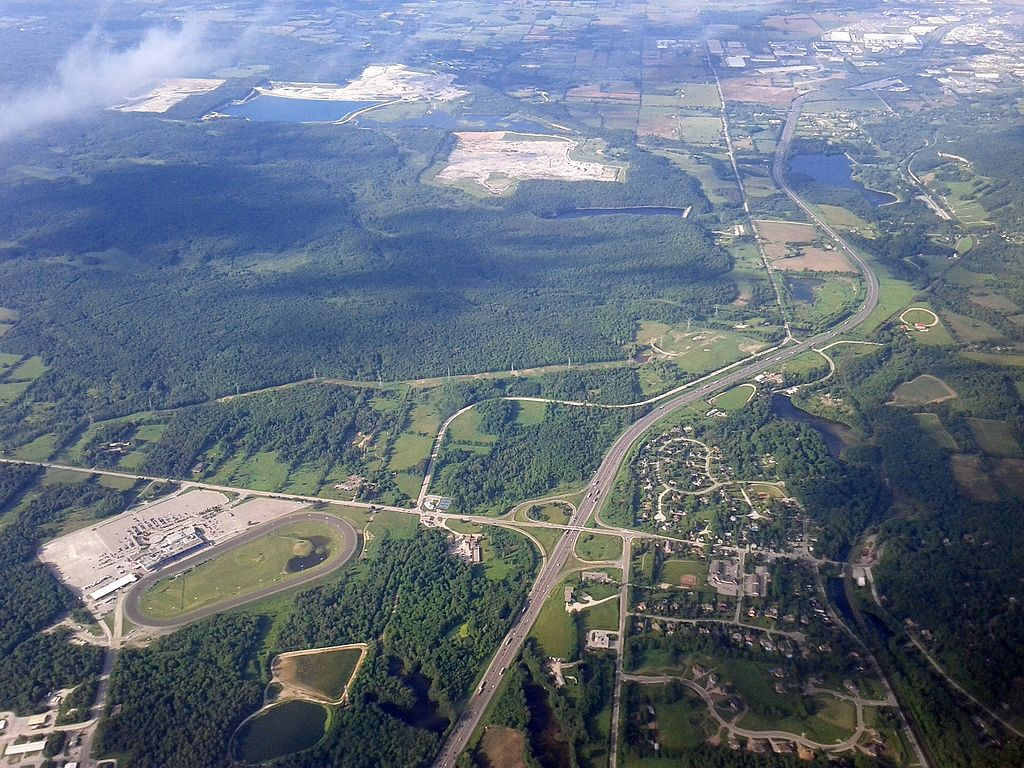 Highway 401, seen from above, winds through Ontario's Greenbelt. If built, the Bradford Bypass would also cut through part of the protected area. Photo by Haljackey / Wikimedia Commons
Previous story
Next story

The association representing engineers in Ontario is calling on the province not to start building the Bradford Bypass until it has done a full review of the proposal’s environmental impact.

The Ontario Society of Professional Engineers (OSPE) said Sunday that it isn’t asking for the contentious Toronto-area highway to be cancelled, but wants the Ford government to examine alternatives, like public transit. The Progressive Conservatives are seeking to start work on the highway before finishing a set of studies meant to update its last environmental assessment, done in 1997.

The association’s CEO, Sandro Perruzza, acknowledged the project could create jobs for engineers, but said the profession also has a duty to protect the public and the environment.

“Before the project should proceed, an updated environment assessment (should) be done by qualified professional engineers,” he said in an interview Wednesday.

“We don't have enough evidence one way or the other to make a comment on whether the project should proceed or not.”

“These task forces are made up of professional engineers who are experts in their field,” he said. “Some of them work for engineering companies, some of them actually work for government as well. So they have a lot of insight into these projects.”

The Bradford Bypass is a planned four-lane highway that would run 16 kilometres across York Region and Simcoe County, in the outer suburbs north of Toronto. Its route would also cut through the Holland Marsh, an area of wetlands and fertile soil that’s part of the protected Greenbelt and drains into Lake Simcoe.

Natasha Tremblay, a spokesperson for Ontario Transportation Minister Caroline Mulroney ⁠— who is spearheading the proposal ⁠— didn’t directly respond to OSPE’s concerns. But in a statement, she said transit alone wouldn’t be enough to keep pace with forecasted population growth.

“We are a pro-transit government, but transit alone is not the solution,” she said.

"When there isn't evidence there, or the evidence isn't being provided, then people should be concerned,” said @O_S_P_E CEO Sandro Perruzza. #BradfordBypass #onpoli

“Congestion is not just going to disappear, and neither is commercial traffic. Congestion is a major contributor to greenhouse gas emissions, and as the population grows, we cannot afford to delay planning for this project.”

Mulroney has said the project would likely cost about $800 million, a far lower estimate than the one from the Toronto Region Board of Trade, which forecast a price tag of $1.5 billion.

Perruzza said in the case of the bypass, nearly 25 years have passed since the project last had an environmental assessment.

“And certainly, you know, we have a better understanding of the effects of climate change and biodiversity and the importance of that. So we thought that before the project should proceed, an updated environmental assessment (should) be done by qualified professional engineers.”

OSPE has also raised concerns about the 413, another contentious Ford government highway project. In that case, the group called for it to be cancelled.

‘People should be concerned’

The bypass, which would run east-west to connect highways 400 and 404, was first conceived decades ago, but shelved by the McGuinty government in the mid-2000s. Kathleen Wynne’s Liberals put it back on the table in 2017, but it didn’t move forward until Doug Ford’s Progressive Conservatives started pursuing plans in 2020 to forgo a new environmental assessment and expedite the project.

In its statement about the project, OSPE said key information about the bypass remains missing.

The 1997 environmental assessment didn’t account for emissions that contribute to climate change or research showing that building new roads doesn’t fix traffic congestion. It also predicted severe water pollution issues that could harm fish habitat and Lake Simcoe, and suggested the highway could raise levels of the carcinogen benzene beyond what’s now allowed.

“These studies are out of date,” the OSPE statement said. “The EA process and requirements have changed drastically throughout this time frame, and so has the environment. The province should ensure a new robust (environmental assessment) is conducted.”

The group also said the 1997 assessment didn’t examine whether public transit or the expansion of existing roads could work better than a new highway. The Ontario government contends the bypass would save drivers 35 minutes, but has declined to publish the studies that data is based on, saying they’re still in progress.

“When there isn't evidence there, or the evidence isn't being provided, then people should be concerned,” Perruzza said.

Mulroney also hasn’t given a clear answer when asked whether the bypass could be a toll road.

In the wake of OSPE’s statement, opposition critics at Queen’s Park renewed calls for the Ford government to rethink its plans.

“The best-before date on the environmental assessment that they're using has expired quite a long time ago,” she said. “It’s irresponsible to try to use old data for a new project that puts so much at risk.”

“We need to urgently reduce our emissions, and that starts with rethinking transportation,” he said in a statement.

“We don’t need more four-lane highways and cars on the road. And we definitely don’t need more highways that run directly through the Greenbelt, pave over the Holland Marsh and threaten the already at-risk Lake Simcoe.”

Ontario Liberal environment critic Lucille Collard said the environmental assessment for the project is “outdated,” and that her party would ensure “all environmental considerations are factored into infrastructure projects.”

“Expanding highways is important, but only where and when they make sense,” she said in a statement.”

Though the highway still has strong support in the municipalities along its route, local councils in two nearby communities have declined in recent weeks to pass motions speaking in favour.

The province has already begun acquiring land for the highway, with early construction to begin as soon as early 2022. That work could include overpass construction, fencing and grading, Tremblay said.

“Prior to the commencement of any early works, (the Ministry of Transportation) is required to gather information about environmental conditions, predict and mitigate impacts to the extent practicable, consult with the public and stakeholders, consult with Indigenous peoples, and document decision-making,” Tremblay said.

“Other provincial and federal legislative and permitting processes would still apply. That said, (environmental assessment) clearance is not required to conduct early works.”

and dont trust the rest to do what is right unless citizens are very vocal, vigilant and very actively working to hold mpps to account