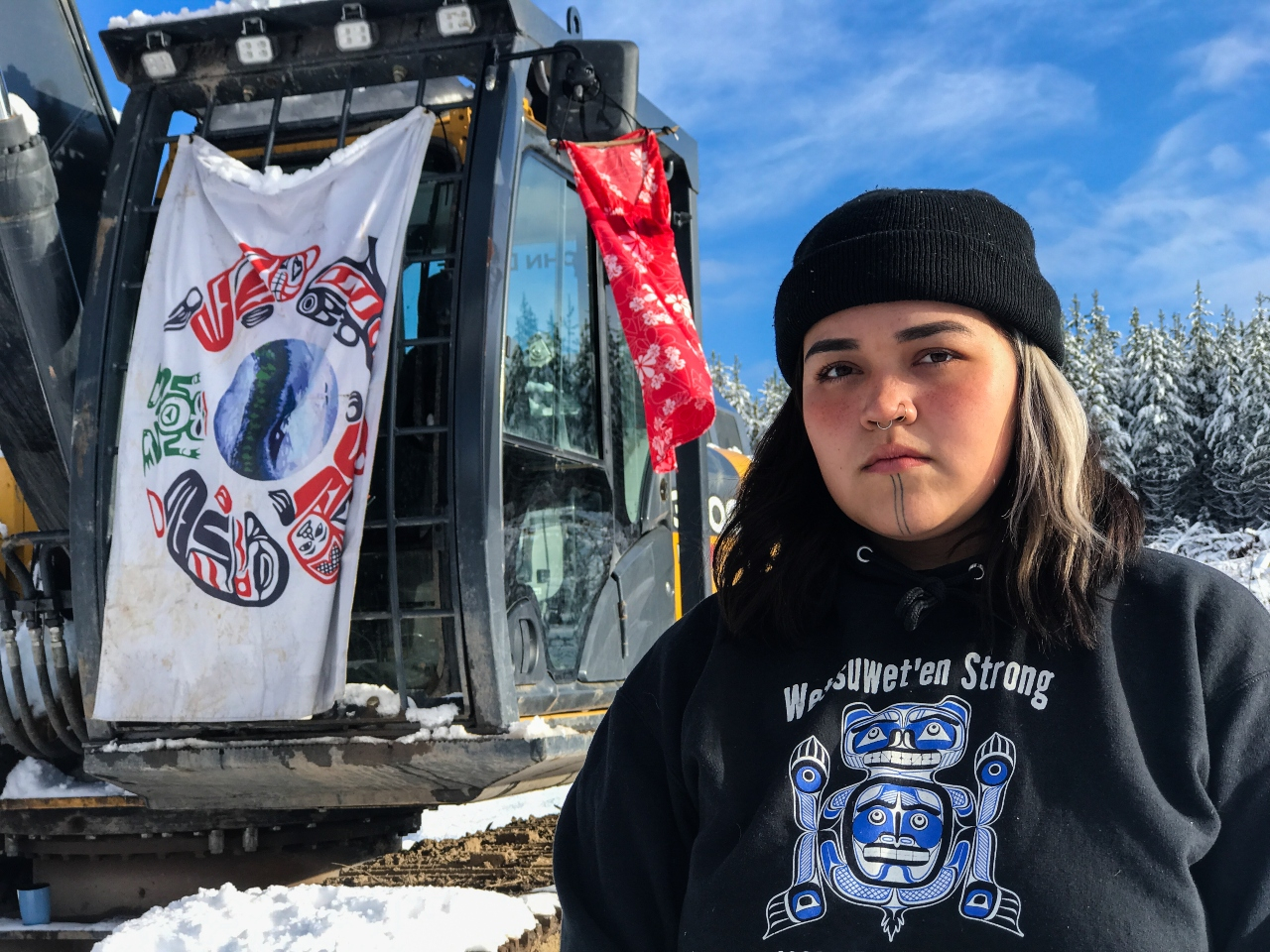 Shay Lynn Sampson is determined she won’t be telling her children what salmon used to taste like or what it was like to live close to their land. She is one of the Indigenous people preventing Coastal GasLink (CGL) from running a pipeline under Wedzin Kwa (Morice River), the pristine water source for the Wet’suwet’en and their close downstream allies, the Gitxsan.

Twenty-two-year-old Sampson spoke to me on November 8 from behind a blockade inside a “Tiny House,'' purposely built with many other structures to shelter the people putting their bodies on the line to stop the project. Sampson is also the youth engagement coordinator for Indigenous Climate Action. This young Gitxsan woman is helping to ensure the Coastal GasLink pipeline never gets built.

This piece is part of a series of 54 profiles to date that highlight the work of young people across the country in addressing the climate crisis that I have been doing over the past two years. These extraordinary humans give me a lot of hope. I write these stories to pay it forward.

Where are you and why?

I am near Houston in northern British Columbia on a small side road off a forest access road. I am here at the invitation of the only authority I recognize on this land, Dinï ze’ Woos, the hereditary chief of Cas Yikh, the Grizzly bear house of the Gidimt’en clan. He and his people have occupied this yintah for thousands of years and remain sovereign and undefeated. Even the Canadian courts have recognized the role of hereditary chiefs in protecting this unceded land.

Not only have the people here never ceded their title, they have actively and victoriously protected it. In 2010, 13 pipeline projects — including Enbridge, Pacific Trails Pipeline, Spectra, and Pembina — proposed going through Wet’suwet’en territory. The hereditary house chiefs of all five clans declared that no pipeline will ever go through. All have pulled out except CGL.

In 2019, a wave of protests swept across the country in solidarity with the Wet'suwet'en lack of consent for this pipeline. In September, when it became clear CGL was advancing into his territory, Dinï ze’ Woos called for protection and defence. Indigenous and settler guests responded to the invitation. But within days of the reoccupation, the RCMP made violent arrests and subjected unarmed guests to police brutality. In response, a delegation of Haudenosaunee showed up and walked the RCMP out of the territory. The police have not returned.

In late October, Chief Dtsa’hyl (Adam Gagnon) seized heavy equipment at a series of worksites along the historic Kweese War Trail in northern British Columbia, enforcing ancient trespass laws against pipeline contractors who ignored his warnings for a year. He was arrested. On Nov. 14, the Wet’suwet’en hereditary chiefs’ eviction was again enforced and CGL employees were given eight hours to leave. As a Gitxsan, I come from a long line of allies to the Wet'suwet'en. We are downstream from this project. I am doing my part to make sure this pipeline is never built.

Tell us about a day in your life behind the blockades.

"I am so proud of who I am and where I come from and what I stand for," says 22-year-old Shay Lynn Sampson. #CoastalGasLink #Wet’suwet’en #Blockades

It is snowing and getting very cold. Much of our time is spent preparing for winter and keeping our bodies warm. Our living and working areas are heated with firewood. We have strong community support to make sure we have water and food. We live every day as it comes, knowing the RCMP may return. The love we have for each other, the joy we feel about being out on and protecting the land, and the huge amount of support we are getting from across Turtle Island and the world keeps us strong and warm.

What have you experienced from the RCMP?

Sometimes they taunt and ridicule us or try to manipulate us into giving them information or giving in. Sometimes they come to destroy our freshwater containers. They arrested two hereditary chiefs and prevented them from accessing their land, which is a breach of our universal right as Indigenous people. Most recently, they have used what they call “pain compliance” — which we call torture — on a fellow defender. He locked himself into a hard block to stop construction advancing. They lifted his legs and twisted his hands causing excruciating pain while telling him if he unlocked, the pain would stop. He screamed for over an hour. When he still did not break, a female officer tried to demoralize him, telling him he was alone. I was locked into a hard block and hearing all of it for the entirety of the time. I will never forget.

The RCMP was formed to clear us off the land to make way for extractive industry. It supported the government to steal our children. Many of the same officers in this platoon were authorized to shoot Wet'suwet'en in 2019. They have always done this. We are just the latest. Maybe they will be back or maybe they won’t. We are not going anywhere.

Why is running a pipeline under a headwater so problematic?

It is not just a pipe — it is a pipe filled with poison that is likely to break. “Liquefied natural gas” or “LNG” is an industry term concealing the dirty truth of fracking. Toxic carcinogenic substances are used in hydraulic fracturing, and there have been thousands of gas transmission line accidents, injuries, and deaths. The damage caused by pipeline spills causes irreparable harm to the Earth and our people. Many kinds of salmon spawn in these headwaters. This is the life force for so many other creatures and beings and our people.

Laying the pipe is the last part of a destructive process of road-clearing and building and other forms of preparation. Coastal GasLink has broken or ignored hundreds of environmental assessment orders on this project. They have a terrible track record and they do not feel accountable.

Even more important, and even if it was not so dangerous, the law of Canada requires free, prior, and informed consent from the titleholders. There has been no consent. It is not lawful for them to be here. They have been asked to leave. They are trespassing.

Tell us what brought you here.

I was raised in nearby Hazelton, but I grew up distant from the land. There was little to do and I was glad to go to Victoria for my university education. While I was there, I participated in the 2019 Wet'suwet'en occupation of the British Columbia legislature protesting this pipeline. My Gitxsan hereditary chief asked me to come home and talk to my people about the event. I was honoured to be seated with chiefs who hold rights and titles that are thousands of years old. When I saw how much support there was for the occupation and how important it was to my elders, I looked at my land in an entirely new way and was transformed. Now I cannot imagine wanting to be anywhere else. I have learned that when I am connected to the land, I am strong.

At Indigenous Climate Action, I remind youth that Indigenous people all over the world continue to be leaders in the fight for a just transition to a low-carbon world. If you are Indigenous, know you carry this legacy. For all youth, maybe it would help to know that I wasn’t at all sure how to make sense of my place in the world. But I got involved and found my people and now it is so clear. I am so proud of who I am and where I come from and what I stand for. That is what waits for you when you get involved.

Let your MP and MLA know you don’t support them empowering this destructive project and you don't agree with your tax dollars subsidizing projects like this one. Tell your bank you want them to stop digging our collective graves by lending to fossil fuel companies. Let decision-makers know you do not consent to RCMP brutality. Remind them that our hereditary chiefs have jurisdiction over this land.

brava to you. know that there

brava to you. know that there are many of us out here in canada who are watching closely, don’t buy the corporate media propaganda story of you as ´protester’ not land defenders.
your clarity of purpose is admirable and correct
courage
we are with you in spirit, and action:

we will take our money out of fossil banks, pensions, industries.
we will stand at city halls, mps offices, write letters, ( for what they are worth?)
we will block roads and rail lines if needed

Maybe what we need to do is

Maybe what we need to do is everyone buy one share in fossil banks, and provide a proxy to the people who advance divestment motions regarding fossil fuel extraction.
I wonder if we have any actual power, as citizen contributors to the Canada Pension Plan, to demand its directors divest.

I admit to being shocked and

I admit to being shocked and disgusted when I saw the photo of the armed (automatic weapons) RCMP arresting people at the most recent protest. It seemed far too similar to the recent photo of Kyle walking the streets of Wisconsin with his murderous automatic weapon. Why does the RCMP need such force of arms? It is a disgrace that we allow this to happen.

What a great communicator you

What a great communicator you are, Shay Lynn.
Doubtless from the profile, you have other big strengths as well. But please take every opportunity you can get to further exactly the message your profile gives.
Specifically, it ties the interests of the Wet'suwet'en with the interests of the rest of the province ... in a way that makes it very, very clear it's about climate change, in addition to being about Wet'suwet'en rights.
It very neatly sidesteps the laissez-fair posturing of governments and racists, who've appeared far too ready to lay everything at the feet of, "Well, the Wet'suwet'en need to come together among themselves," dismissing the findings of the Supreme Court of Canada, and helping pipeline supporters to rely on a false implied narrative, and thus common perception, perception that the "elected chiefs" are elected by a majority of the Wet'suwet'en people, and not as part of the governance of the reservations onto which many of the people were forced, under The Indian Act.
That counter-factual spin feeds the myth of division amongst the leaders of two factions of the same governance system.

It would be great to see more

It would be great to see more coverage of all the Wet'suwet'en. I don't understand how the internal politics of clans, houses, and hereditary chiefs, work. I have been given to understand that they are not (or not strictly) hereditary, but I'm not clear how they are chosen and supported...or if that process differs from clan to clan.