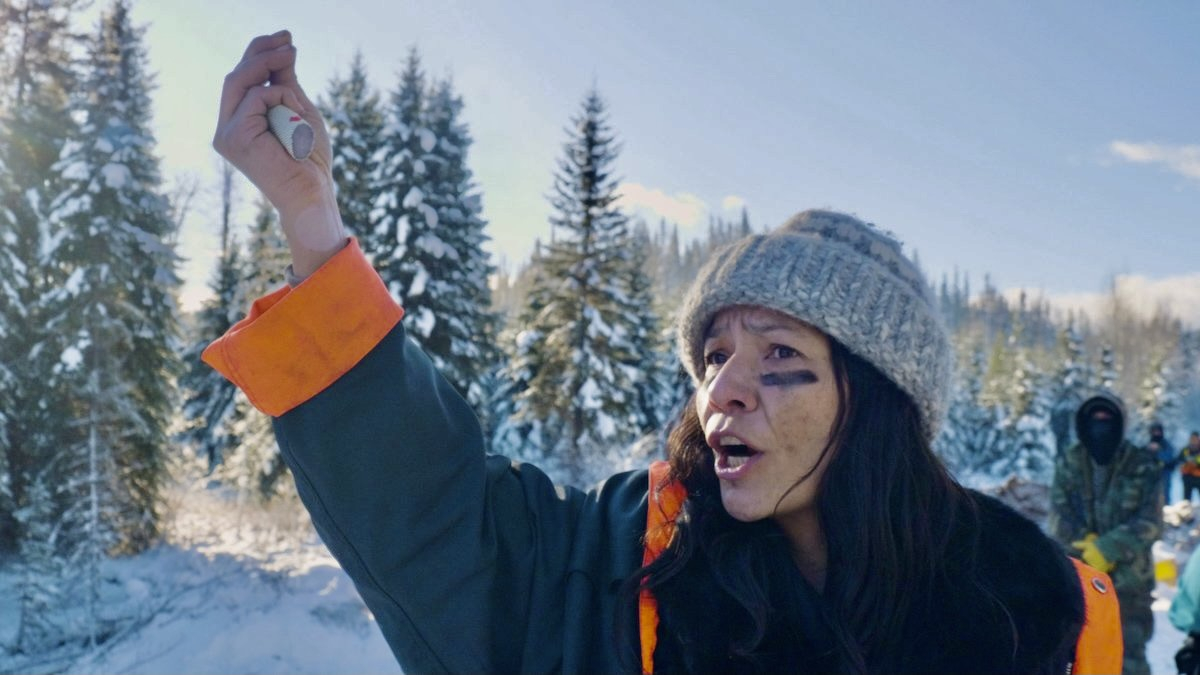 Land defender Sabina Dennis was among those arrested by RCMP on Wet'suwet'en territory on Nov. 18. Photo by Dan Loan
Previous story
Next story

Three land defenders claim they were subjected to dehumanizing treatment at the hands of RCMP following their arrests on unceded Wet’suwet’en land on Nov. 18.

The trio say they were transported from an RCMP detachment in Houston, B.C., to Smithers in enclosures about the size of a “dog kennel” in the back of police SUVs. They also say they were forced to appear before the judge in their long underwear and put in hand and ankle cuffs, even though none of them were armed at the time of their arrest.

“The police officer motioned for me to go around to the back of the SUV where you open the hatch. Inside the hatch were these two cages that were bolted to the floor,” said Skyler Williams, a Haudenosaunee land defender from Six Nations and spokesperson for 1492 Land Back Lane, who travelled with siblings Layla and Logan Staats to Wet’suwet’en territory last month.

“Anyone with a big dog would recognize these as a large dog crate.

“You're basically sitting on the floor with your knees tucked up to your chest as they close the door behind you,” he said.

The RCMP did not provide a response to Canada's National Observer by deadline. But in answer to an earlier inquiry by CBC, police denied any mistreatment and said the “allegations of how individuals were treated in a fashion similar to canines is ludicrous.”

The claims were first made last month and come as the RCMP faces increased criticism for how it is choosing to enforce a court injunction that allows Coastal GasLink to build a multibillion-dollar pipeline through Wet’suwet’en unceded land despite opposition from the nation’s hereditary chiefs, who have authority over traditional territories. The day after these arrests, RCMP raided Coyote Camp, where ​​Gidimt’en Checkpoint spokesperson Sleydo’, two journalists and others were arrested.

A few days later, RCMP arrested Gitxsan land defender Denzel Sutherland-Wilson, who can be heard screaming “I can’t breathe” in video footage of the arrest as officers pile on top of him. Gitxsan leaders later told provincial MLA Nathan Cullen he was being evicted for failing to protect Gitxsan and Wet’suwet’en constituents from police violence. Soon after, Cullen wrote a letter to RCMP Commissioner Brenda Lucki requesting the “undue force” shown in the video be reviewed. Cullen declined to comment.

Hundreds of academics have signed an open letter condemning the RCMP’s use of force during this crisis, demanding an “immediate retreat” and calling the injunction being used to clear land defenders part of a “legal house of cards” arising from “a racist anthropology of discovery and claims to underlying title to lands that have never been the province’s to grant.”

In interviews with Canada’s National Observer, Williams, Layla Staats and another land defender who was arrested the same day, Sabina Dennis, gave similar accounts of violence by RCMP during the arrest and alleged demeaning treatment during a court appearance that followed.

“We were put into shackles and led to a vehicle, where we were transported in these small boxes that were similar to dog kennels in size," says a land defender who was arrested last month as police enforce Coastal GasLink's injunction. #cdnpoli

“We were put into shackles and led to a vehicle, where we were transported in these small boxes that were similar to dog kennels in size,” said Dennis.

Staats said she was transported the way Williams and Dennis described, too, and was surprised to see the RCMP deny the allegation to CBC.

“I was like, how could they deny that? You know that's the kind of transportation you use,” she said.

After being arrested and before being transported to court, the land defenders say they were also forced to strip to one layer of clothing. The RCMP reportedly told CBC those arrested “were given the option what single layer they wished to wear” and the individuals chose long underwear.

The defenders say it wasn’t presented as a choice of which clothes to wear; rather, they were just told to strip down to one layer for security reasons.

Wearing only one layer, the arrested land defenders were transported from Houston to Smithers for court, they say.

“After we got taken to court, I was expecting at some point along this walk to the courtroom that we were going to be given our clothes,” said Williams.

“You've got shackles on and you're just kind of shuffling from one nondescript door to the next… and as you're walking with these shackles on, trying not to trip over the chain that's between your legs, the floor went from a concrete … to this red carpet,” Williams said, referring to entering the courtroom.

The RCMP told CBC “no one was placed in leg shackles during this operation.”

However, Staats also said she was cuffed like Williams.

“They brought me into the court, I hadn't showered, I looked like a crazy person in my Spandex long johns, my ankles chained and my wrists cuffed,” said Staats.

“I didn't deserve to be paraded in that way, and when I got back to my cell, I spoke to two other girls … in my cell with me, and they were like, 'We didn't get ankle cuffs’ ... some of them didn't have handcuffs. So I'm thinking, why are the Mohawks or whatever being singled out in this way that we would be shackled?” she said.

Separately, Dennis also described being made to go before the judge with ankles and wrists cuffed and without proper clothes.

“They brought us before the judge in our undergarments, with lawyers and all these different officers of the court present to witness us women looking that way, dishevelled and brutalized … to an outsider, we would look like criminals,” she said.

“We should have the right to clothing and to fix our hair and to look presentable in court so that we don't get further criminalized,” she added.

Altogether, 14 people were arrested that day while on the front lines of the Coastal GasLink crisis. An RCMP press release acknowledges claims are being made that officers used excessive force, but says those are false.

— With files from Patricia Lane

This is supposed to be Canada

This is supposed to be Canada a civilized ???? Country where we should be recognizing and respecting all people. This includes Indigenous people. This is disgusting what the RCMP and the Prime Minister and Premier Horgan are responsible for allowing this to happen. I am ashamed to be a Canadian.

What is happening to our

What is happening to our country and it's elected leadership if the "Police" are allowed to act as they do these days? This should be an election issue in the future. I see the NDP in a whole new light in that they have allowed the police to conduct themselves this way without even responding to citizen(s) inquiries or take action to ensure that this overuse of force and weaponry is discontinued. If we allow this to continue we will be next. History teaches us this simple truth.

And of course as usual, the

And of course as usual, the RCMP are lying about it. Frankly, given the history of police testimony flat out contradicting video evidence, it's getting to the point where I think it would be worth just categorically excluding police testimony. Because it doesn't matter what you did or didn't do, or what they did or didn't do, they will consistently lie to claim you did do whatever they feel like pinning on you and that they didn't do whatever brutality or humiliation they actually did.

Folks might remember some several years back when a kid picked up for having an open can of beer in a paper bag, outside the local arena.
Next morning, he was dead: shot in the back of the head -- in self-defence, the policeman claimed; the video required to be turned on and left on? Somehow not even there.
The young fellow was in a locked cell; there was no reason for the officer to be anywhere the prisoner might have been able to pose any threat at all.

The RCMP, or at least factions within it, have been out of control for many decades.

The arrest story is well-told

The arrest story is well-told by the two journalists in the little hut, on a CanadaLand podcast. It's good nobody was injured. The video documentarian expressed his relief to find all his footage was intact after he got out of 3 nights in jail, and I hope that the dog-cage thing was caught on film. It's not necessary, as the testimony is enough. But video is hugely helpful, as with the Ft. Mac chief and the flying tackle.

That said, the National Observer absolutely has to broaden its coverage to maintain journalistic credibility. At this point, you've been scooped by Global, the Vancouver Sun, and worst, the National Post with eye-opening takes from other members of the local community.

Linda Solomon Wood | Wed, 12/08/2021 - 13:08
Thanks for your comment, Roy. We may have been scooped on this story but it is such an important story, we believe it is important to cover it on our pages, too. Even if we're not first out of the gate. Here's something new for you: a fresh episode of Race Against Climate Change: Getting of oil and gas. https://www.nationalobserver.com/podcast/race-against-climate-change/getting-oil-and-gas

Police are perfectly aware of

Police are perfectly aware of how far they can go and get away with it. Especially if there is no visual evidence to support claims of abuse. I am enraged that no members of the bar protested the obviously abusive treatment of the protesters when they arrived in court.
I am also quite sure that the "cages" will have been speedily removed and hidden to prevent verification.
Yes - there are elements of the RCMP who have fallen into the black hole of racism and entitled brutality - and so far, no other officers have had the courage to stand up and denounce them.