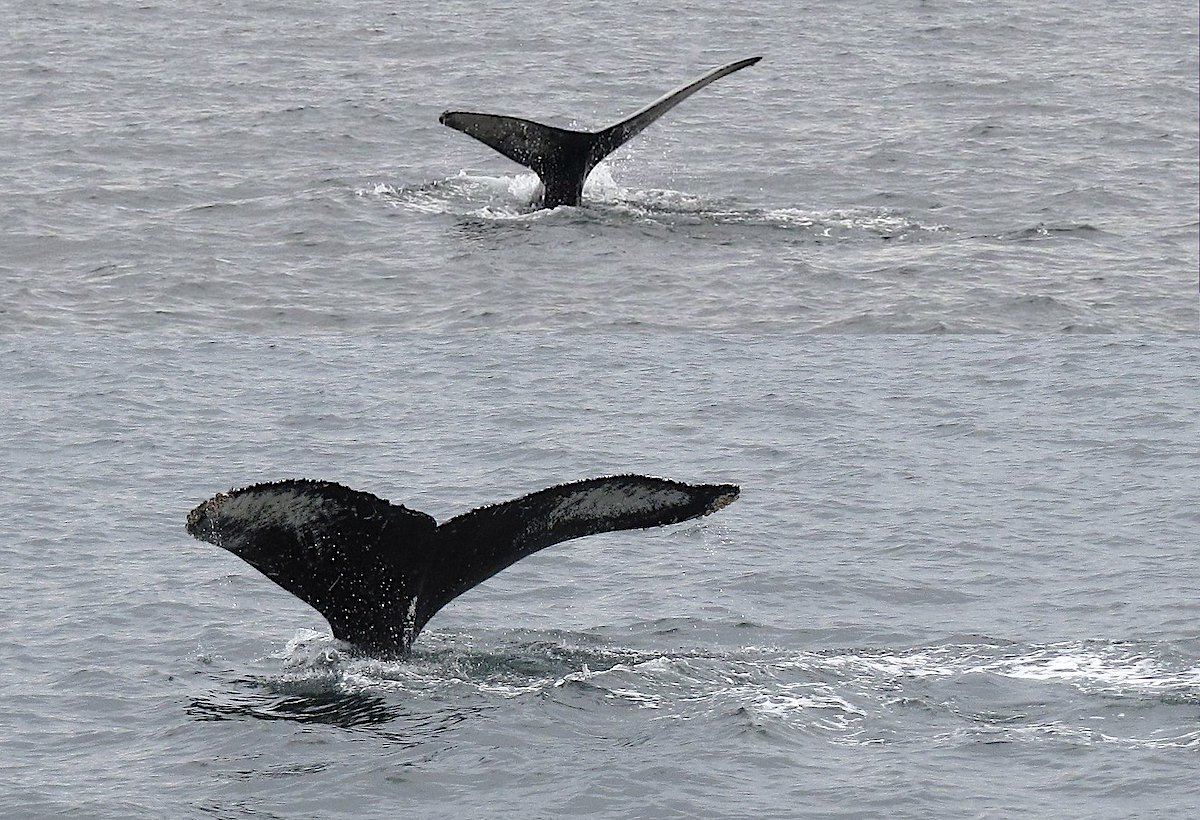 Citizen scientists in the Gulf Islands are worried humpback whales are being stressed by too much time with whale watching vessels. Photo by Steve Knight/ Flickr (CC by 2.0)
Previous story

The return of a mother humpback whale and calf to B.C. waters should be cause for celebration, says Saturna Island resident Susie Washington-Smyth, but instead it’s causing dismay and concern for a coastal citizen science group.

A humpback known as Big Mama and her new calf were followed by an entourage of whale watching boats upwards of five hours a day while in Boundary Pass earlier this week, said Washington-Smyth, co-ordinator for the Southern Gulf Island Whale Sighting Network.

The network — which has more than 50 volunteer observers on three different islands to track whales — noted as many as eight vessels at a time in the vicinity of the humpbacks, Washington-Smyth said

Boats arrive from both sides of the border in the waterway dividing the Canadian and U.S. Gulf Islands, she said.

“I don’t want to anthropomorphize,” Washington-Smyth said. “But how would you like it if you had a baby and you were swarmed by paparazzi for eight hours a day?”

There’s no Canadian regulation against boats tailing whales all day, but there should be, said Washington-Smyth, worried about the stress the constant presence of boats might have on the whales and their ability to communicate, feed or relax.

Voluntary guidelines suggest whale watching boats only remain 30 minutes with whales, she said. Most depart within the recommended time, but they are simply replaced by other boats.

The network’s sighters — trained to track the distribution, frequency and types of whales frequenting the waters around Saturna, Pender and Mayne islands — also record vessel infractions that fall under the federal marine mammal regulations, she added.

Sunday through Tuesday, sighters observed violations such as boats getting between the mother and calf and breaches of minimum distance rules — staying at least 200 metres away from a humpback with a calf.

For the most part, whale watching operations obey rules and guidelines, but the pressure on Big Mama and her calf in the early part of the week was “egregious,” Washington-Smyth said.

"Would you like it if you had a baby and you were swarmed by paparazzi for eight hours a day?” says Susie Washington-Smyth, co-ordinator of a whale observer network in B.C.'s Gulf Islands, worried a humpback and calf are stressed by whale watching.

“We had three days of really significant whale harassment.”

Erin Gless, executive director of the Pacific Whale Watch Association, said she hadn’t seen reports or video from the network involving infractions of the regulations, adding the ecotourism group’s members are committed to responsible wildlife viewing.

Whale watching vessels would take care to not separate whales from their offspring, she said.

“But, of course, whales are wild animals, and sometimes they make movements contrary to what we’re expecting,” Gless said, adding operators can’t always predict where they will surface after a dive.

Whale watching vessels are equipped with radar or range finders that let operators know the exact distance they are from whales. But gauging minimum distances is often difficult for viewers from far away, and a long camera lens visually compresses distance the farther a photographer is from a subject, she said.

And the distance regulation for whale watching boats in U.S. waters in the passage is only 100 metres from a humpback and calf, which might appear to be a violation to a Canadian observer, she said.

There are no regulations capping the length of time whales can be followed, Gless confirmed, but she disputed the continuous presence of the vessels constituted harassment.

On the contrary, whale watching operators play a sentinel role in alerting other ships in congested waterways to the whereabouts of the animals so they can slow down and avoid fatal whale strikes, she said.

“I look at it the opposite way,” Gless said, adding having whale watching vessels around is like having a lifeguard on duty.

“They worry we’re there five hours a day, and I’m worried that we’re not there for the other 19 hours.”

Reports are needed for investigations

Should anyone believe they’ve witnessed an infraction, it’s best to provide a detailed report to the DFO Marine Mammal incident hotline so it can be followed up, said Morgan Van Kirk, an officer with Fisheries and Oceans Canada (DFO) whale protection team.

DFO officers were made aware of the network’s recent concerns for the humpbacks, but it’s still necessary for detailed reports, ideally with video, to be made to the hotline for investigations to take place, Van Kirk said.

A DFO boat was dispatched to monitor the situation earlier this week but engine trouble forced it back to shore, he said.

Given the vast amount of territory fisheries officers must cover, it’s not always possible to provide an immediate response on the water, Van Kirk said, noting the seasonal marine management areas for endangered southern resident killer whales (SRKW) alone include waters on both sides of southern Vancouver Island.

Washington-Smyth says she doesn’t doubt the commitment of DFO officers working on the ground to protect whales but says federal regulations are insufficient to fully protect them, and not enough money or resources are allocated to allow the immediate enforcement of regulations or relief to stressed-out whales.

Washington state has limits on the number of hours an endangered southern resident killer whale can be trailed by vessels, and only allows a maximum of three boats at any given time, she noted.

Canada should do the same, and apply these limits for all whales, not just for southern residents, she said, noting humpbacks and Biggs (transient) killer whales aren’t endangered like the SRKWs, but they’re still listed as threatened.

And followup investigations, while necessary, don’t replace monitoring and enforcement on the water, she added.

“The whale watching industry can’t be allowed to self-police,” she said.

“Even if they’re following the letter of the law, the cumulative effects are problematic for the whales.”

Transport Canada did respond to a request for comment from Canada’s National Observer on marine mammal protections before publication deadline.

Too many people on earth

Too many people on earth
Too many people on the oceans, invading the territories for marine life that need undisturbed waters for life, for breeding, for feeding, for uncontaminated water.
Too many factory fishing boats vacuuming up the marine life column, stripping all the "assets" of the ocean - whether or not it has any commercial value in feeding humans - of which there Are Far Too Many On This Overburdened Earth!