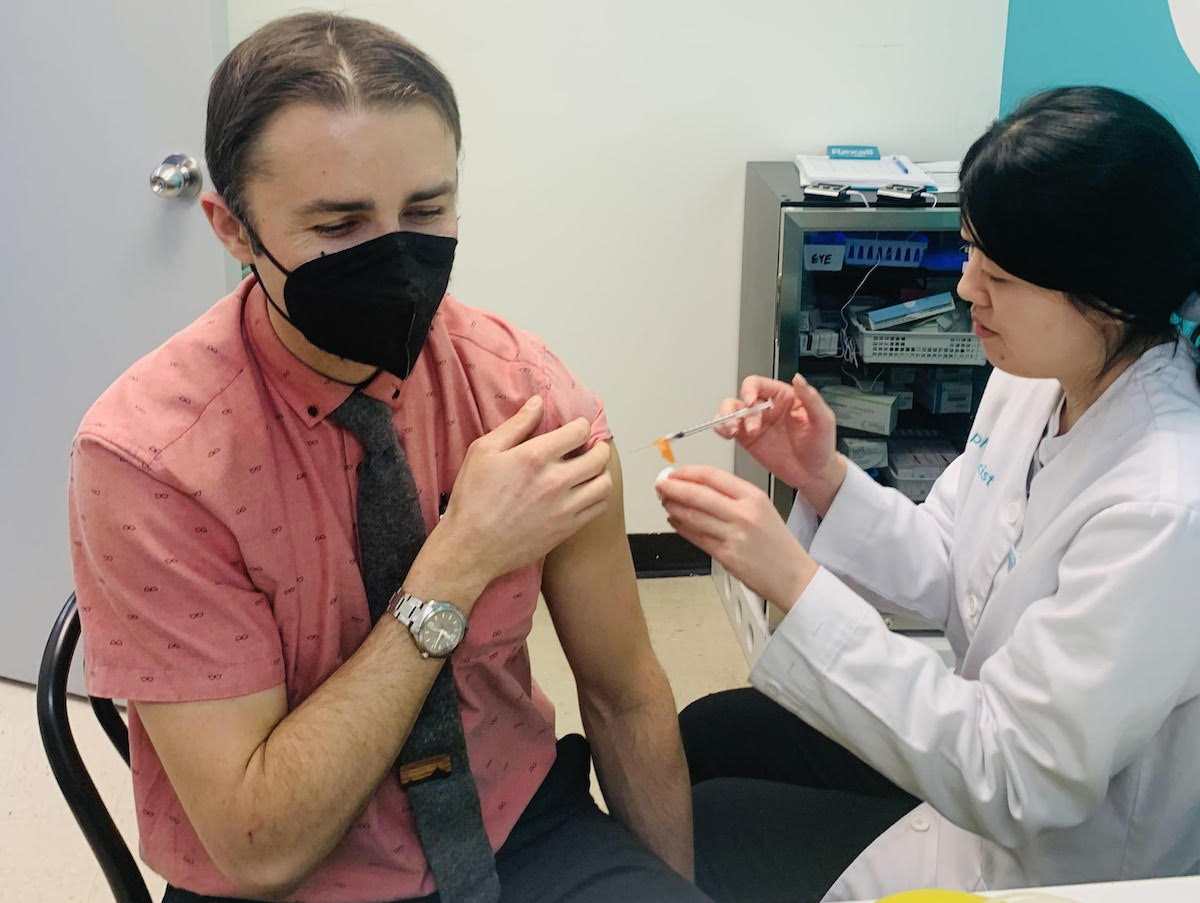 Dr. Alex Nataros, getting a COVID shot above, expects to be the only ER doctor on staff at Port Hardy Hospital come July. He wants B.C.'s Health Minister Adrian Dix to allow him to hire physician assistants. Photo submitted
Previous story
Next story

Port Hardy Hospital’s emergency room is headed for life support, says the only ER doctor expected to be available as of July 1.

Of the four local doctors on the roster at the largest hospital in northern Vancouver Island, one tendered a resignation in March and two others recently announced their departure at the end of June, said Dr. Alex Nataros.

The North Island health region, which serves a population of at least 12,000 residents, has been in an ongoing and deepening crisis since the beginning of summer with prolonged or repeated closures to the emergency rooms in Port Hardy, Alert Bay and Port McNeill due to the acute lack of doctors and nurses in hospitals, a situation aggravated by the lack of primary care physicians available in the community.

“It’s a classic situation seen right across Canada and B.C., where a local community hemorrhages doctors and nurses because of lack of support and services and then basically the situation collapses,” said Nataros.

“We can't afford to let this collapse because people will die.”

The Port Hardy ER has been closed overnight, from 5 p.m. until 7 a.m., since Dec. 22. On Friday, Island Health announced those closures will continue until at least Feb. 6. The closure will allow the consolidation of staff to provide consistent 24/7 emergency room services at Port McNeill Hospital, 42 kilometres south of Port Hardy, the health authority said.

To better meet Port Hardy’s urgent care needs, Nataros has been advocating that the B.C. Ministry of Health allow him to hire physician assistants (PAs).

A mid-level health-care professional, PAs are trained at various post-secondary institutions in the country and have been employed by the Canadian military for decades and in other provinces, including Alberta, New Brunswick, Manitoba and Ontario, Nataros said. The physician association Doctors of BC has been advocating for B.C. to incorporate PAs into the provincial system for almost a decade, he noted.

PAs work under the supervision of a doctor and are able to conduct patient interviews and physical assessments, order and interpret diagnostic tests, formulate and monitor treatment plans, perform and assist in minor surges and prescribe some medications. Nataros formerly worked with PAs in rural and remote communities in Manitoba with great success, he said.

“I've yet to meet a doctor who's worked with a physician assistant that doesn’t provide glowing reports about them,” he said, saying PAs allow doctors to extend their reach, especially when practising in a range of patient care settings like medical clinics, long-term care facilities, remote communities and in hospitals.

“We can't afford to let this collapse because people will die," says Dr. Alex Nataros, expecting to be the only remaining physician serving the Port Hardy Hospital emergency room as of July. #RuralHealthcareCrisis

“It's a transformative model of health-care delivery for rural, remote communities, and I’ve only got one set of hands.”

Port Hardy Mayor Pat Corbett-Labatt is also urging B.C. Health Minister Adrian Dix to consider PAs as an alternative tool to deal with the long-term staffing crisis in the region that currently sees the hospital closed approximately 25 per cent of the time.

The Port Hardy District Council strongly supports a proposal to hire PAs for a pilot project in Port Hardy starting June 1, as formally requested by the Canadian Association of Physician Assistants to the ministry, Corbett-Labatt wrote in a letter on Jan. 20.

The Health Ministry recognizes the contributions PAs can make to health-care delivery and is actively exploring their inclusion as a new classification of health-care worker in B.C., an email from the minister’s office said.

However, Dix’s office did not clarify when physician assistants might be able to work in the B.C. system, nor if the ministry will allow a pilot project to go ahead in Port Hardy.

Introducing a new health profession requires careful consideration and significant resources to properly evaluate where PAs could fit and the role they’d play in the system in an efficient manner, the email said.

The ministry recently announced a new category of associate physicians — international medical graduates not eligible for an independent licence who will be able to work under the supervision of an established doctor to care for patients.

Associate physicians' work is similar to the role of physician assistants, the ministry said, adding it has also introduced a new pay model to attract more doctors to family practice.

The ministry did not clarify if associate physicians will be brought in to address the acute and prolonged staffing crisis in North Island.

"Together with Island Health, we are working to recruit doctors to cover current and pending vacancies in the [North Island region], and we will have more to share about this in the coming days,” the ministry said.

Island Health promised to deliver a solution to the staffing crisis in November following an emergency roundtable with medical professionals in the community, Nataros said.

“We're near the end of January and we've yet to receive any plans,” he said, noting health-care workers remaining in the region get little support from the health authority.

“Frankly, Island health is not taking the crisis on the North Island seriously,” Nataros said.

PAs are a practical, cost-effective and potentially immediate solution that bypasses any involvement of Island Health, he said, noting he has one person lined up who he can hire on the spot.

“I’m trying to find and demonstrate solutions,” he said.

“I'm going to pay for their salary and benefits out of my own pocket. I'm so clear that it's going to be a winning strategy.”

Unfortunately this situation is so typical of government-controlled public services!!! Mr. Dix is obliged to follow the status quo, which means continuing to make statements about the dire situation, ordering another study, doing some more navel-gazing consultations with uninformed administrators, and every other action possible EXCEPT actually following the advice of the EXPERTS - the overworked physicians themselves!!! The fact that physician assistants are employed in other jurisdictions in this country reveals another glaring problem with health care in Canada: standards and policies such as this MUST be made FEDERALLY! There are only a few issues that are so unique to specific locations that they must be acted on locally.
Thank you.

Bureaucracy is a problem.

Bureaucracy is a problem. But it's also kind of necessary. And I hate to tell you, but it exists in big organizations of all sorts, private as well as public. Read your Dilbert. It's just, in private organizations the bureaucracy's theoretical objective is not to help the public.