Canada in the top ten

This week, we learned Canada is one of the top 10 countries most responsible for bringing climate destruction upon the world. On a per capita basis, we rank No. 1.

The dismal ranking comes from researchers at Carbon Brief who tallied up the amount of climate pollution released since 1850. For the first time, the tally includes logging and land use change.

It’s not a top 10 list to be proud of. But it’s both important and useful. Important, because the amount of historical emissions goes to the heart of climate justice, as well as the fundamental nature of the climate crisis. And useful, because Canada’s position on the list impacts public debate over the urgency of slashing emissions.

Let’s take the second point first. You often hear government, industry and cranky uncles arguing that Canada is but a teensie part of the global problem. It’s a compelling argument for those predisposed to gradual, nondisruptive change (a category that includes most of us, most of the time, if we’re honest).

But we know that people respond to the factoid that Canada is one of the 10 biggest emitters in the world. In focus groups, it’s a real conversation-changer and seems to be one of those rare moments where a sterile piece of information activates deeply held values.

The rankings also drive home the question of climate justice. We’ve already filled the sky with so much carbon that 1.5 degrees is slipping beyond reach.

Carbon Brief estimates we’ve already burned through 86 per cent of the carbon budget. If we’re going to have even a 50-50 chance of staying below 1.5 degrees, there’s just 14 per cent of the budget left.

Which countries should get how much of that remaining budget? Which nations should cut climate pollution first and fastest? And how much should those most responsible for our predicament pay to those forced to adapt to impacts and develop new energy systems?

Those questions are central to global debates over climate finance coming to a head at this year’s UN climate negotiations.

“Historical responsibility for climate change is at the heart of debates over climate justice,” writes Simon Evans at Carbon Brief. “History matters because the cumulative amount of carbon dioxide ... is closely tied to the 1.2C of warming that has already occurred.”

Our intuitions often fail us badly when it comes to climate change. Our brains have a hard time wrapping themselves around cumulative problems. We tend to focus on “reducing emissions,” but the climate only reacts to the total that’s already in the sky.

If you’d like to dig further into historical emissions, check out John Woodside’s Any way you slice it, or this animation of the rankings changing over time by Carbon Brief.

Which countries are historically responsible for climate change?

Environment is the top issue for Canadians

For the first time since the pandemic began, Canadians told Nanos the environment is their top “issue of concern.” According to the company’s weekly tracking, this was the first week since March 2020 that COVID dropped out of the top spot, while the environment continued on a steady upswing toward pre-pandemic levels. 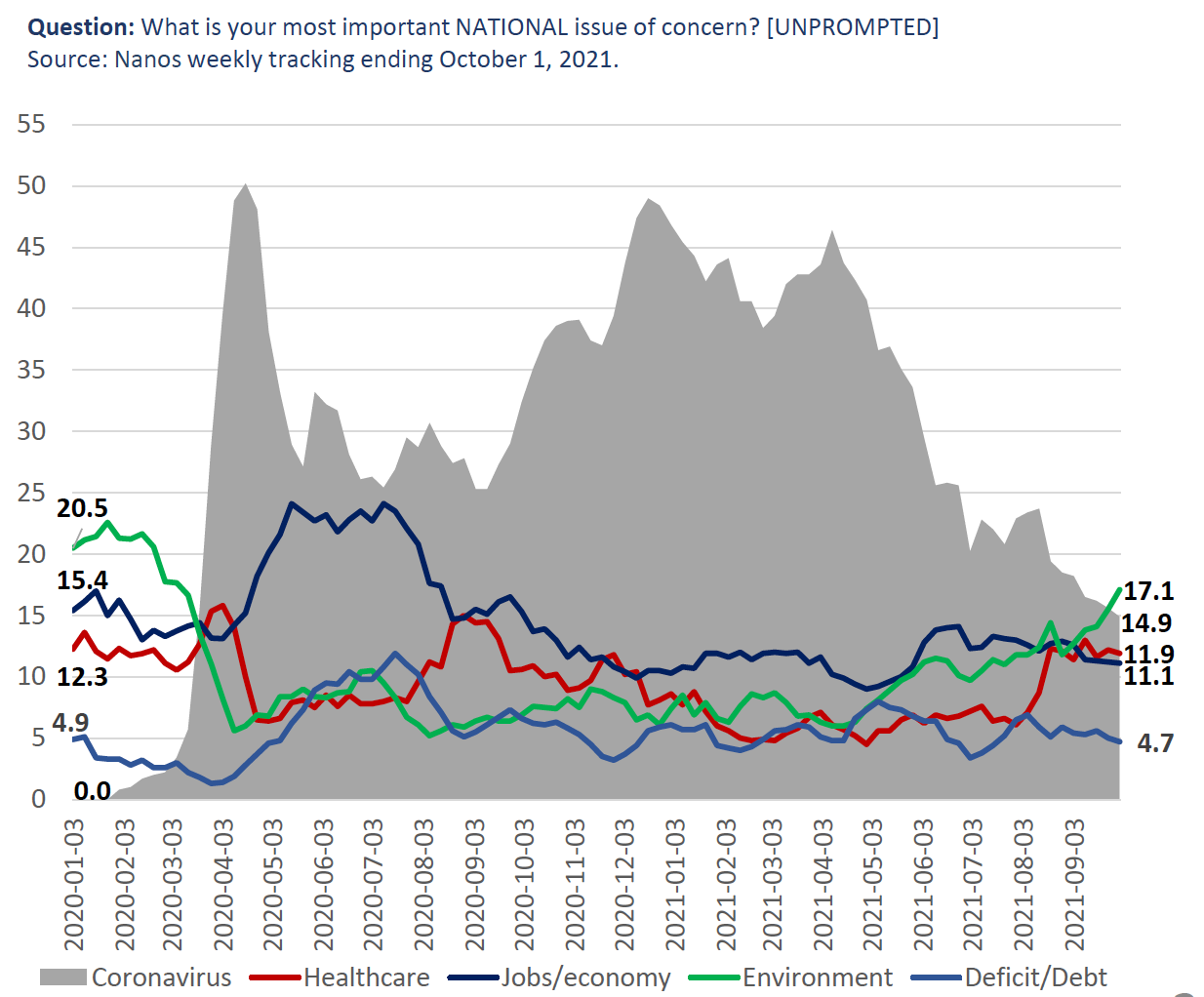 The Nobel Prize in physics was awarded to scientists who developed the massive computer models that simulate how the land, ocean and atmosphere interact and the effects of climate pollution on our little planet.

The prize for chemistry was also shared by two scientists working in molecular construction leading to breakthroughs in solar cells and batteries.

The physicists are Syukuro Manabe, now at Princeton, and Klaus Hasselmann at the Max Planck Institute in Germany. Manabe co-authored a 1967 paper that was voted “most influential climate change paper of all time” by his peers. They shared the prize with Giorgio Parisi of Sapienza University in Rome who studies atomic patterns in metals.

It was a big week for Princeton and the Max Planck Institute: the chemists, David MacMillan and Benjamin List, also work in labs at those universities.

And the Peace Prize went to journalists Maria Ressa and Dmitry Muratov, from the Philippines and Russia.

These were the first Nobel prizes in science awarded to climate researchers (the chemistry prize went to work on the ozone hole in 1995). But the Peace Prize went to Al Gore and the Intergovernmental Panel on Climate Change in 2007, and the prize for economics was given to William Nordhaus and Paul Romer in 2018 for their work on carbon pricing and the economics of climate change.

You’ll often hear oil and gas spokespeople arguing the industry isn’t subsidized and any claim to the contrary is some kind of hippie economics. Well, the hippies at the International Monetary Fund just released their estimate: “Globally, fossil fuel subsidies were $5.9 trillion in 2020.”

The IMF puts Canada’s subsidies at US$64 billion per year.

“Efficient fuel pricing in 2025 would reduce global carbon dioxide emissions 36 percent below baseline levels, which is in line with keeping global warming to 1.5 degrees, while raising revenues worth 3.8 percent of global GDP and preventing 0.9 million local air pollution deaths.”

In related news, Canada’s oil industry has asked the feds to pay for 75 per cent of the cost of building carbon capture facilities.

Reuters’ Rod Nickel writes: “Although the government calls its proposed carbon capture support a tax credit, CAPP (Canadian Association of Petroleum Producers) wants it to function more as a grant.”

How big is our carbon price, really?

Why are Canadian vehicles the biggest gas guzzlers in the world? It might have something to do with how much we charge for gasoline.

Barry Saxifrage compared gasoline taxes across all OECD countries and found that even if Canada implements a $130 carbon tax, “We'll still be charging much less for our tailpipe emissions — in 2030 — than nearly every other OECD nation charges today.”

Vancouver may have a progressive green reputation — the current mayor even got arrested blockading the Trans Mountain pipeline. But climate advocates lost a key battle at city council this week. That same mayor cast the deciding vote against a plan to help fund the city’s climate emergency program by charging parking fees for high-polluting vehicles bought after 2023.

None of the councillors voting against the plan offered any alternatives to fund the city’s Climate Emergency Action Plan, which was approved unanimously in 2019.

Last week, we took a look at the divestment movement. There was a big move on that front this week: the largest university system in the U.S. announced it’s getting out of fossil fuels.

Chancellor Joseph Castro says the decision is “consistent with our values ... but also to ensure strong future returns on the funds invested by the university."

The California State system has almost half a million students and approximately $5.2 billion in investments.

And then, on Friday, Dartmouth announced its divestment from fossil fuels, following years of activism from students and faculty.

Here are two particularly good articles from the special report on COP26 this week:

Catherine Abreu on the 90 climate justice organizations calling on Mark Carney to push harder for banks and other financial institutions to abandon fossil fuel investments.

And Cloe Logan’s overview of the four key goals for COP26 and Canada’s role in meeting them: Why Canada has an essential role to play at COP26

You can find all the articles in the special report here.

A “sidewalk tax” for Saskatchewan?

A group in Saskatchewan is spoofing the province’s new tax on electric vehicles by calling for a “sidewalk tax.”

There are only 600 electric cars in Saskatchewan, but the provincial government has imposed a $150 annual tax on EV owners, despite pushback from locals and the federal government.

The idea isn’t completely crazy: EV drivers don’t pay fuel taxes, which fund road maintenance. But there are so few EVs in Saskatchewan that the tax is clearly an ideological move.

The new group calls itself Saskatchewanians for Sidewalk Sustenance (SSS). With tongue firmly in cheek, Lou Acera, the group’s president, says: “Every day, thousands of people walk all over our sidewalks, push heavy strollers and shopping carts, even use motorized vehicles and bicycles. But are they contributing to the extra upkeep? This makes sure they do.”

SSS suggests adopting the California system where the levy was delayed until electric cars top 1.3 per cent of the fleet. You can follow along with the fun on their Twitter feed.

I’ll leave you with a podcast on climate anxiety. It’s from Ten Percent Happier, a mindfulness program. This episode is a conversation with meditation teacher Jay Michaelson, who provides some simple practical exercises to do when you’re freaking out (I sure could’ve used “box breathing” during the heat dome). But also a refreshing perspective for those who don’t buy the argument climate change will be solved one mindful mind at a time.

That’s all for this week. Thank you for reading Zero Carbon. You can email me with your thoughts or suggestions for future newsletters at [email protected]

Canada’s National Observer, Any way you slice it, Canada is one of the worst emitters on the planet

Carbon Brief, Which countries are historically responsible for climate change?

Piers Forster, The Conversation, The most influential climate science paper of all time

The Guardian, Fossil fuel industry gets subsidies of $11m a minute, IMF finds

How big is our carbon price, really?

Canada’s National Observer, Saskatchewan is charging EV drivers $150 to use the road

See also: Vancouver aimed to be the greenest city in the world by 2020. What happened?

Canada’s National Observer, Saskatchewan is charging EV drivers $150 to use the road

Ten Percent Happier, What to do About Eco-Anxiety with Jay Michaelson