It was the paper that launched a $40-trillion divestment movement. Ten years ago, Mark Campanale and his little team released “Unburnable Carbon,” a dense financial analysis showing that 80 per cent of the world’s fossil fuel reserves must never be burned.

The whole notion of “stranded assets” was so obscure, so alien to the financial world that Mark didn’t even bother going to the public launch. “I only thought maybe a handful of people would pay attention,” he told me last year. Instead, he went with his wife and kids to the Latitude music festival in Suffolk, England.

It’s a good thing he chose a career in finance rather than marketing. Fast-forward to today and Carbon Tracker’s concept of a “carbon bubble” is giving financial regulators heartburn and is broadly accepted by central bankers and even the biggest oil majors. Naomi Klein and Bill McKibben latched onto the report’s findings to launch the global fossil fuel divestment campaign.

Now, 10 years on, Carbon Tracker’s much bigger research team has updated the report and, this time, Mark showed up.

The findings aren’t great: there has been a surge of focus on climate finance but there is also 40 per cent more fossil fuel listed on the world’s stock markets than 10 years ago.

“Fossil fuel reserves are worth $113 trillion at current prices, but 90 per cent has to stay in the ground to have a hope of achieving 1.5 degrees,” Mark outlined. “That’s the carbon bubble.” 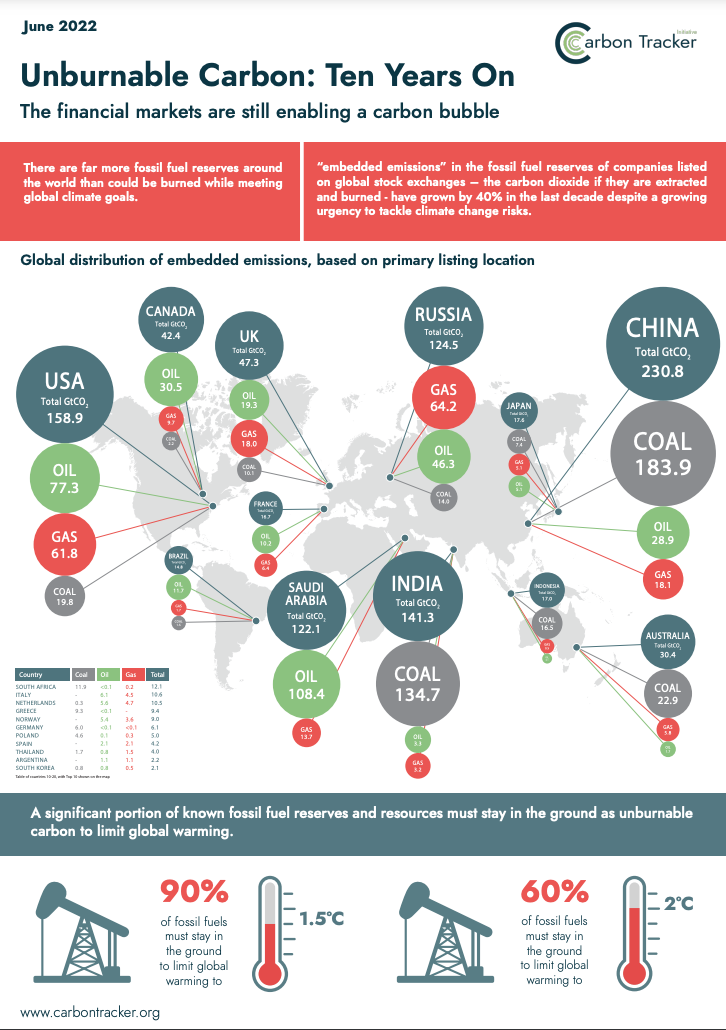 The bottom line is that companies and investors are banking on something like $100 trillion in revenues they think they can realize but can’t.

Those kinds of numbers are well into the realm of “systemic risk,” a sanitized term that really means something that would “take us all down with it.” But the risk isn’t spread evenly among financial centres and companies: the majority of stranded assets — some $600 billion — are held by companies listed on a small handful of stock exchanges.

"In absolute terms, this stranded asset risk is concentrated in the financial centres of New York, Moscow, London, and Toronto."https://t.co/wc6gFABY7g

The feds closed a loophole and released the long-delayed Clean Fuel Standard this week. Oil and gas companies were lobbying for their exports to somehow give them a break even though the regulation is focused on domestic fuels. The new regulation is expected to cut about 18 million tonnes of greenhouse gas emissions in 2030 — five to six per cent of what Canada needs to eliminate to meet its current targets.

A message from Ukraine

Ukrainian lawyer Svitlana Romanko and her colleague Oleh Savytskyi are pleading with Canadians not to be fooled — the push for new LNG export facilities in Canada isn’t about “helping Europe.”

“What we face today is the war of oil and gas against all of humanity.”

Their call was echoed by the Financial Times (oh, for the day when Canada’s financial pages catch up). The FT’s editorial board writes: “The overall answer to today’s energy squeeze and to the climate crisis is the same: a ‘massive surge’ in investment to accelerate the transition to clean energy.

“Governments could do more through carefully targeted information campaigns to help consumers understand how to conserve power, and explain the real reason, beyond climate efforts, why prices are so high. Russia should not be allowed to achieve through energy blackmail what it cannot achieve on the battlefield.”

The U.S. Supreme Court capped off a run of horrendous decisions by ruling against Obama-era limits on carbon emissions from power plants. It says a lot about the state of America that some astute climate hawks are relieved it wasn’t “as bad as it could have been.”

This was just too weird a case for them to go full ham but if the perfect case is not already on its way to SCOTUS it will be soon.

Last week, we looked at “fossilflation” and Max Fawcett dives into the same topic in What’s driving inflation? The fossil fuel economy.

“‘Electric federalism’ will protect Canadians from the whims of Russian dictators, Saudi princes and the rest of the global fossil fuel industry,” Max writes.

“This is the nation-building project Canada needs right now: not another pipeline that helps enrich a single province and industry, but investments in our long-term economic and environmental resilience that reach from coast to coast to coast.”

Not the Onion (or Walking Eagle News)

Ontario’s new minister of natural resources has been named in a court case over endangered species. Graydon Smith is accused of harming or harassing Blanding’s turtles while mayor of Bracebridge, Ont.

Don’t even talk about it

Most people on Facebook don’t hear anything about climate change most weeks. That’s according to a global survey from Yale and Meta. 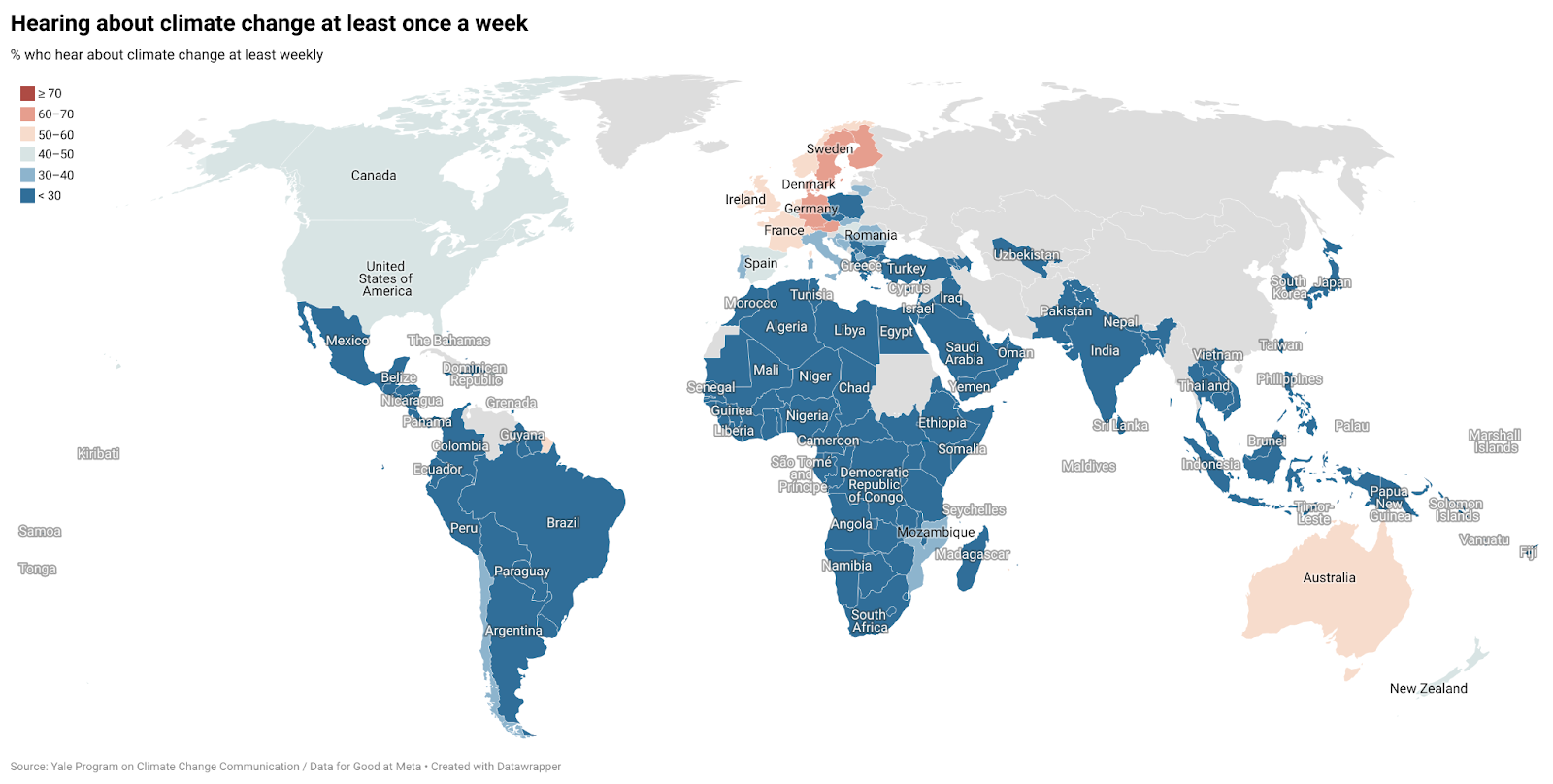 The survey included 1,026 Canadian Facebook users and also found only the slimmest majority of us (52 per cent) understand climate change is “mostly” due to human activities.

Nova Scotians are worried that Kameron Coal is looking to reopen its Donkin Mine. The mine tunnels from the tip of Cape Breton out under the Atlantic to extract coal for steel-making and had been shut down after more than a dozen roof collapses. Cloe Logan’s report includes a memorable interview with the Sierra Club’s Tynette Deveaux:

“If the government allows Donkin Mine to reopen, they’re either saying they don’t believe the science that the IPCC and other international bodies have put forth — or, they’re saying, ‘Let the Hunger Games begin.’”

Yeah, but what about China?

Sometimes a chart is worth a thousand words:

Offshore wind farms surged in 2021, bringing the total global capacity to 56 GW — only about 0.1 percent of which is spinning in U.S. waters, @GWECGlobalWind report says. But East Coast states are poised to participate soon. My latest for @CanaryMediaInc https://t.co/qdPO1E4sGc pic.twitter.com/B2DTlx4xMD

And it’s not just offshore wind — China has overtaken Europe and the U.S. and is now by far the leader in renewable power generation, according to BP’s latest Review of World Energy.

After the Doug Ford government gutted Ontario’s climate laws, seven young people lawyered up against the threat to their constitutional rights to life, liberty and security. As their case winds its way to court, Morgan Sharp reports they’ll be joined by the Assembly of First Nations, Indigenous Climate Action, the Canadian Association of Physicians for the Environment and three other groups.

The end for fossil cars in Europe

The 27 countries in the European Union have hashed out their disagreements and drafted legislation to cut greenhouse gases at least 55 per cent by the end of this decade. One of the new rules is an end to the sale of fossil-fuelled cars by 2035.

Now it’s time for Canada to put its 100% zero-emission vehicle sales by 2035 commitment into law. #cdnpolihttps://t.co/MjAHVvyEi0

But try finding one here

Across Canada, the wait times for EVs can be between 12 and 18 months, reports Tracy Sherlock.

“Canadians want to go electric.” Joanna Kyriazis says. “They’re ready to do it. They’re knocking down doors, with some people willing to wait three years to get their hands on an electric vehicle,” she said.

Lytton, B.C., is planning to rebuild as a net-zero community and council has approved installing solar sidewalks made by Vancouver’s Solar Earth. The company advertises the “World’s Toughest Solar” — able to take an elephant herd (or, more practically, a five-tonne vehicle).

The panels are designed to withstand frigid and searing temperatures but obviously wouldn’t survive another fire like the one that burned Lytton to the ground during last year’s heat dome — not even steel survived unscathed.

Solar Earth’s sidewalk panels are already installed in five countries around the world, including a solar road in China. The first Canadian trial was a solar sidewalk at Thompson Rivers University in B.C. Two years after that 2017 trial, the campus built a “solar compass” with eight radiating arms crossing the campus plaza.

Is it really worth putting solar under that kind of wear and tear? I don’t pretend to know how it’ll turn out but it sure demonstrates that we are very clever primates, capable of brilliant solutions to weighty problems.