If you’ve been watching any of the World Cup (perhaps that impressive, infuriating game against Belgium?), you’ve seen all the ads for Qatar Energy around the pitch. When the soccer winds down, Qatar Energy will be coming to you live off the coast of Canada.

Qatar Energy teamed up with Exxon and landed a big bid for new offshore exploration in the Flemish Pass, a deepwater basin off Newfoundland famous for towering icebergs, ferocious storms and, most recently, the Bay du Nord drilling project.

Last week, the UN secretary general declared that “fossil fuel expansion is hijacking humanity,” calling new exploration or production “delusional.” Even the staid International Energy Agency says there is no room for new fossil projects if we’re going to have even a 50-50 chance of meeting our climate promises.

In addition to Exxon and Qatar Energy, the other successful bids came from BP and Equinor. This, apparently, is what the oil and gas industry has in mind when trumpeting the world needs more Canadian energy. I’ve seen a lot of industry advertising festooned with maple leaves lately. I must have missed its celebratory announcements about Qatar in Canada.

All told, Newfoundland and Labrador awarded $238 million worth of licences for new exploration. It plans to double oil extraction by the end of this decade.

“So, what is happening here is we have a government that is still … releasing exploration licences at a time when it is indisputable that the only way we can stay within some chance of climate safety — is to stop the expansion of oil extraction,” Angela Carter told Canada’s National Observer. Dr. Carter is a Newfoundland-based professor studying the politics of fossil fuels.

“This is an example of how the government of Newfoundland and Labrador and all of these companies are off track, and they're defying climate science. That is really what is at the heart of this matter here.”

The province is defying science, but it's also defying the transition to clean energy and the play is pretty obvious — get millions flowing from the international industry for exploration and build up local expectations and as much momentum as possible so the feds are facing a freight train when it comes time to approve commercial extraction.

Steven Guilbeault tried to lay down a marker in response to the new exploration contracts: “Any new development of hydrocarbons in Canada would have to fit within Canada’s world-leading climate plan, and will have to deliver best-in-class emissions performance, including being net-zero by 2050,” he said.

Legal eagles will tell you that restricting emissions is the main lever the feds have to pull. But, g’wan: net-zero oil? All those hydrocarbons are going to be burned and their carbon spewed into our atmosphere no matter what engineering wizardry is promised for the extraction sites 30 years from now.

Newfoundland is far from the only province whose extraction projects defy climate sanity. Surging emissions from the oil and gas sector are the largest cause of Canada’s climate failure, as Barry Saxifrage illustrated this week. 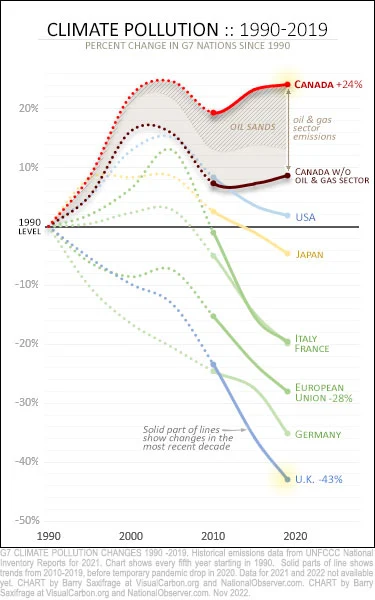 Greenhouse gas emissions from the oil and gas industry have doubled in the past 30 years. Its annual emissions are now 100 MtCO2 higher. By contrast, all the successes in Canada — notably shutting down coal and making electricity cleaner — amount to 60 MtCO2.

While the oil and gas industry is obviously the biggest culprit, you can’t help but notice Canada’s trajectory is going in the wrong direction even without that sector. And the reason is that governments haven’t put effective regulations on transportation, buildings and agriculture. The second-biggest culprit is transportation — burning the oil industry’s products in cars and trucks has driven emissions up 54 per cent since we started promising to cut back climate pollution.

Some weeks it’s hard to keep up with the climate announcements and initiatives coming out of Steven Guilbeaut’s office. While staff stickhandle the forthcoming emissions cap on oil and gas, the clean electricity standard and a mandate for zero-emissions vehicles, in the past few days, the feds made announcements on carbon pricing, adaptation and heat pumps.

Put a price on it

On Tuesday, the feds extended the carbon tax-and-rebate program to three Atlantic provinces, over the objections of premiers like Nova Scotia’s Tim Houston, who claimed it would “unnecessarily punish Nova Scotians and, also, the planet.”

Yes, the planet. That’s really the claim. That’s the pathetic state of play in most provinces — even the remnant Red Tories contorted into confabulation.

Ottawa unveiled a national adaptation strategy to fight heat, floods and fires. Experts in health, disaster preparedness and insurance welcomed the announcement. “It has all the right bones,” said Ryan Ness. “It’s nice to finally have a strategy.”

The $1.6-billion announcement was made in Prince Edward Island and the government described it as a “downpayment” on future programs. It will need to be — Fiona alone caused about $660 million just in insured damages. The feds estimate extreme weather could cause $15 billion a year by the end of this decade.

The adaptation strategy aims to eliminate deaths from extreme heat entirely. It’s a worthy goal, and an ambitious one: we learned this week that over 20,000 Europeans died in heat waves across the continent this summer. More than 10,000 of these “excess deaths” happened in France where temperatures hit 42 C. Records that would have been “virtually impossible” absent the fossil-fuelled crisis, according to scientists at the World Weather Attribution group.

The new $5,000 grant starts in the new year. It’s a nationwide program for buildings that are still using heating oil, which means it will primarily benefit Atlantic Canada. Over half the homes in Prince Edward Island are heated by oil, almost 40 per cent in Nova Scotia (how’s that working out for the planet, Premier Houston?).

The Oil to Heat Pump Affordability Grant is “a bit of a breakthrough in terms of policy at the federal level because it removes the upfront cost barrier, which is what has made Greener Homes inaccessible to Canadians with low income,” Brendan Haley told Natasha Bulowski.

Haley’s organization, Efficiency Canada, has much bigger ideas. Canada could copy the Energiesprong program pioneered in the Netherlands where whole neighbourhoods or groups of buildings of a similar type are retrofitted in one orchestrated push, capturing economies of scale and training a dedicated workforce.

A few other items of note this week:

Today on Black Friday is the perfect day to sue the state over its insufficient climate policies.

So that’s what we did. 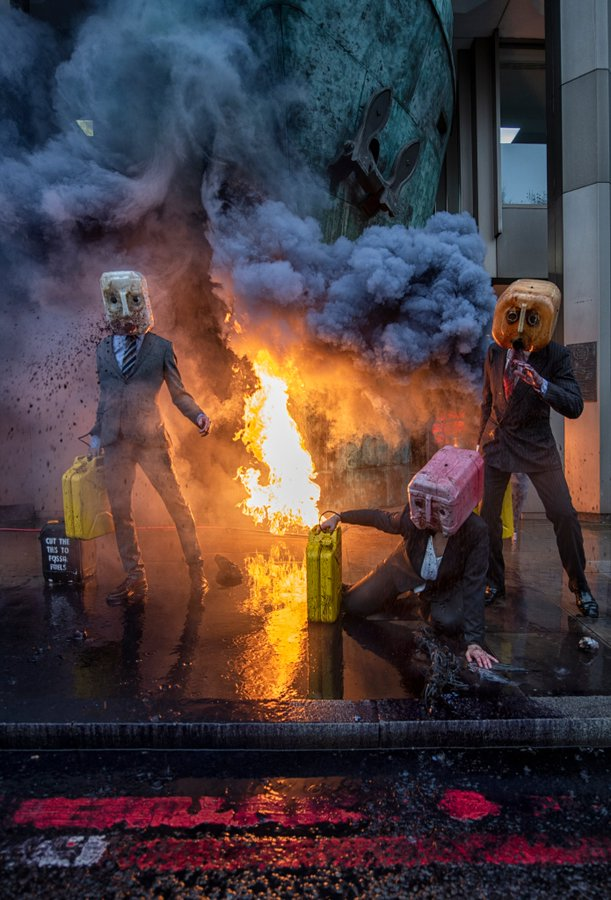 I’ll leave you with a couple of suggestions this week. If you like the long reads, you should check out Elizabeth Kolbert’s Climate Change From A to Z: The stories we tell ourselves about the future. She’s been working on the piece for six months and it shows. “Climate change resists narrative — and yet some account of what’s happening is needed,” Kolbert writes.

But if you’re in the mood for audio, lend David McKie an ear or two. In his inaugural Hot Politics pod, our deputy managing editor digs into Canada’s banks and COP27. You’ll hear from finance specialist Richard Brooks at Stand.earth, veteran climate campaigner Keith Stewart from Greenpeace and John Woodside dialling in from Egypt.

Check out our latest podcast. "Greenwashing at COP27" https://t.co/mF4Z4y3qKl via @NatObserver

If you’d like Canada’s National Observer to amp up climate reporting, please donate to our end-of-year fundraising campaign. Your support drives the climate debate forward.

That’s all for this week. Thanks for reading Zero Carbon. Please forward it along and always feel free to write to me with feedback or suggestions for future newsletters at [email protected]