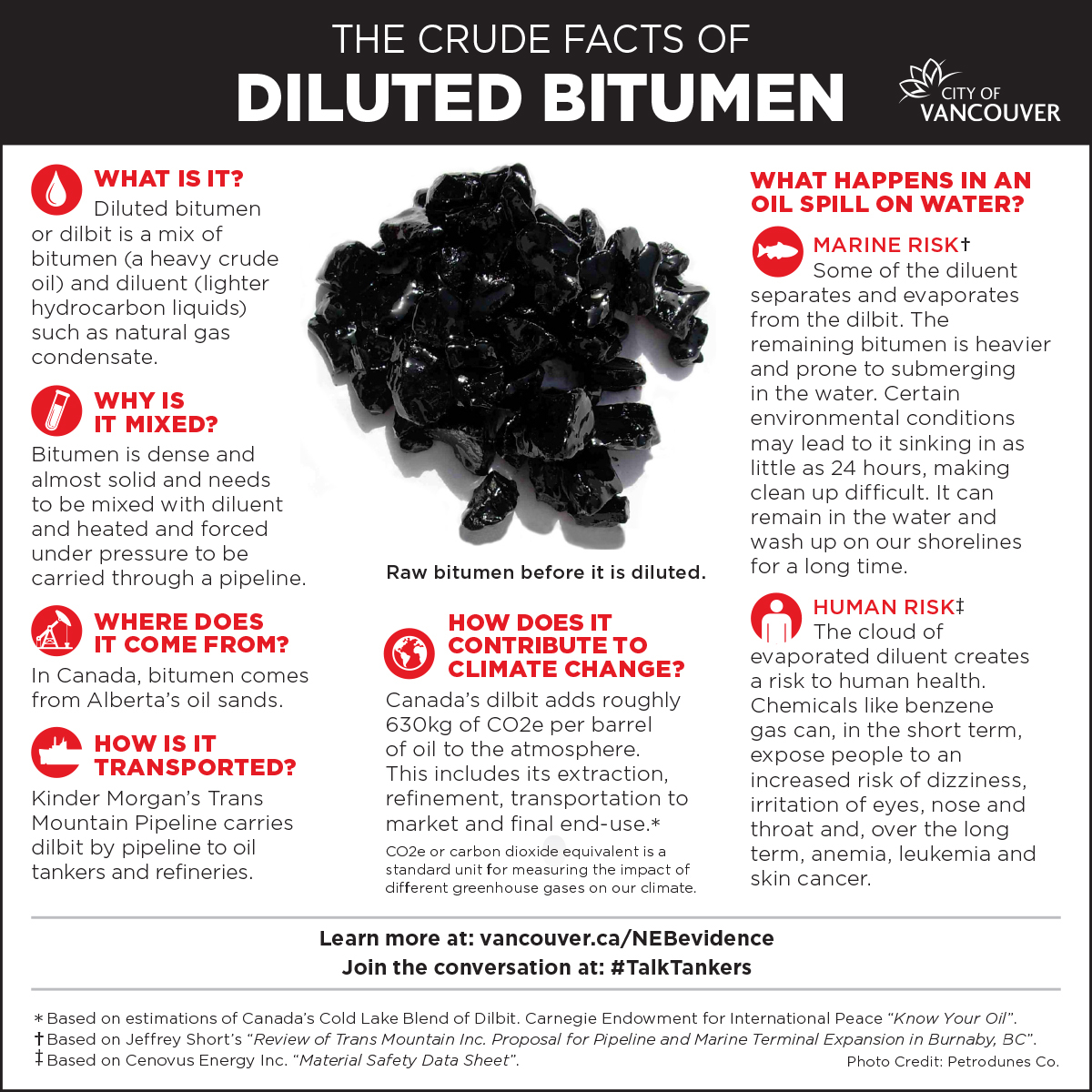 Infographic created by City of Vancouver as part of campaign to educate public about potential devastating impacts of major oil spill.
Previous story
Next story

A large spill of diluted bitumen near Vancouver could kill over 100,000 birds and seriously harm other mammals, according to a new study.

Titled "The Fate and Effect of Oil Spills from the Trans Mountain Expansion Project in Burrard Inlet and the Fraser River Estuary," the study says harbour seals and porpoises could perish in a spill — and the endangered southern resident killer whale population would be jeopardized, elevating their risk of extinction.

“Extraordinarily high densities and numbers of sea and shorebirds, marine mammals and fish make them especially vulnerable to the potentially devastating mortalities should a major oil spill occur in Burrard Inlet or the Fraser River estuary,” notes the study.

Spill modeling carried out by Genwest Inc. showed that up to 90 per cent of oil from a spill can reach shorelines within 48 hours. “Oil stranded in the intertidal zone of a beach establishes ‘effective killing zones’ for sea and shorebirds,” the study reported.

The City of Vancouver, Tsleil-Waututh Nation and Living Oceans Society commissioned the study, which was prepared by Dr. Jeffrey Short, an international expert on the effects of oil spills.

Short has 31 years of experience as a research chemist at the US National Oceanic and Atmospheric Administration, National Marine Fisheries Service. His report will be submitted as evidence to the National Energy Board as part of the Trans Mountain Pipeline hearing process.

Energy infrastructure company Kinder Morgan proposes to build a $5.4 billion second pipeline and expansion near the existing 1,150 kilometre Trans Mountain UCL pipeline between Edmonton and Burnaby. The company wants to increase the pipeline capacity from 300,000 to 890,000 barrels per day.

The firm also envisions an increase of oil tanker activity in the Burrard Inlet from five to 34 a month, adding up to approximately 400 tankers annually.

The new city-commissioned report called the Salish Sea—and especially Burrard Inlet and the Fraser River estuary—one of the most ecologically important coastal marine habitats along the entire Pacific Coast of North America. More than one million sea and shorebirds rely on the Salish Sea and Fraser River for habitat, food and shelter.

The majority of crude oil transported on the expanded pipeline system and exported via tanked is expected to be diluted bitumen (dilbit). Dilbit consists of heavy bitumen (crude oil) and a lighter natural gas condensate.

Spilled on the water, dilbit behaves differently than conventional crude oil. The study says the natural gas condensate components of dilbit begin to evaporate quickly, leaving behind a thick, heavy substance that is prone to sinking in as little as 24 hours, which makes it much harder to recover.

Previous modeling work that Genwest Systems Inc. carried out for the City of Vancouver shows a spill in the Burrard Inlet would quickly impact nearly all the communities surrounding the inlet.

The modeling scenarios show between 50 and 90 per cent of the oil would reach the shorelines within hours, causing significant impacts to human health, the environment and the economy, a summary of the city’s study said.

One expert retained by the city and the Tsleil-Waututh concluded that a credible worst-case scenario oil spill along the tanker route would involve 16-million litres of dilbit.

In a release accompanying the new study, the city pointed out that the Fraser River is the largest single salmon-producing river on North America’s Pacific Coast. The river supports runs of sockeye, chinook, chum, pink and Coho salmon.

The Trans Mountain Pipeline makes over 80 water crossings within the Lower Fraser River watershed, putting millions of salmon that use that river at risk from a pipeline accident or malfunction.

Since 1961, a total of 81 reported oil spills along the Trans Mountain Pipeline have been documented. Four large spills under Kinder Morgan Canada’s ownership occurred, including 200,000 litres seeping from a tank farm in Burnaby in 2009; and a spill of 250,000 litres of crude oil into the Burrard Inlet in 2007.

A number of Lower Mainland communities are acting as intervenors in the National Energy Board hearings on the pipeline. Communities include Vancouver, North Vancouver, West Vancouver, Burnaby, Coquitlam, New Westminster, Port Moody, Surrey and White Rock, among others.

The City of Vancouver will submit evidence to the National Energy Board hearing on May 27 and will present at the oral summary hearings in September 2015.