Can Mulcair pull off an NDP turnaround? 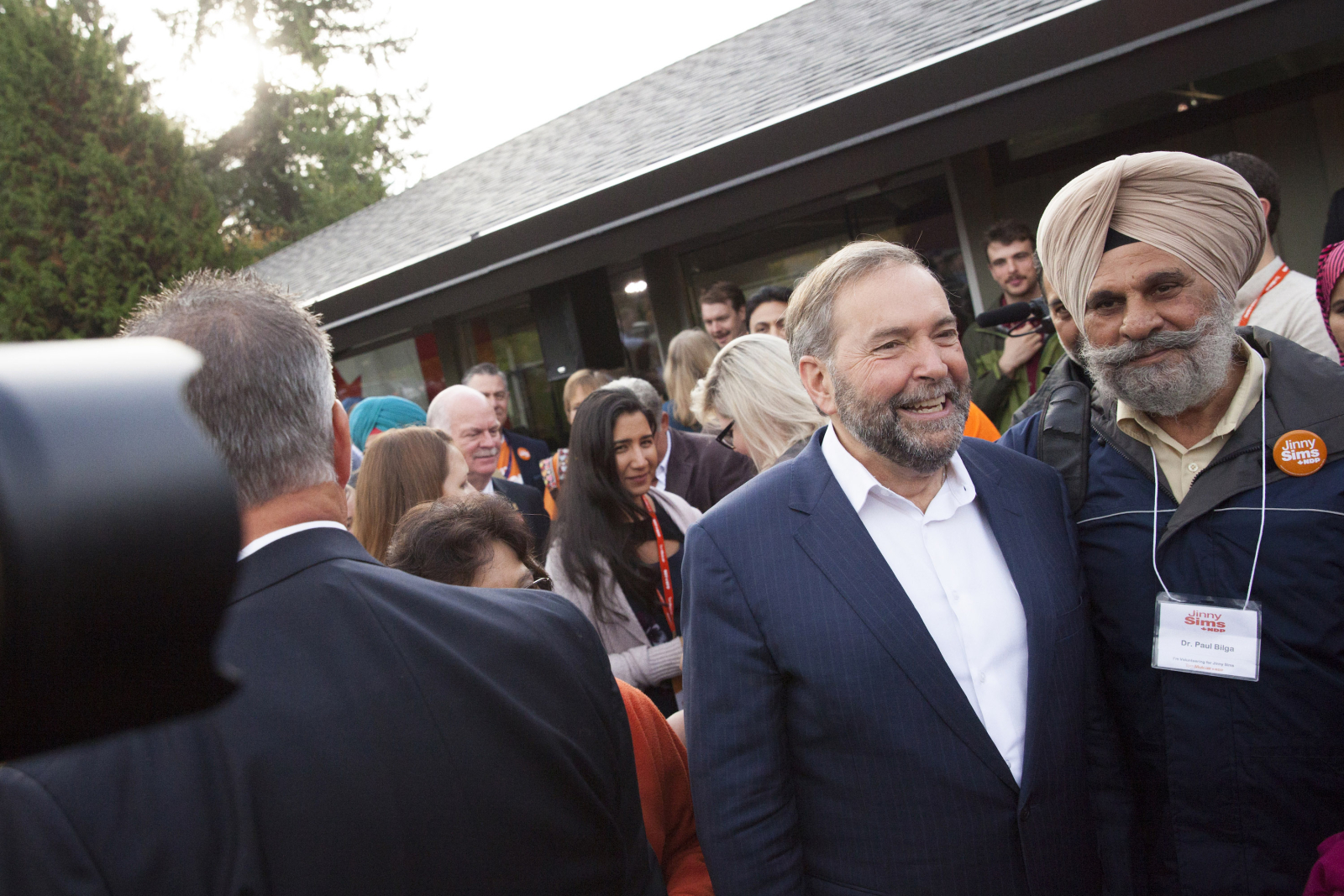 In a topsy-turvy election now seeing the NDP slide from first to third place in polls, Tom Mulcair is fine tuning and simplifying his party's message in a late stage effort to re-ignite Canadian voters.

With rhythmic emphasis on "care," the federal leader said, "It’s really easy in this election —childcare, healthcare, pharmacare, Mulcair,” to supporters who erupted in cheerful laughter at a campaign stop in Surrey, B.C. on Tuesday.

The triple policy push is a reminder of the party’s promises to create $15 per day daycare, hire 7,000 more doctors and nurses, and create a new universal drug plan.

“I will work to deliver the most ambitious improvement in health care in a generation, by lowering prescription drug costs for every Canadian,” Mulcair said.

But will the pledges, that appeal to the party's base, be enough to turn things around for the NDP with Canadians at large?

The NDP now sit at 25 per cent of voters, while Liberals and Conservatives are tied for 32 per cent support, in an average of national polls. That’s a huge turn for the worse from the NDP’s first place-standing at 37 per cent just six weeks ago.

Pollster Mario Canseco says an NDP comeback is still possible, but it’s not looking rosy for a victory.

“The [NDP’s] main difficulty is that the Conservatives are coming back as proper economic managers. They have a surplus that they didn’t have a few months ago. And they closed the deal on the TPP (Trans Pacific Partnership)."

Regarding that giant 11-country trade deal committed to Monday by the Harper government, Mulcair said the NDP is dead set against it, calling it 'secretive' because its details are not known. NDP concerns include lost jobs in Canada’s auto and dairy sectors, as well as environmental concerns abroad.

“I don’t want to trade with a country where everything is produced by using the air, the soil, the water as a universal free dumping ground,” said Mulcair. He added that his party has come a "long way" in becoming open to trade agreements than in the past, and supported a recent South Korea deal for example.

“But we’re smart on trade as well. Stephen Harper is an opportunist on trade —he’s willing to sell out Canadian families [in farming and auto sector]… two weeks out from the election because he thinks it’s good for him. I’m always going to do what’s best for Canadian families.”

Liberals say they want to see the actual TPP text before making any pronouncements, and Greens says they are against any such trade deals with "investor state provisions" that allow allow foreign corporations to launch suits against Canada in private arbitration.

And Harper said at a Monday press conference, "This deal is without any doubt whatsoever in the best interests of the Canadian economy." He also promised to cushion the impact of the trade deal with a $1-billion support program for the auto industry, and $4.3-billion over 15 years to Canadian dairy farmers.

Meanwhile, a Pakistani immigrant who showed up for Mulcair's campaign stop, cheerfully smiled with the leader for a photo. “They’re really supporting every single person —whether they’re Punjabi, Muslim, or anyone —it’s really great to see NDP [supporting the] multicultural community," said Rabina Razique, who came to Canada two years ago.

“I’m really enthusiastic about them. I really want them to win.”

All three main parties are still expected to return sizeable numbers of seats each, and a weak Conservative minority is now predicted.

But Canseco believes Mulcair’s recent debate and campaign performances have been too kind and gentle, and not aggressive enough, compared to his parliamentary attacks on Harper over the Duffy affair for example.

“People who were not necessarily NDP supporters six months ago, and liked what they’ve seen from this leader —who was flawless in sticking it to the government at every opportunity in French and English —were probably a bit disappointed with the debate performances.”

Canseco says this choice, to play if safe as the front runner, has not worked, and has played a larger role in NDP’s slip than say the niqab-citizenship-ceremony issue, he said. Opposition to Energy East, and the rise of the Bloc may be other factors, he said.

With a reassuring, and oblivious-to-the-polls tone, an upbeat NDP campaign video shows the party’s senior campaign advisor Brad Lavigne stating that the New Democrats’ path to victory is easier than the Liberals.

“The Liberals won just 34 seats in parliament in the last election. Which would mean Justin Trudeau and the Liberals would need 100 more seats… that’s not a realistic path to victory.”

Lavigne says the party is now hitting 45 target ridings where NDP candidates "came a strong second to the Conservatives."

The biggest trade zone in history? Five questions about the big TPP negotiations

Where Thomas Mulcair stands on oil sands and climate change