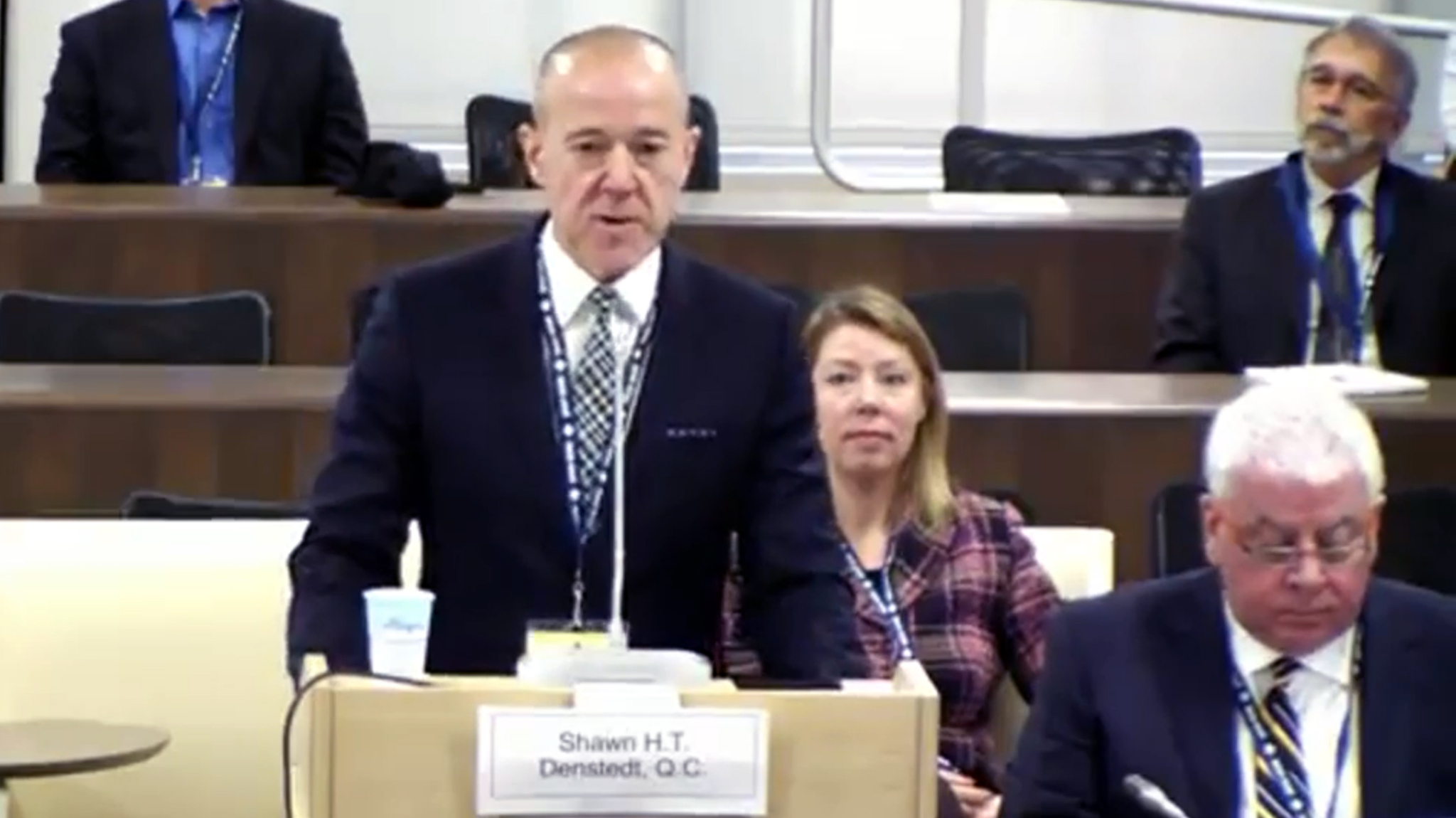 Kinder Morgan lawyer Shawn Denstedt, Q.C., speaking to a NEB panel in Calgary on Thursday, with Kinder Morgan CEO Ian Anderson at his side. Screen shot from NEB webcast.
Previous story
Next story

With the recent clarification that the Liberal government will not require Kinder Morgan to restart its application for the highly controversial Trans Mountain pipeline expansion, the Texas-headquartered energy giant presented its final argument to the National Energy Board on why the Edmonton-to-Burnaby oil pipeline should be built.

“Regardless of the clamour… the project must be weighed against the greater public interest," company lawyer Shawn Denstedt told the Calgary NEB panel on Thursday, with Kinder Morgan Canada's CEO Ian Anderson sitting at his side.

The moment marks the start of what is expected to be a very heated set of oral hearings in Alberta and B.C. that will conclude in February 2016. Fifty-nine intervenor groups — including residents, cities and First Nations —will speak about the proposed pipeline expansion.

The process will also be a key test of the new Trudeau government, which promised to overhaul oil pipeline reviews, take "real action on climate change," shift Canada to a low-carbon economy, and respect Indigenous rights and community wishes.

Kinder Morgan said its $5.4-billion pipeline should be recommended for cabinet approval because the odds of “an accident or malfunction resulting in a significant [oil] spill are extremely unlikely for the project,” said Denstedt, whereas the "economic benefits are highly certain."

Royalties and taxes would flow, and many jobs would be created, including in "marine oil spill response," he said. The project would result in "up to 29 more Aframax tankers" per month to carry oil sands bitumen to more favorably priced world markets. Denstedt insisted there's no evidence the expanded Trans Mountain pipeline, which would pump 890,000 barrels of oil per day, would expand the oil sands.

B.C.'s southern resident orca whales would also face only a "low likelihood" of being struck by the project's resulting oil tankers, he said, because the Port of Vancouver is already very busy with 3,000 ship transits per year. He pledged the company would report any whales strikes it sees.

As for the risk of an oil spill hitting fresh water, Denstedt said "the ecological effects could be reversible."

"The evidence shows fresh water ecologies recover from oil spills in a relatively short amount of time," he said.

The lawyer also chastised a City of Vancouver report that said the project's potential for a catastrophic oil spill represented unacceptable environmental and economic risks. Denstedt said Vancouver's claim was “not credible” and was “a flight of fancy to serve a predetermined position."

The lawyer added, the company's 60-year track oil spill record —of releasing 40,000 barrels of oil into the environment between 1961-2013, according to federal data —was proof the company could be trusted, and that new pipeline technologies would reduce spill risks even further.

In July, new pipeline technology failed to prevent the largest oil spill in Canadian history, when Nexen released 31,000 barrels into the environment near Fort McMurray.

Kinder Morgan ended its arguments by saying its pipeline had the support of "30 Aboriginal groups" in B.C., Alberta, and Vancouver Island. Despite this support, Union of B.C. Indian Chiefs president Grand Chief Stewart Phillip was willingly arrested while protesting the expansion project last year, and North Vancouver's Tsleil-Waututh Nation is currently pursuing a federal court action to halt the pipeline review.

Hopes were high a new Liberal government would change the way pipeline reviews were conducted, despite early signs that Justin Trudeau himself appeared to support the project. In 2014, the then-Liberal-opposition leader told a Calgary newspaper:

"I certainly hope that we’re going to be able to get that pipeline approved. And I hope that Kinder Morgan learns from Enbridge’s experience of short-cutting or going too light on community buy-in,” Trudeau told the Metro Calgary.

But when asked to clarify his position last summer, Trudeau told the National Observer that Liberals would overhaul the environmental review of pipelines.

“Make no mistake about it —Canada needs to get its resources to market. But we need to do that in a way that actually respects the long term interests of Canadians and of our future,” he said in June.

But last week, Trudeau's Minister of Natural Resources Minister Jim Carr appeared to contradict that. The Winnipeg MP told the House of Commons that the overhaul of pipeline reviews will not reset Kinder Morgan's process.

“Mr. Speaker, for those projects that are currently under review, the proponents will not be asked to go back to square one,” said Carr.

"There will be a transition period, that will embody the principals that were in the campaign platform, and in the Prime Minister’s mandate to me, and to the Minister of the Environment and Climate Change. It will be transparent. It will involve consultation with indigenous communities."

Beech clarified Thursday that the Kinder Morgan's pipeline review process wouldn't be re-started completely because "community groups have invested tens of thousands of hours in order to put forward their documentation," he said. "So we wouldn't want all that to be thrown out."

He added, both Minister Carr and Minister of the Environment and Climate Change Catherine McKenna are discussing now how to transition the Kinder Morgan process into a new one, that will expand the scope of the reviews. Currently, climate change and downstream impacts are not permitted topics at the pipeline hearings.

The NEB must make its final recommendation to cabinet by May 20, 2016. The federal cabinet then has six months to decide if the pipeline gets constructed. While under the Harper government, the NEB recommended the approval of Enrbidge's much-maligned Northern Gateway pipeline with 209 conditions.

NDP Burnaby South MP Kennedy Stewart said that by not re-starting the pipeline hearing, Liberals were misleading the Canadian public.

"I would go as far as to say the Liberals lied all the way through the election about what they would do with Kinder Morgan," he said.

Stewart said, because the new Trudeau government didn't immediately table legislation this month to overhaul the NEB, it's now too late. Any overhaul of pipeline review processes is not likely to be in place until 2016 or 2017, following consultation with environmental and Indigenous stakeholders.

It remains unclear if this pipeline will jive with Canada's new approach to climate change. In Paris last week, Minister McKenna avoided a question about whether approving giant oil pipelines contradicts her stated goal of helping the world cap global warming to 1.5 degrees Celsius.

The NEB's Kinder Morgan hearing is presided over by three NEB board members: David Hamilton, Philip Davies and Alison Scott.