By The Canadian Press | News, Politics | April 5th 2016
#50 of 1593 articles from the Special Report: Race Against Climate Change 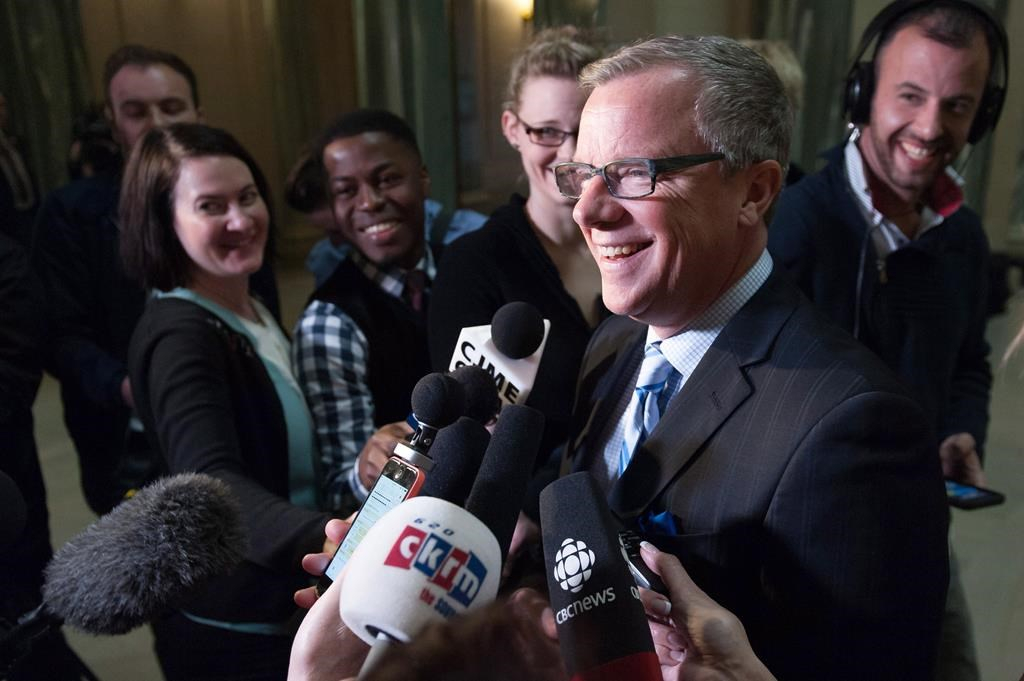 REGINA — Saskatchewan Premier Brad Wall says he’s not setting out to be the lone voice on conservatism among the provinces or to nag Prime Minister Justin Trudeau.

But Wall says he will speak out for Saskatchewan on the national stage.

"We’re not going to try to be a thorn in anyone’s side, but we’re going to defend the province’s interests and advocate for our energy sector," Wall said Tuesday in Regina.

The premier spoke the day after his Saskatchewan Party resoundingly won a third majority election. His party captured 51 of the 61 seats in the legislature.

"I look forward to working with the Government of Saskatchewan in a spirit of co−operation and collaboration," Trudeau said in a statement.

Wall says he appreciates that the prime minister also called.

"But I also indicated that we want to continue to talk about the employment insurance decision the government’s made that has excluded two−thirds of our oilpatch and then Edmonton as well. And he said, obviously they’ve made a decision, but they’re certainly willing to engage in that discussion," said Wall.

"So we’re going to continue to make the case that now is not the right time for a tax of any kind for our economy, including a carbon tax."

Ottawa made changes to extend employment insurance to help 12 areas hit hard by the resource downturn.

But it only applies to regions where the unemployment rate increased by two percentage points or more for a sustained period over the last 12 months when compared with the lowest point between 2014 and early 2015.

Wall argues that was a mistake because it excludes workers in southern Saskatchewan’s oil−producing region.

He also continues to oppose a national carbon tax, saying it would hurt the Canadian economy right now, and plans to keep pushing Ottawa to support the Energy East pipeline.

But Wall said Tuesday that he is open to a broader price on carbon in the future.

Wall, 50, has carved out a niche on the national stage as a defender of the province and a strong voice for small−c conservatives, especially in the West.

"I think the Liberal government is not shaking in its boots because he won. It was expected he would win," Wiseman said in an interview.

"If anything, you know, he’s playing defence."

"The other thing is, Saskatchewan is a small province. It’s the smallest province outside of the Atlantic region, so it doesn’t have the same fire power that a province like Ontario, Quebec and even Alberta would have," added Wiseman.

Wall says he’s not alone on many issues.

He says he has fiscal ideas in common with Nova Scotia Liberal Premier Stephen McNeil and notes that New Brunswick Premier Brian Gallant also supports the Energy East pipeline. British Columbia Premier Christy Clark is a pretty free−enterprise oriented premier, "a good friend" and "someone that we’re going to work closely with on Western Canadian issues," he said.

"On certain issues, perhaps we’ve been on our own a little bit, or you know without a lot of allies, but by and large there are a number of premiers we’re going to continue to work with and so I don’t feel lonely at all," said Wall.