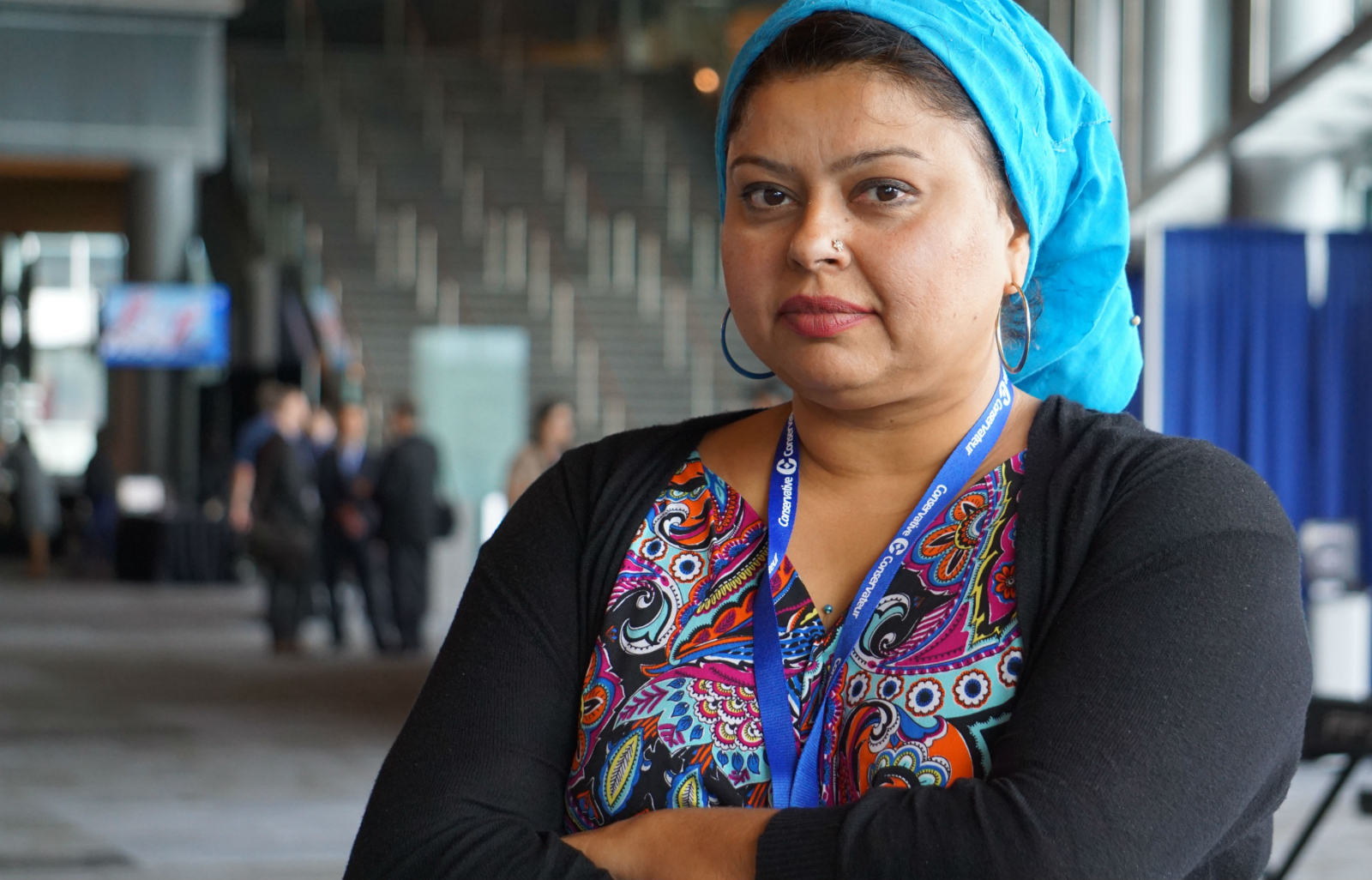 Ontario delegate Uruzurum Heer fearlessly challenged the Conservative Party on race-baiting during the 2015 election on Fri. May 27, 2016 at the Conservative Convention in Vancouver. Photo by Elizabeth McSheffrey.
Previous story
Next story

When Muslim Tory supporter Uruzurum Heer stepped up to the microphone on Friday morning at the Conservative Convention, it was a matter of passion and instinct. Voice quivering and tears in her eyes, the Brampton-South, Ont. delegate shamed the executive director of the Conservative Party for Stephen Harper's fear-mongering and race-baiting during the 2015 federal election.

"How would you feel if you were me?" she demanded. "For the first time I felt like I didn't belong here and this is my country. It's unfair to my people."

She was of course, referring not only to Harper's widely-criticized proposal to ban niqabs during citizenship ceremonies, but his last-minute snitch line, the Barbaric Cultural Practices Act, as well. The former alienated Muslim women, and arguably incited a spat of violence against them in the days leading up to the vote, while the latter targeted immigrants, hyped up fear of terrorism and perpetuated negative stereotypes.

The confrontation was bold and unexpected, and Tory executive director Dustin van Vught visibly stumbled. He did not condone or deny her allegations while simply indicating that the party "has some work to do."

"We know we have to win, and to win we have to have a very large tent that includes everybody," he said.

Heer didn't flinch, and encouraged the party to think long and hard about exclusion over the "eight to 10 years" it will take for it to be elected once again. There are roughly one million Muslims in Canada, she said, many of whom — like her — will walk away from the Tories forever if the party doesn't change its ways.

"It was really hard for me to come back [to the party] after being disappointed in the election," she told National Observer after the standoff. "I think there are a lot of open ears willing to listen, but unfortunately, it still feels like they're stuck on, 'We need to just keep going with our campaign.'"

Being a Muslim under Harper rule was tough, she said, but being a Muslim during the election was even tougher. She and other Muslims she knows felt sidelined by the Tories' divisive rhetoric, as though they somehow "didn't belong in Canada."

"Nobody wanted to listen us," she told National Observer in an interview after the stand-off. "I was constantly told, 'You can't say this or that, you can't fight the prime minister's office.'"

She thought she had seen it all with the niqab debate, but called the Barbaric Cultural Practices act "the cherry on top" and the "icing on the cake." The risky move motivated more than 80 per cent of Muslims to come out and vote, she added.

But Heer wasn't always a Conservative voter; originally from Hamilton, Ont., she comes from a traditionally Liberal family. She made the switch after working for her riding's MP, a man whom she described as "kind" and an advocate for her Muslim community.

A fan of the Conservatives' fiscal responsibility and tax policies, she said she never could have predicted how the party would play the race card during the election. Coming to the convention was the "hardest $1,000" she ever spent, but ultimately, she's glad she came.

While there's no apology that can make up for what happened, she said, the convention is a "second chance" to do better in the future.

WATCH: Conservatives must be "kinder"

Ontario delegate Uruzurum Heer scolded the Conservative Party for a campaign of division and race-baiting during the 2015 federal election that targeted immigrants and Muslims. The confrontation took place at the Conservative Convention in Vancouver, B.C. on Fri. May 27, 2016. Video by Elizabeth McSheffrey.