Anti-whaling activist Paul Watson gets back his Canadian passport, four years after Harper revoked it 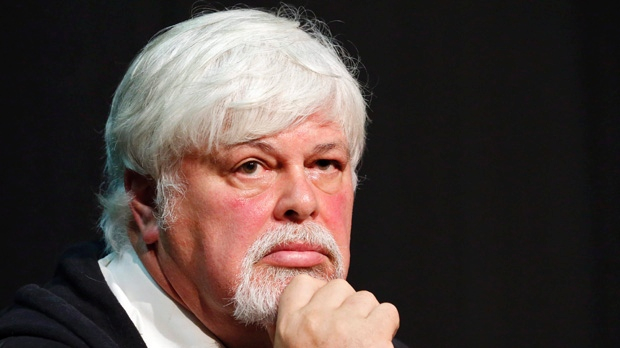 Paul Watson, founder of Sea Shepherd Society, during a press conference in Frankfurt, Germany, on June 13, 2012. File photo by the Associated Press.
Previous story
Next story

Paul Watson, an anti-whaling activist known as one of the founding members of Greenpeace, is finally getting back his Canadian passport, four years after it was mysteriously revoked by the Harper government.

Watson, who now lives in France, told National Observer he received the passport on Monday after a long ordeal that included several battles with the former Conservative government, thanks to a bit of help from Green Party Leader Elizabeth May.

"I met her at the Paris (climate change) Summit and she signed as my guarantor on the passport form," said Watson, who was born in Toronto.

Watson is on an Interpol red list, an international watch list normally reserved for dangerous criminals, because of an outstanding warrant from Japan over trespassing-related charges. Japan has been clashing with the boats from the environmentalist's Sea Shepherd Conservation Society for years over the country's whaling activities.

After he was arrested on the Japanese warrant in 2012 in Germany, officials seized both his American and Canadian passports, eventually returning them to the two countries. Although the U.S. returned his American passport and told him it has no plans to arrest or deport him based on the Japanese warrant, Canadian officials, under former prime minister Stephen Harper's government, refused to return Watson's Canadian passport and never told him why.

“They took it away from me in 2012. So it’s taken four years to get it back and I never did get a single explanation as to why," Watson said. "I don't have any criminal charges against me in Canada so it doesn’t make any sense.”

Canadian officials also never informed the eco-activist about their decision, sending a letter to Watson at a German prison, several months after he was released on bail and living in another country.

Watson later decided he would wait until after the 2015 election to reapply for a Canadian passport, believing he'd have a better chance of success after Harper's government was defeated.

But still, he said he waited a few more months before finally getting the new passport from the newly-elected Trudeau government. He said that government officials told him that his application was sent to Ottawa for review, dragging out the process by about four months, compared to two weeks, the last time he applied for a Canadian passport.

During that time, the top bureaucrat working under Minister John McCallum at the Immigration, Refugees and Citizenship Department was replaced, and May said she called the minister's office directly.

"I don't think there really was a delay," said Elizabeth May in an email to National Observer. "He requested the passport in March. And he got the passport today. I was his guarantor and confirmed that for the consulate processing his application in Paris. I did ask the minister's office in order to make sure there were not delays. Good service, I would say!"

Watson, who was involved with early Greenpeace activist missions more than 40 years ago, has long warned that humans need to do more to protect the oceans to survive as a species. He later split away from Greenpeace in the 1970s and at times has criticized his former colleagues for not doing more to promote conservation.

Some critics, including members of the former Conservative government, accused Watson of being part of a "radical activist group" that engages in "reckless" behaviour with no regard for Canadian and international law. The office of former public safety minister Vic Toews had said in 2012 that anyone who knew where Watson was should contact Interpol immediately.

Watson said he plans to return to the U.S. for a visit in July, but has no immediate plans to return to Canada, since he still doesn't know if police would arrest him and deport him to Japan. But he said the outstanding arrest warrant hasn't stopped Sea Shepherd's operations.

“We have nine ships and I can coordinate them from anywhere," Watson said. The captains and crews run them right now. There’s 125 volunteers on those ships, working in different places around the world and they’re a success story.”

Donald Trump to celebrities threatening to immigrate to Canada: Go

Fact checking is hard work for some journalists.
- He lost his passport because he skipped bail as a fugitive on the run.
- It took ~90 days after requesting it from the Canadian government... the same length of time all us peasants have to wait
- He was arrested for his Costa Rica warrant, not Japan
- He's wanted in Costa Rica for attempted murder after ramming and attempting to sink a much small fishing vessel
- He's wanted in Japan for piracy and assault -- 2 charges that aren't as unbelievable as this article would want readers to believe considering US 9th Circuit Court have labelled Sea Shepherd pirates and Bethune was convicted of assault.

Watson has very real legal issues across multiple countries at this point due to his penchant for violence and racketeering. Indeed he just settled a racketeering case with his own donors. After paying Bethune $500k and Ady Gil $1.5mil for the destruction of their ship and refusal to abide by contract terms.
He's paid Japanese whaling company ICR $2mil after violating the aforementioned 9th Circuit Court's injunction. And will likely pay more before that trial is over. He narrowly escaped another costly lawsuit with Fish and Fish in UK after courts ruled on a technicality that it wasn't the right venue.

And as this article alludes to, but conveniently skips, he's a fugitive on the run from several Democratic governments for his violence acts. It's not surprising that a few Colonialist governments, like France, are willing to excuse his deplorable behavior since it's a white man hurting Asians and Latinos over "cute" "majestic" non-endangered animals. The French, and other certain corners of white extremists, have long considered animals more important than colored humans

@kujirakia - you neglect to mention that Japan slaughters whales in an INTERNATIONAL WHALE SANCTUARY, their entire 'scientific research' excuse for the annual massacre has been proven to be nonsense and despite losing the case and being ordered to cease by the International Court, Japan gives the world the finger while carrying on. Japan used over 25 million dollars donated by other countries to help them after the Tsunami to upgrade their fleet of whaling ships and continues the most atrocious, violent large-scale murder of dolphins annually. It is indefensible. Without Sea Shepherd bringing attention to these CRIMES and standing up for other species, there would be large scale whaling of these intelligent, sentient species. Our government would rather ignore this and the radiation flooding the ocean in favour of yet another Trade Deal for the 1%.

- If you think the Red Cross

- If you think the Red Cross gave $25mil to ICJ/KSK or any other whaling org, you're a retard. Japanese government had a stimulus bill -- normal for any 1st world country after a natural disaster. Included in that was some money, not $25mil, for whaling ships based out of the impact zone. Japanese taxes, not donations. And legitimately spent on entities and job stability.
- Sanctuary doesnt apply to Article VIII, take it up with ICJ
- Japan fully complied with ICJ ruling which encouraged them to start a new program with their criticisms in mind. That's exactly happened. If you had read the ruling you'd know ICJ said Lethal Research is "necessary"

Finally, it's very defensible. All I need to do is point out that MINKES WHALES ARE NOT ENDANGERED. Ergo sustainable hunting is perfectly feasible.
Read the ICJ ruling for yourself. Read 9th Circuit Court rulings for yourself. The Law is firmly on Japan's side.

The only people that have

The only people that have donated to Japanese whaling are Sea Shepherd donors.
Thanks for that settlement, looking forward to continuing this lawsuit and getting more out of you. Maybe we can go after Animal Planet for profiting off illegal activity as well.

While kujirakira accuses the author of failing to do fact checking, his own fact checking is highly selective and betrays its own biases. While not going into all of them, I would say that all his comments can be questioned because of his efforts to play the race card. Watson was in trouble with Iceland, Norway, Canada the United States and probably others that are basically not known as being peoples of colour although Canada is considered multicultural. This attempt by kujirakira casts doubt on everything including his motivation for writing his comment.

The warrant from Costa Rica involved a boat that was shark fitting in Guatemalan waters. First, shark fitting is a disgusting and barbaric practice. Frankly boats involved deserve to be sunk. The fact is the population of top predators like sharks are being rapidly diminished largely for the frivolous purpose of shark thinning for people who can afford shark fin soup. The health of the ocean echo system depends on a healthy population of top predators although they may die from pollution without further action by all human societies.

It is clear that kujirakira is one of those people who believes that somehow God gave humanity the right to destroy all life except humanity. These people will be the ones responsible for the destruction of the planet Earth with respect to human existence

"I would say that all his

Sorry you don't like being called a racist. Maybe you should stop being a racist if you want us to stop pointing out that this entire issue boils down to bigotry and hate.

As for my "selective" facts... laughable. Sorry that reality has a Sustainable Hunting bias.

Shark finning has reduced the

Shark finning has reduced the top predators in the ocean ecosystem significantly and if that echo system is destroyed, no matter what culture likes to eat if it can’t get it Italy something else. That would be better than starving.

As for sustainable of fisheries, you have not produced a single iota of evidence to indicate that anything fished is sustainable. It is clear you don’t take into account the pollution in the ocean that is having an effect on all seafood stock. As for you calling me a racist, that is laughable. I condemned the overfishing at Newfoundland as much as any other. I am not so much interested in who does the plundering with respect to renewable resource; I am more interested in the fact that it is happening at all.
It should also be noted that whaling in a whale sanctuary is unacceptable regardless of who does it. And cultural mores are no excuse for invading such a sanctuary
Furthermore I gave examples of how Watson went after a number of societies that you would consider white. Of course that doesn’t matter to you because you’re obsessed in an attempt to introduce racial nonsense into your comments and then slander someone as racist because they point that out.