A carbon tax or cap-and-trade: Feds suggest every province must choose 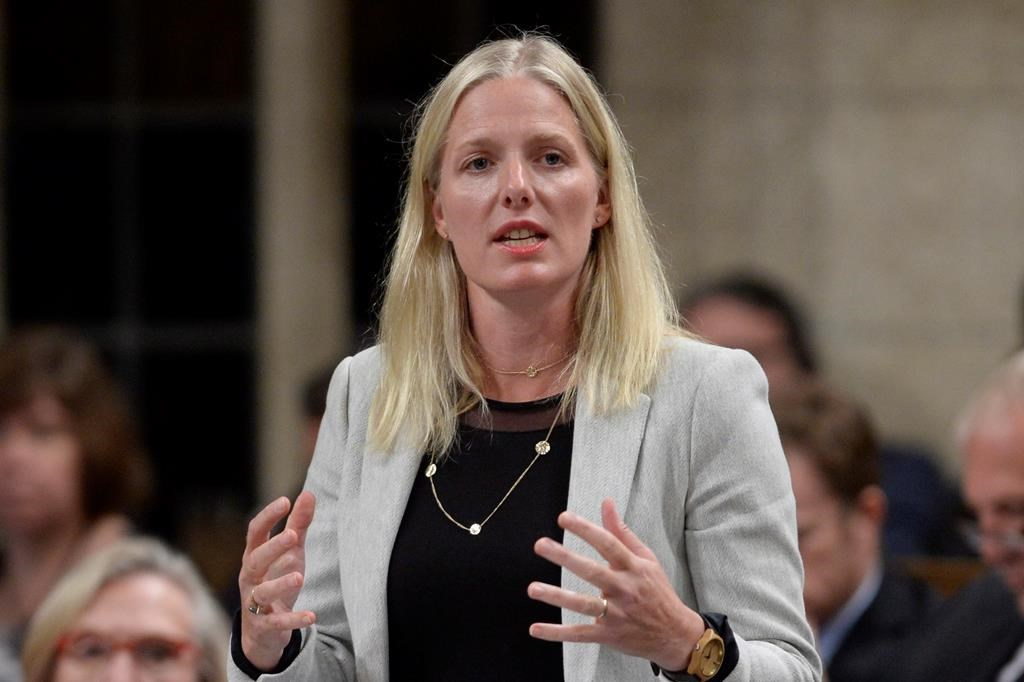 Environment and Climate Change Minister Catherine McKenna has told premiers that the federal government will impose a carbon-pricing scheme if it has to. File photo by Canadian Press.
Previous story
Next story

Every province could soon have either a carbon tax or a cap−and−trade system, Catherine McKenna signalled Wednesday as the environment minister prepares a long−awaited plan that promises to heat up the political climate this fall.

The Liberal government will announce this fall a national policy for carbon pricing — and McKenna indicated that she intends to apply a specific definition for what meets that standard.

"There are two ways you can price carbon," said McKenna, who was in New York for several environmental events at the United Nations. "There’s a cap−and−trade and there is a carbon tax. Eighty per cent of Canadians live in jurisdictions (with one or the other)."

B.C. and Alberta meet her definition with their carbon taxes, as do Ontario and Quebec with their cap−and−trade plans. What doesn’t pass that test? Industrial regulations like the carbon−capture system in Saskatchewan — which is emerging as the federal government’s most vocal adversary on the file.

Asked about the developing dispute, McKenna said every province signed an agreement to work toward the climate targets set by the previous Conservative government — and that includes carbon pricing.

"Regulatory measures are important," she said. "But broad−based carbon pricing is also a critical part of it."

Those comments suggest Ottawa may be preparing some tax within provinces that fail to adopt a minimum carbon price — with all funds collected remaining within that same province.

As for the actual price on carbon, she indicated that the ultimate goal is to go higher than B.C.’s $30 a tonne. The rate is currently fixed in place, instead of being indexed to grow with inflation or the economy. That could change, she suggested.

"It has to increase to be effective," McKenna said, and saluted B.C.’s position that it would agree to increase the tax if the rest of the country followed suit.

"That’s something that we’re working on."

Canada has never had a plan to meet its international promises on climate change, including the current target set by the Harper government: a 30 per cent emissions reduction from 2005 levels by 2030, entrenched in the Paris accord to prevent global temperature increases from reaching catastrophic levels.

The hard part will be designing it.

The executive director of the UN’s environment program said the world could use Canada’s leadership in this area. He said political will is going to determine whether global climate efforts flop, or succeed like the old Montreal Protocol on ozone−depleting substances.

"But Canada is loved by everyone. Canada has no enemies. Everyone is happy to take leadership from Canada.... Canada has a very dynamic prime minister, and a dynamic new government."

That new government risks running into trouble with its provincial counterparts, some of whom are either concerned about details of the national plan or downright hostile to McKenna’s ideas about carbon pricing.

Premier Brad Wall said last weekend that he would have a "big problem" with any universal carbon price in the form of a tax that hits the energy sector, which is already suffering in parts of the country, especially Western Canada.

The last time a prime minister named Trudeau imposed a national plan that adversely affected the region’s oil industry, it fuelled western alienation and wound up devastating the Liberal party in that region for decades.

McKenna was asked about the ill−fated national energy program and how she would deal with the potential fallout this fall.

She said she would consult a broad coalition of Canadians who agree with carbon pricing, and want to help the country and planet benefit from a more sustainable economy: Business groups, unions, indigenous peoples, youth, all other Canadians, and the provinces too.

She stressed that point several times Wednesday: "I’m working with everyone."

She also appeared with Solheim to announce that Canada will host the UN’s World Environment Day next year. That leaves her with yet another decision with regional implications: Which city will host the event?