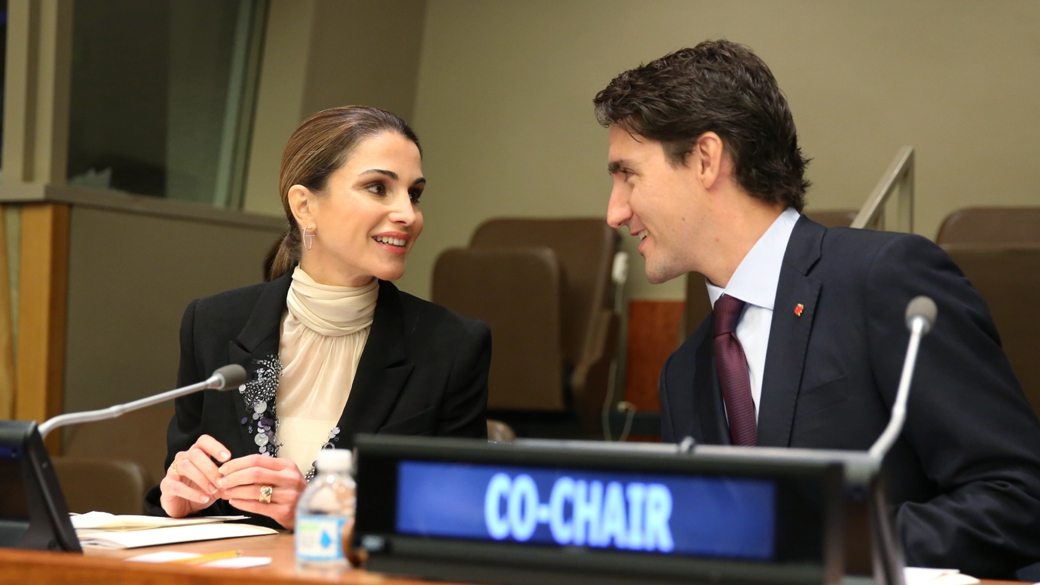 Prime Minister Justin Trudeau co-chairs a roundtable on “International Action and Cooperation on Refugees and Migrants: The Way Ahead” with Her Majesty Queen Rania Al Abdullah in New York on Sept. 19, 2016. Photo from Prime Minister Trudeau's website.
Previous story
Next story

A friendly greeting for Prime Minister Justin Trudeau in New York quickly turned into inconvenient images of a hasty retreat on Tuesday evening after a Montreal woman surprised him with a loaded question.

"Prime Minister, I'm Canadian, I'm from Montreal. It's nice to meet you," said Alex Dahlberg, 22, initiating the exchange as Trudeau walked by, surrounded by a security detail and staffers.

Her greeting instantly drew a warm smile and a handshake from the Canadian politician, who represents a Montreal riding in Canada's Parliament.

But the pleasantries ended after the Montrealer asked Trudeau about a British Columbia oil pipeline project, proposed by Texas-based company, Kinder Morgan.

That's when the prime minister's smile faded and he started to walk away, saying something about wanting a "proper process." Dahlberg politely thanked Trudeau for stopping, saying it was an honour to meet him.

The entire exchange was conveniently captured on video and posted by 350 Action, a U.S. climate change activist group named after what is considered by many scientists to be a desirable target for greenhouse gas concentrations in the atmosphere. The images highlighted the difficult political choice facing Trudeau's government, which is still in its first year in office.

Climate scientists say that human activity has already changed the atmosphere in recent decades and that the planet needs to stop radical expansion of fossil fuels if it wants to stabilize the Earth's ecosystems and avoid more dangerous impacts.

Trudeau has said that government revenues and growth triggered by new pipeline projects could help fund a transition to a greener economy, eventually allowing Canada to achieve its climate change commitments.

But the prime minister has been criticized from all sides — by some, for promoting pipelines, and by others for taking too long to approve them.

Many business leaders and oil companies say that new pipelines are the key to job creation and will help slumping energy companies grow.

"Each day that passes without progress, is another day that our economic future is threatened," says a statement promoted by Canada's largest oil and gas lobby group, the Canadian Association of Petroleum Producers, that has garnered more than 50,000 online supporters. "Now is our chance to show our support for all Canadian energy projects in development. Market access is vital to the wellbeing of our country."

On the other side, many Indigenous leaders and environmentalists have said there are better ways to grow Canada's economy and help it transition to cleaner forms of energy while fighting climate change.

“What the Prime Minister calls a 'proper process' for the Kinder Morgan pipeline has ignored climate change and failed to listen to Indigenous peoples,” said Dahlberg, after her short encounter with Trudeau outside a fundraising event at the Museum of Modern Art. “The pipeline would wreck Canada’s ability to meet climate commitments.”

Dahlberg was among other activists outside the museum, equipped with a banner that urged Trudeau's government to "Respect Indigenous Rights" and "Stop Kinder Morgan." She is also an active member of a campaign, NYU Divest, that is calling on her university to remove more than $139 million in investments from the fossil fuel industry.

Kinder Morgan's Trans Mountain expansion project, a proposal to triple the capacity of an existing pipeline linking Alberta's oilsands producers to a tanker port in metro Vancouver, is one of several proposed pipelines that could spark growth in the oil and gas industry. TransCanada Corp.'s Energy East project, a 4,500 kilometre pipeline between Alberta and New Brunswick, would be the longest project of its kind, if it's built. And Enbridge Inc.'s Line 3 replacement project is considered to be the largest project in that company's history.

The Enbridge and Kinder Morgan projects have both received a green light following federal reviews by Canada's National Energy Board, and are now being considered by Trudeau's cabinet, which is expected to announce its decisions before the end of 2016. The Energy East project review just got underway, but the process was suspended following a rowdy protest at hearings in Montreal, followed by the resignation of a three-member panel due to accusations of bias that were prompted by recent reports published by National Observer.

Editor's Note: This story was updated at 11:45 a.m. ET with additional background information.