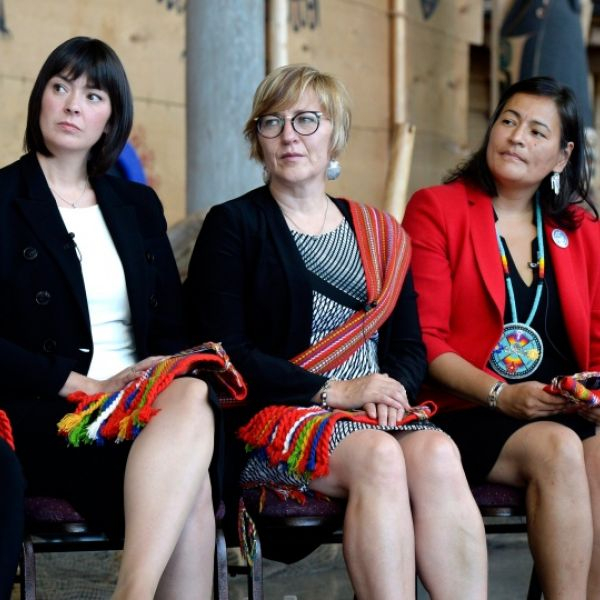 Scan almost any news article about me and in the anonymous comments section you will likely find a handful of enraged citizens who feel that I should not be in my position because I am not an Inuk.

My experience as a territorial cabinet minister working for decades alongside Inuit leaders like Paul Quassa and John Amagoalik for the establishment of Nunavut and the settlement of the Inuit land claim, and my experience living with and hunting with Inuit on the land, is considered by some as irrelevant to my qualifications to advocate for Nunavut. They cannot look past the colour of my skin.

So as a non-Inuk representing the 85 per cent of the population of Nunavut who are Inuit in the Senate of Canada, I am very wary of using the term 'racism' to criticize any actions or beliefs.

But I believe that unfortunately racism is exactly what is motivating Pauktuutit, Canada's national Inuit women's association, and the Qulliit Nunavut Status of Women Council to condemn the recently-announced appointment of Qajaq Robinson as a commissioner to the National Inquiry into Missing and Murdered Indigenous Women and Girls.

I have known Qajaq Robinson since she was a young girl. She was born of Caucasian parents — her dad was a respected teacher and principal at the local school — and she was raised in the small and isolated community of Igloolik, growing up as an equal with Inuit playmates speaking fluent Inuktitut. Her husband, Kipanik Eegeesiak, is an RCMP officer in the Parliamentary security detail.

She is one of few Nunavut high school graduates to have earned a law degree and she went on to gain valuable experience as a respected Crown prosecutor in Nunavut. She was then invited to join the respected major Canadian law firm, Border Ladner Gervais, where she has worked capably on Indigenous and northern files.

She is the vice president of Tungasuvvingat Inuit, an organization that provides vital support and services to the Inuit of Ottawa, the second-largest Inuit community in Canada. In that capacity, she travelled 18,000 kilometres over nine days in March to help facilitate submissions to the government by Inuit Tapiriit Kanatami and Tungasuvvingat Inuit when the inquiry was being established.

Her deep understanding of the Inuit culture — evidenced by her fluency in Inuktitut and acceptance by the Inuit community from a young age — will, I am sure, prove to be invaluable to the inquiry’s work.

It is sad to see organizations representing Inuit women condemn Qajaq Robinson solely based on her race, minimizing her stellar qualifications and achievements. Some have even said that they cannot trust the work of the inquiry — which has been called for so loudly by Inuit women's organizations — unless Ms. Robinson is removed as a commissioner.

Racism is the belief that race is the primary determinant of human traits and capacities, and that racial differences produce an inherent superiority of a particular race. I am dismayed to see the condemnation of someone who has worked on behalf of Inuit, who has had practical experience working with the justice system in the north and who will be able to communicate with and understand Inuit witnesses who come before the inquiry in their own language. It is of course very important that the commissioners understand the Inuit culture but the Inuktitut language is the carrier of the Inuit culture, and it was growing up in an isolated northern community speaking Inuktitut on the school playground where Qajaq Robinson learned to speak Inuktitut.

To overlook her intimate knowledge of Inuit, her experience with the justice system and her knowledge of the law is to say that race — bloodline — is the primary requirement for a competent commissioner. That is racist and deplorable.

Instead of superficially focusing on the colour of her skin, we should congratulate and thank Qajaq Robinson for her willingness to set aside her legal career and the obligations of a young family and wish her well on the physically and emotionally grueling task that lies ahead.

Senator Dennis Patterson served as premier of the Northwest Territories between 1987 and 1991, and he helped to establish Nunavut as Canada’s newest territory. He represents Nunavut in the Senate and is deputy chair of the Senate Committee on Aboriginal Peoples.

-Correction: An earlier version of this column incorrectly stated that Qajaq Robinson was nominated to sit on the Commission by Inuit Tapiriit Kanatami.

Dennis Patterson misses the point totally and his misdirection is cemented in the fact that he thinks and says that the Inuit don't want Ms Robinson's representing them because she's white, in other words he's saying it's because the Inuit are racist. Nothing could be further from the Truth. Too bad it's Dennis Patterson's voice that gets bandied about and gets his views disseminated and read, and becomes influential in a colonialist culture solidifying values and negative ideas about Peoples with Colour.