By Elizabeth McSheffrey | News, Energy | September 29th 2016
#517 of 2003 articles from the Special Report: Reports from the Race to a Safer World 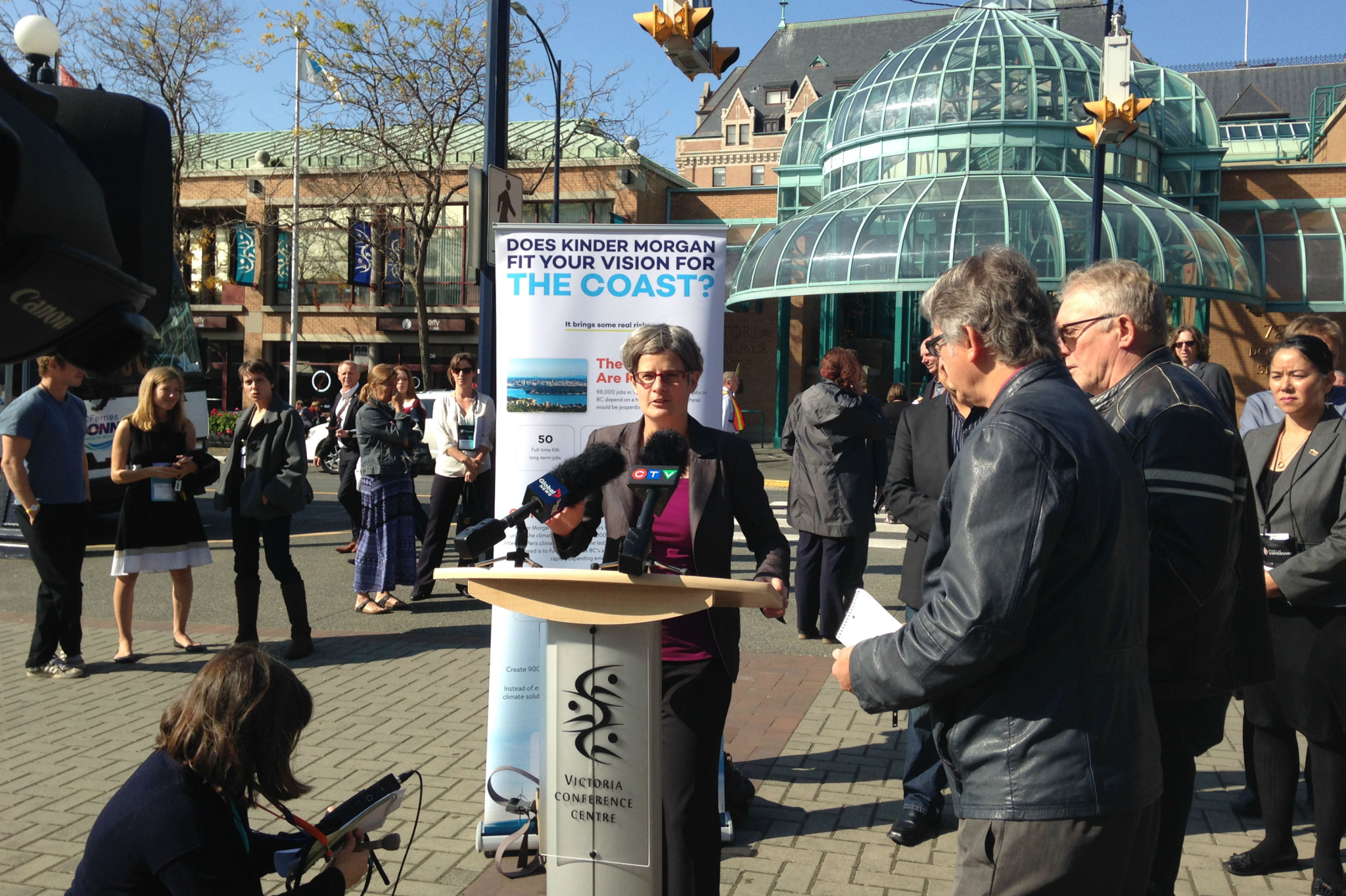 In a last-minute move of complete "exasperation," nine municipal leaders in B.C. rallied together on Thursday, asking the federal government not to approve a major oilsands pipeline expansion, citing concerns about poor review process and risk of a catastrophic oil spill along the Pacific coast.

Mayors from Vancouver, Victoria, Bowen Island, Sooke, Squamish, North Vancouver, Burnaby, Richmond, and New Westminster joined Tslartlip First Nation Chief Don Tom at the Union of BC Municipalities Convention in Victoria, where they implored Prime Minister Justin Trudeau to reject the controversial Kinder Morgan Trans Mountain expansion on Dec. 19. Since they first signed a declaration of opposition to the project in March 2015, they say none of their concerns — including lack of cross-examination during National Energy Board hearings for the pipeline, and the inability of most stakeholders to participate as interveners — have been addressed.

"On the eve of the closing of the ministerial panel, none of the process flaws identified have been addressed through that panel,” Victoria Mayor Lisa Helps told National Observer. “I guess we’re now kind of double-disappointed that regular British Columbians haven’t had ample opportunity to give input into this process and that’s not good governance.”

The entire affair has left the mayors in a state of exasperation, said Helps, who said the pipeline is simply "not in the national interest."

Calls for a pipeline review overhaul

The Trans Mountain expansion is a proposal from the Texas-based oil giant, Kinder Morgan, to add 987 kilometres of brand new pipeline to an existing system that transports 300,000 barrels per day of crude oil and petroleum from Alberta to terminals and refineries in Vancouver and Washington. Upon completion, it would triple the capacity of the system to 890,000 barrels per day, cut through unceded Indigenous territories, and increase tanker traffic in local waters by as much as 600 per cent.

The project's supporters argue that it will breathe new life into struggling provincial economies, create much-needed construction jobs, and bring sustainably-extracted Canadian resources to new markets overseas. Kinder Morgan also says it can operate the pipeline safely through "robust" emergency response plans that are constantly under review for improvement, and that it has signed 20 "mutual benefit agreements" with Indigenous communities along the route of its the project corridor.

“We understand there are a variety of opinions about our Project," Ali Hounsell, spokesperson for Trans Mountain, told National Observer in an email. "These Mayors have expressed their opposition a number of times and while we respect their right to their opinions, it's important to remember they don't necessarily represent the majority of communities.

"We continue to be open to conversations with these Mayors, to understand their concerns and points of view. While we appreciate we may never find agreement on every issue or change anyone's opinion, it is this approach that has made our Project stronger and in consideration of many and varied interests."

Hounsell also pointed out that at the convention in Victoria, a group of another B.C. mayors spoke about the importance of "getting our resources to market."

At least 21 municipalities and 17 First Nations however, have opposed the pipeline in the years since its initial proposal. Beyond concerns related to environmental health, national climate targets and First Nations consultation, they have expressed concerns with the "flawed" National Energy Board evaluation. The NEB did not allow cross-examination during hearings, public attendance was not permitted, significant scientific studies were ruled out as evidence, and a majority of concerned residents were denied intervener status.

After the conclusion of the NEB hearings, the mayors placed their faith in a new ministerial panel appointed by the Trudeau government to hear public input on the project. The ministerial panel did little to satisfy critics who allege one of the panelists had a conflict of interest and note it did not formally record its meetings with stakeholders and will rely on hand-written notes to file its report to the federal government in November.

In a joint statement released on Thursday, the mayors called for a complete overhaul of the entire process:

"With the recent suspension of the NEB hearings on the Energy East pipeline due to conflict of interest issues, the mayors are pointing out that Kinder Morgan was reviewed under the same NEB leadership, and believe that both pipeline projects should be treated in the same way. Neither project can go forward until the NEB is overhauled, and a fair and rigorous public hearing process is in place."

Public feedback on the Kinder Morgan expansion will be collected online until Sept. 30, and Victoria Mayor Lisa Helps said she hopes the Trudeau government will choose green jobs, emissions reductions, and environmental safety for all coastal residents.

“If the government approves the pipeline, it’s not that I’ll feel that my voice wasn’t listened to, it’s that I’ll feel like they’re not taking a long-term view for Canada and the planet," she explained. “I think the Trudeau government has a real opportunity to make this decision in the best interests of the country, to turn down the pipeline in the best interest of the country, and to really hold that up as opportunity for them to take leadership."

Elizabeth May chimes in on panel

Green Party leader Elizabeth May submitted her own feedback to the ministerial panel on Thursday, asking the federal government to reject the project. She was the only member of Parliament to appear as an intervener before the NEB during hearings in January, and at the time, begged the panelists to let the project "die here."

“Trans Mountain has not been reviewed by any regulatory body or agency to assess if it is in Canada’s economic interest. In response to a challenge by UNIFOR, the NEB refused to consider the economy, job creation or economic benefit stating it was beyond the scope of the hearing,” she said in a news release.

“On top of this, Liberal campaign promises included respectful nation to nation relationships with First Nations; evidence-based decision-making; science-based decision-making; and action to reduce greenhouse gases. Should the Trans Mountain pipeline be approved, the Trudeau administration will violate all four of these promises. Transporting diluted bitumen to the coast for tanker transport to offshore refineries is simply not worth the environmental risk for an unproven claim of economic benefits. Canadians expect this government to fix our environmental review process and say no to dilbit pipelines and tankers.”

All BC coastal mayors please

All BC coastal mayors please note an ALTERNATIVE exists which involves NO DILBIT , a line to Prince Rupert from Fort McMurray with First Nations involvement .A DEDICATED ENERGY CORRIDOR safer than the Kinder Morgan proposed corridor through the Alberta and BC Forests .