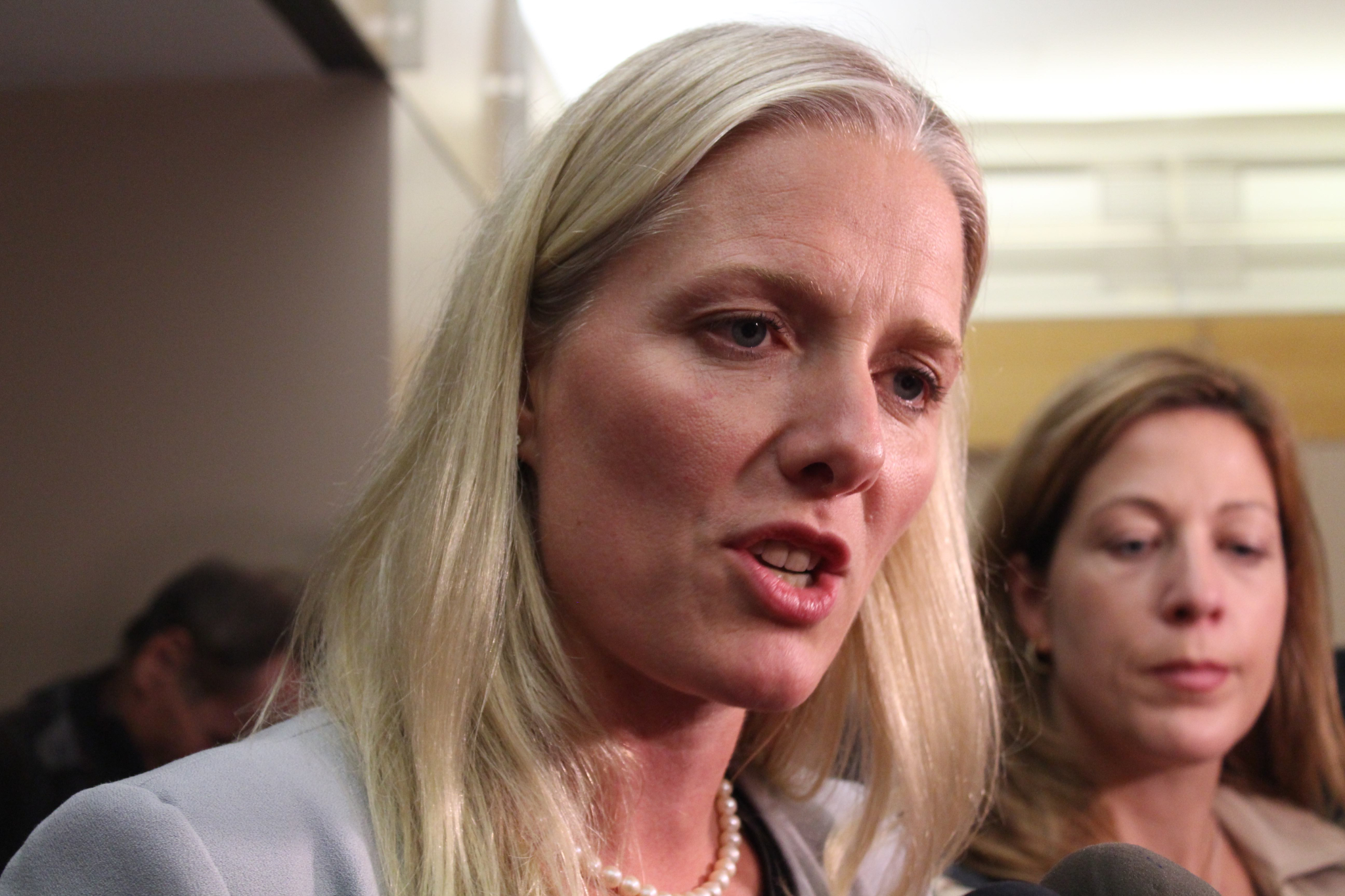 Canadian Environment and Climate Change Minister Catherine McKenna praised her provincial colleagues for making "amazing" progress on discussions to tackle global warming on Monday, after her government's proposal to make polluters pay drove a few of them out of the room.

Several premiers were stunned as Prime Minister Justin Trudeau told the House of Commons about his plan to put a national price on the dumping of heat-trapping carbon emissions into the atmosphere. The proposal has been in the works for months and was part of a promise made by federal Liberals in last fall's election campaign, but some premiers, including Saskatchewan's Brad Wall have been actively trying to stop it, warning that it would harm energy companies that have been hammered in recent years by plummeting global oil prices.

After getting backing from key allies in Quebec and Ontario, McKenna said that Canada's approach to climate change was taking a dramatic turn.

“Carbon pricing is a tough discussion, no doubt, but the thing is we need to move forward," McKenna told reporters after a day of meetings with her provincial counterparts at a downtown Montreal hotel. "But I think, overall, this is amazing. We finally, after a decade of inaction, we are actually taking action to tackle climate change. It's going to position us all for (strengthening) our economy.”

According to the new federal policy, all Canadian jurisdictions must adopt a carbon pricing scheme by 2018 with a minimum price of $10 per tonne. The price must rise to reach $50 per tonne by 2022.

If provincial and territorial governments are unable to meet these requirements either through a direct price on carbon pollution or a cap-and-trade system, the federal government will impose its own system.

It’s time to act - watch my speech in the House introducing our plan for pricing carbon pollution.https://t.co/10GY169zca

Ontario and Quebec Environment Ministers Glen Murray and David Heurtel left the meeting satisfied that McKenna's proposal would respect their own plans for cap-and-trade pricing systems - a market-based solution that allows companies to buy and sell credits in a stock exchange-type system to reduce emissions.

Quebec's Heurtel said the ministers also reached key agreements in areas such as support for clean technology and adaptation to the impacts of climate change.

"There's a lot of positives today and there's a lot of work that was done today — good work that was accomplished today and there's still difficult steps to be taken, but I think we're moving forward on the issue of carbon pricing," said Heurtel. "As some ministers put it, it's difficult because it's difficult, and that's what needs to be acknowledged, but we're moving forward on the issue.

There was a lot of progress today, says @Heurtel #climatechange pic.twitter.com/m7q4KQyrvP

But not all provinces were satisfied, with environment ministers from Nova Scotia, Saskatchewan and Newfoundland and Labrador opting to leave the meeting early. "It was a decision that was made by the federal government and we feel it was a betrayal of the collaboration that was indicated all along," Saskatchewan Minister of Environment Scott Moe told reporters after walking out. "We're struggling a little bit to understand where this message came from today and what's going to happen moving forward."

"All of a sudden we have a top down policy that runs counter to that (collaboration)," agreed Newfoundland and Labrador Environment Minister Perry Trimper, who left early at the request of his premier.

The environment ministers from Nova Scotia and Manitoba said they would return to their respective provinces to discuss the matter further with their colleagues.

"We're struggling a little bit to understand where this message came from today and what's going to happen moving forward," said Nova Scotia Environment Minister Margaret Miller after she walked out on the meeting.

The federal government will now set a benchmark for pricing carbon emissions at a level that will help it meet emissions targets of 17 per cent reduction from 2005 levels by 2020 and 30 per cent by 2030. The move provides greater certainty and predictability for businesses while reducing ocean and air pollution, according to a statement released by McKenna's office.

Although revenues from the new carbon pricing plan will remain with the provinces and territories of origin for use at their discretion, Saskatchewan Premier Brad Wall said the Montreal meeting with McKenna was "not worth the CO2 emissions it took for environment ministers to get there." In a Facebook post condemning the decision, he said Canada's climate action focus should be developing local emissions solutions in areas like power production and transportation, rather than burdening struggling economies with new taxes.

"The level of disrespect shown by the Prime Minister and his government today is stunning," he wrote. "This is a betrayal of the statements made by the Prime Minister in Vancouver this March. And this new tax will damage our economy.... In the coming weeks, Saskatchewan will investigate all options to mitigate the impact of one of the largest national tax increases in Canadian history."

Alberta sets its own conditions

But Murray, the Ontario environment minister, said Wall had a different "world view" than most of the rest of the country.

“There are lots of ways to solve problems in our federation if we stay in the room and we talk and we listen to each other and there was more of that today than there was the other," Murray said. "There's a responsibility for all ministers to work together... I hope that my colleagues from Saskatchewan and others start to engage. This is a global challenge. This is a responsibility greater than national or regional politics."

Wall is considered Canada's most vocal political opponent to a national carbon tax, but Alberta Premier Rachel Notley joined him in opposing the new federal mandate. In a statement released Monday, she said she supports the idea in theory, but will not back any climate action from Ottawa unless the federal government makes progress on new oil pipelines to Canada's coast.

Notley maintained that Trudeau has a responsibility to "act on an issue" that has led to record unemployment in Alberta.

“With regard to the federal government's proposals today, Alberta will not be supporting this proposal absent serious concurrent progress on energy infrastructure, to ensure we have the economic means to fund these policies," she explained.

“It is time for the Government of Canada to act on this issue. Albertans have contributed very generously for many years to national initiatives designed to help other regions address economic challenges. What we are asking for now is that our landlock be broken, in one direction or another, so that we can get back on our feet.”

Notley's environment minister, Shannon Phillips, stayed until the end of the meeting and echoed Notley's statement, but noted that Alberta supports carbon pricing if the revenues remain within the province.

“We don't believe the two — economic growth and a price on carbon are at odds with one another, in fact we think these are complementary policies, provided that they have the right support from the federal government," Phillips said, adding that putting a price on carbon was the best climate change approach for Alberta's industry.

In the House of Commons on Monday Trudeau said that both the federal Conservative and New Democrat parties' lack of faith in either the carbon pricing plan or his other environmental policies is misplaced. Neither party, he told MPs, seems to understand that strong economies and environmental protection go hand in hand.

"The Liberal government has it right."

Outside of the Montreal meeting, activists from several environmental groups staged a demonstration saying that they were opposed to any new pipelines and that the governments would need to do a lot more than carbon pricing to solve the threat of climate change.

"We are united against all pipelines. We will not accept (Kinder Morgan's) Trans Mountain (expansion pipeline project), we will not accept (TransCanada Corp.'s) Energy East pipeline, we will stop it any way we have to," said Carole Dupuis, the coordinator of an anti fossil fuels group in Quebec called Regroupement vigilance hydrocarbures Québec. "Governments, you cannot look the other way. If you want to save the climate, you (must) stop those projects.”

Last month, McKenna hinted that that the federal government would be willing to impose a national carbon price if it had to, but did not give a specific timeline. Provinces and territories will have federal support in the development of their carbon schemes, she said, but those opting for a cap-and-trade system will need to reduce the number of greenhouse gas emission permits they make available to businesses.

The number of available pollution permits should decrease every year based on both emission cuts through to 2022, and a 2030 reductions target equal or greater to Canada’s, said a federal statement.

“Pricing pollution is one of the most efficient ways to reduce greenhouse gas emissions and to stimulate innovation," McKenna explained. "Already 80 per cent of Canadians live in a province where there is pollution pricing. We want to continue this trend and cover the final 20 per cent."

The announcement came as Prime Minister Justin Trudeau kicked off the debate in the House of Commons over whether Canada should ratify the Paris accord on climate change, which aims to keep planetary warming this century below 2°C, and ideally, 1.5 °C. Sixty-two parties have ratified it so far, accounting for roughly 52 per cent of global greenhouse gas emissions.

The decision has been met with mixed reviews by environmentalists across the country. Green Party leader Elizabeth May tweeted that the carbon pricing plan is "too low to be taken seriously," and in a statement, said she was perplexed as to why the Trudeau government refuses to update its climate targets to meet the Paris accord on climate change.

“If we persist with Harper-era greenhouse gas (GHG) targets that are among the weakest in the industrialized world, we will fail to ensure Canada does its part in holding the global average temperature increase to no more than 1.5 degrees Celsius," she said. "This is not a theory – it’s basic math."

The David Suzuki Foundation however, applauded the Trudeau government for taking steps towards a national climate action plan, and called for additional policies to support the carbon pricing announcement.

"A national carbon price is an essential foundation for an effective Canadian climate action strategy, but additional policies are needed to uphold Canada's international climate commitments," said Ian Bruce, director of science and policy for the David Suzuki Foundation.

"A carbon price provides a clear market signal that makes clean technology more affordable and polluting technologies more expensive, but to accelerate the shift to a clean economy, it is critical to direct some of the money raised into projects that will further drive down emissions and lay the foundation for a clean growth century."

“Today’s announcement gives investors everywhere in Canada a clear signal: the cost of carbon pollution is going up and there is a market for climate solutions. That predictability will accelerate Canada’s clean energy transition, drive innovation and help us succeed in a global clean energy market that’s seeing record growth."

According to a survey by Nanos Research, commissioned by Clean Energy Canada, 66 per cent of Canadians agree or somewhat agree that it is more important to have a plan to meet Canada’s climate change targets than to have all provincial and territorial premiers agree with that plan.

While activists say they are planning an act of civil disobedience to send governments a message in Ottawa later this month, Prime Minister Trudeau and the premiers are expected to discuss the path foward during a special meeting this December, also in the nation's capital.

While the federal NDP push

While the federal NDP push for more envoronmental protection, those running Alberta attempt to extort pipeline approvals before cooperating. Strange that Notley and company were environment first until they won the election. Lies, upon lies, upon lies.