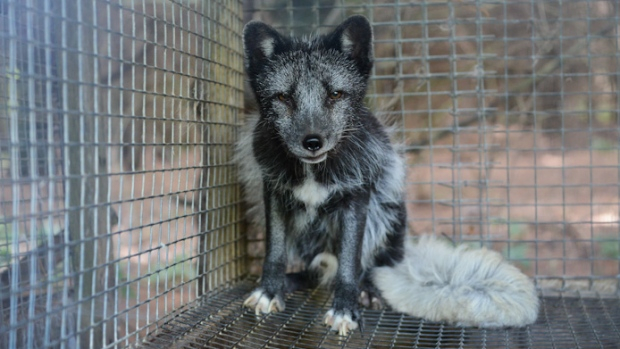 After receiving a cruelty complaint about a farm south of Montreal, the SPCA obtained a warrant and investigated last May. It found thousands of animals living in deplorable conditions. Photo courtesy of Jo-Anne McArthur, SPCA.
Previous story
Next story

A Liberal backbencher’s bill to modernize Canada’s antiquated animal cruelty laws has been mauled, with Prime Minister Justin Trudeau and his cabinet ministers joining forces with the Conservatives to vote it down.

Toronto MP Nathaniel Erskine−Smith’s private member’s bill was shot down Wednesday at second reading on a vote of 198−84.

But Erskine−Smith says he’s confident the government will now initiate its own reform of animal welfare legislation.

His bill would have banned the importation of shark fins and cat and dog fur, made any sexual contact with an animal a crime and made it a crime to profit from or breed animals for the purpose of fighting.

It would also have made the "brutal and vicious" killing of an animal a new offence and would have changed the standard for animal cruelty from willful neglect to "gross negligence."

During previous debate on the bill, the government argued that it could have inadvertently rendered illegal otherwise lawful activities such as hunting, trapping, fishing, ranching and medical research.

Justice Minister Jody Wilson−Raybould said Wednesday that the government supports "the premise" of Erskine−Smith’s bill but that more consultations are needed.

Reforms to the animal cruelty provisions will be addressed in the coming review of the Criminal Code, she added.

"I am, as minister, committed to further engaging in discussions and having the necessary consultations on the animal cruelty provisions in the Criminal Code, engaging on both sides of the debate with rural Canada, with farmers, as an example."

Most Liberals voted against Erskine−Smith’s bill, including Trudeau and all his ministers. New Democrats supported it.

The bill specifically excluded hunting, ranching, etc, so the government's excuse is nonsense. I, for one, believe that ALL animals need protection from humans and that ranching, hunting, etc, need serious reforms. The cruelty inflicted is inexcusable and indefensible. Fur farms and breeders of all kinds need strict oversight but are rarely even inspected. So-called "religious" slaughter, where creatures are hung by their feet, throats slit, and left screaming in agony to bleed to death (1/2 hour or more for cattle) while prayers are recited is contrary to existing against suffering, yet this is allowed. In France, tens of thousands of goats have their throats slit for Eid and are tossed onto the streets to rot. Demand is increasing and so is the suffering.

A great deal of vivisection is unnecessary and there are more advanced, faster and reliable methods for testing. Instead of passing a modern framework and making changes to improve it, they have left us with nothing. Interesting that it is exactly the opposite of the excuses used to pass C-51, replace the Navigable Waters Act, etc, yet we are still waiting for amendments.