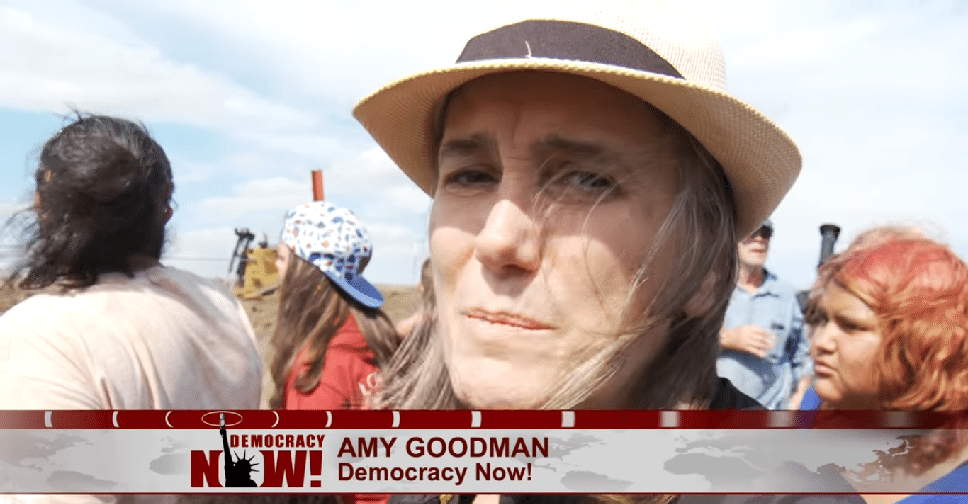 Fear and loathing in North Dakota

On Monday October 17, award-winning journalist Amy Goodman of DemocracyNow! will turn herself in to North Dakota law enforcement who have issued a warrant for her arrest. Goodman's arraignment will no doubt be followed by a huge press scrum as well as demonstrations protesting North Dakota's assault on freedom of the press.

Goodman is charged with criminal trespass for filming an attack on Indigenous-led pipeline protesters — in other words, for doing her job as a journalist. Without her, the story would have been invisible to anyone who wasn't there to witness the ugliness and conflict in person, as corporate power tried to crush a popular movement.

The 59-year-old executive producer and host of DemocracyNow! produced a televised report showing how private security guards hired by Dakota Pipeline Access Company pepper-sprayed and set attack dogs on pipeline demonstrators, even capturing one of the hound's bloodied snouts, still dripping with blood from a Indigenous protester's arm. Her shocking report went viral. You can watch it here.

Did I hear that right?

Private security guards hired by a pipeline company set dogs on Indigenous protesters. We wouldn't have seen the aggression these 'guards' unleashed if Goodman hadn't been right there.

Goodman's report on the confrontation between the pipeline security thugs and demonstrators went viral, with more than 14 million people watching it on Facebook. That's what riled up North Dakota enough, in the nightmarish words of Trump's mob, to 'lock her up.'

It's another shameful chapter in the North American pipeline wars. You know, these battles pit ordinary people against what Naomi Klein once described to me during an interview as 'the richest industry on earth.' The arrest of Goodman will not go down as a footnote.

This is a blatant act of retribution against a popular, well-respected television journalist who has built her own independent news network that has been reporting the news through a progressive lens since 1996. And it's a blatant act of intimidation towards journalists in general.

It's alarming because you and I need MORE journalists like Amy Goodman. We need journalists to be brave, reporters who are willing to depart from pack journalism, leave behind the scrums that huddle around the scandals and the celebrities, and get out on the ground so that you and I know what is happening in the world around us. It alarms me because I'm a journalist and I believe in on-the-ground reporting for stories that would otherwise be invisible.

The Committee to Protect Journalists has said that the warrant is "a transparent attempt to intimidate reporters from covering protests of significant public interest." Steve Andrist, executive director of the North Dakota Newspaper Association, told The Bismarck Tribune, "It’s regrettable that authorities chose to charge a reporter who was just doing her job."

"Regrettable" doesn't begin to cover it. This isn't just outrageous. It's dangerous. It's an attack on your right to know and understand the world. And it must be protested loudly by all of us, demanding North Dakota drop all charges against Amy Goodman.

Who is Amy Goodman?

Those are the words I think of first when I think of Goodman, who I had the pleasure of meeting last year in New York City.

I'm talking about that pleasure you get from meeting someone you've always admired.

That's what I felt when I got to stand with Goodman and she raised her hand in a peace symbol as she smiled and posed as we were photographed together. Goodman's heroic. She's understated and humble.

She's written six books, received honorary Doctor of Letters degree from two universities for her journalism and innumerable awards. The list is too long to mention here, but includes prestigious honours such as the Right Livelihood Award, the Thomas Merton Award and, most recently, the 2014 I.F. Stone Lifetime Achievement Award from the Neiman Foundation for Journalism at Harvard along with Laura Poitras.

The Dakota pipeline story is just the kind of story DemocracyNow! is famous for covering: a disenfranchised group, fighting for its rights.

DemocracyNow! does a lot of stories like this, including this one about whether the rise of Donald Trump was a "result of America declaring war on the institutions that make democracy possible." The show is broadcast on 650 stations around the world.

Matt Taibbi over at Rolling Stone is furious about what's happening to Goodman, who he also admires. As he wrote this morning, Goodman's report probably caused the Obama administration to instruct the Army Corps of Engineers to tell the company to "voluntarily pause all construction activity," which was a victory for the Standing Rock Sioux, whose territory the pipeline would penetrate.

But North Dakota Prosecutor Ladd Erickson argued publicly that Goodman was not acting as a journalist at the time of the protests, Taibii reports. "She's a protester, basically," Erickson said. "Everything she reported on was from the position of justifying the protest actions."

I'd like to be able to quote about half of Taibii's story and what he has to say about Goodman's independence, because it's all so important and so well written. I urge you to read the whole piece yourself here.

"The whole point of fighting to be independent for your whole career, and building your own news network instead of working at someone else's existing, corporate-funded one, is so that you can cover something like the Dakota Pipeline story whenever you feel like it," he says at one point and then adds:

"So not only was Amy Goodman doing journalism when she was at those protests, the only kind of journalist who would even be there almost by definition would have to be one like Amy Goodman."

And that's why independent journalism is so important. Information is power. It allows citizens in democratic nations to engage in an intelligent and effective manner.

But sometimes the truth has so much value that the truly powerful just don't want us to know.