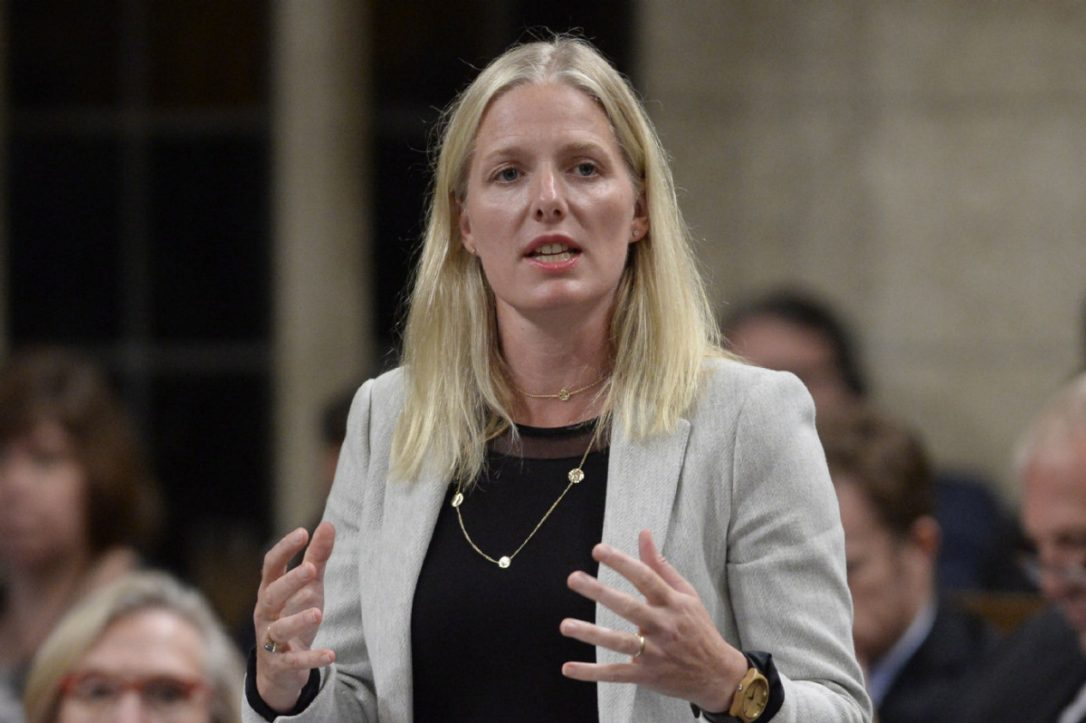 Environment and Climate Change Minister Catherine McKenna told a Toronto business crowd on Friday that the 21st century will be the century of clean growth. File photo by the Canadian Press.
Previous story
Next story

Environment and Climate Change Minister Catherine McKenna is steamrolling ahead with growing measures to move Canada toward cleaner fuels and energy, even as the neighbouring United States may be headed in the opposite direction.

On Friday, McKenna added another piece to the puzzle, announcing a plan to develop a stronger clean fuel standard to reduce annual greenhouse gas emissions by 30 million tonnes by 2030. The standard would apply to transportation and heating fuels and be the equivalent of removing the annual pollution of about seven million cars from the roads, McKenna said.

“We stand at the dawn of the clean growth century. It begins with the choices we make today,” McKenna said to a lunchtime Toronto business crowd.

With many global observers confused about the approach of the incoming regime of U.S. President-elect Donald Trump, McKenna evoked the vision of outgoing U.S. Secretary of State John Kerry to make her point that the planet is moving toward a new clean economy, and that no single country can stop that momentum.

She quoted a statement Kerry made that not only is clean energy the solution for climate change, but it’s “also the greatest market opportunity the world has ever known.”

Trudeau Liberals under pressure from all sides on pipelines

McKenna delivered her speech as the Trudeau government finds itself under intense pressure from environmentalists who want it to reject new pipeline projects to meet climate change goals and instead promote cleaner growth. On the other side, the government is also being pressured by western Canada's energy companies that say new oil pipelines would be critical for the economy. Federal environment officials have estimated that one of the projects that the government is considering approving, Enbridge's Line 3 replacement project, could result in up to 26 million tonnes of annual carbon pollution.

In the meantime, the federal government said it would consult the provinces, territories, and Indigenous leaders to finalize details for the new fuel standard at the next First Ministers meeting in December. After this, it plans to publish a proposal to guide consultations of the clean fuel standard in February 2017.

Other jurisdictions in Canada — Saskatchewan and Ontario, among others — have had renewable fuel requirements for almost a decade, and the existing federal renewable fuels regulations stipulate that gasoline must contain five per cent ethanol with diesel fuel sold in Canada containing two per cent. The average fuel mix in Canadian-sold gasoline is currently seven per cent.

McKenna made the announcement to a crowd of a few hundred at the Toronto Region Board of Trade that included Air Canada's director of environmental affairs Teresa Ehman, vice-president and deputy chief economist with Scotia Bank Brett House, and CEO of clean tech software company ZeroFootprint Ron Dembo.

The clean fuel standard will:

Clean Energy Canada — a Simon Fraser University-affiliated NGO that advocates for the adoption of cleaner sources of fuel — said the new policy would be a significant step toward meeting Canada's climate change goals.

“The federal government has chosen a cost-effective and proven policy tool. British Columbia’s clean and renewable fuel standard has been a quiet success in the province, accounting for a quarter of the cuts to carbon pollution B.C. achieved from 2007 to 2012,” said Merran Smith, the group's executive director, in a statement released following the announcement.

In keeping with its targets from the international Paris agreement on climate change, Canada’s Liberal government has said it intends to reduce Canada’s greenhouse gas emissions by 30 per cent below 2005 levels by 2030. To accomplish that, it has announced a Canada-wide carbon pricing scheme of $10 per tonne to be implemented by the provinces by 2018. That price would rise to $50 per tonne by 2022, and the provinces could decide whether to implement a direct carbon tax or to implement a cap and trade scheme similar to Ontario’s.

News of the fuel standard comes on the heels of an announcement of Canada’s “Mid-Century Long-Term Low-Greenhouse Gas Development Strategy” at international climate change negotiations in Marrakech, Morocco earlier this month. The federal government said it hopes that strategy will help achieve commitments outlined in the Paris Agreement just under one year ago — limiting average global temperature rise to two degrees Celsius this century.

The Trudeau government also signalled that it would use its newly announced infrastructure bank to help finance the integration of Canada’s electricity grid, while investing $21.9-billion in green infrastructure and phasing out subsidies to the fossil fuel sector.

“We stand at the dawn of the clean growth century. It begins with the choices we make today."

McKenna also touted her government’s environmental accomplishments both at home and abroad — its role in negotiating the Paris Agreement, as well as an international agreement to reduce hydrofluorocarbons used in household appliances, and the North American Leaders Summit’s commitment to reduce methane emissions from the oil and gas sector by up to 45 per cent by 2025.

She told the crowd that the the twenty-first century will be the clean growth century, noting that almost $750-billion was invested globally in renewable power last year — nearly double the number invested in fossil fuel development.

Much of the business community is also on board with the transition to a clean economy. Over 60 executives signed a letter this week urging the Prime Minister to chug ahead with collective action on climate change, including putting a national price on carbon.

The Trudeau government's phase out of coal-fired power plants nationwide by 2030 — around 10 years ahead of the government’s previous target — will eliminate around 61 megatonnes of emissions per year and bring Canada’s total electricity generation derived from renewables and nuclear to nearly 90 per cent.

Alberta had already pledged to phase out coal-fired electricity production by the same date before Ottawa announced its intention to shutter coal plants nationwide. The Alberta government will pay over $1-billion to coal power companies by 2030 to compensate them for shutting down new plants before their original contracts expire in 2061. Government estimates pit the cost of transitioning off coal at up to $25-billion.

But other jurisdictions aren’t as keen to ween themselves off coal-fired electricity as Alberta.

Brad Wall’s government in Saskatchewan intends to produce 50 per cent of its electricity using renewable sources by 2030, but it has said it doesn’t want the federal government meddling in its plan to reduce greenhouse gas emissions.

Saskatchewan’s Environment Minister Scott Moe said earlier this week that his government wants an “equivalency agreement” similar to Nova Scotia’s that allows the Atlantic province to use coal-fired electrical plants beyond the 2030 deadline.

Provinces can choose to either phase-out coal power generation entirely or to use technology to capture the carbon pollution and store it underground. Saskatchewan already has this technology installed at one of its coal plants near Estevan.

But coal isn't the federal government's only concern, and critics have said the government will be hard-pressed to meet its emissions reduction targets if it keeps approving new fossil fuel projects. The federal government recently approved Petronas’s Pacific Northwest Liquified Natural Gas facility on the coast of British Columbia, and has promised to help get Canada's fossil fuel resources to new markets, which means it would be likely to approve a new crude oil pipeline.

No decision yet on Enbridge pipelines, says Jim Carr's office

The Trudeau government is scheduled to decide on the $6.8-billion Trans Mountain expansion, a west coast pipeline proposed by Texas-based Kinder Morgan, by Dec. 19.

Media reports earlier this week suggested that Natural Resources Minister Jim Carr would announce decisions on Enbridge’s Line 3 and Northern Gateway pipelines this week, but Carr's office said on Friday that the announcement would come a bit later.

The Line 3 expansion would allow Enbridge to modernize, widen and increase the capacity of an aging and leak-prone pipeline to 760,000 barrels per day between Hardisty, Alberta and Superior, Wisconsin. This is nearly double its current capacity due to existing pressure restrictions imposed for safety reasons.

The Northern Gateway project is widely expected to be rejected since it would result in a significant increase in oil tanker traffic off of the northern B.C. coast, a situation that clashes with a Liberal government pledge to introduce an oil tanker ban for that region.

McKenna said that each project is considered on its own merits, and that the transition to a clean economy won't happen over night. Stressing the importance of balancing economic and environmental concerns, she added that "we need good jobs, we need to grow our economy, and we also need to reduce emissions."

"I certainly can't announce any decisions right now, but there will be decisions announced shortly," McKenna said.

But Greenpeace Canada climate and energy campaigner Mike Hudema told the Canadian Press this week that if Line 3 were approved but Northern Gateway rejected, it would set back Canada’s efforts to combat climate change.

“It will be a great day of celebrations for communities in northern B.C., but a bad day for climate action in Canada overall,” said Hudema. “You’re opening up new resources and emissions.”

The ascension of president-elect Donald Trump has also injected new life in the Keystone XL pipeline project that would see Alberta crude shipped from Hardisty, Alberta to the Gulf Coast of the United States. The controversial project had been stalled by President Barack Obama, and was widely considered dead in the water until Trump’s election victory just over two weeks ago.

When asked about Trump, McKenna said that she expected more people she met at recent international climate change negotiations in Morocco to be downtrodden following his victory. But that wasn’t the case.

“Instead, everyone was more resolved than ever to take climate action. I think there was a lot of interest in Canada playing a leadership role, and I think we’re going to step up,” she told reporters following her keynote.

Trump has called climate change a hoax perpetrated by the Chinese government in the past, but hinted at his “open mind” on climate change in an interview with the New York Times, in which he repeated several debunked theories promoted by climate doubters.

McKenna said that, even with Trump as president, the market shift that the Paris Agreement set in motion is bigger than any single government.

-With files from the Canadian Press and Mike De Souza.

Canada tries to get everyone singing carbon Kumbaya