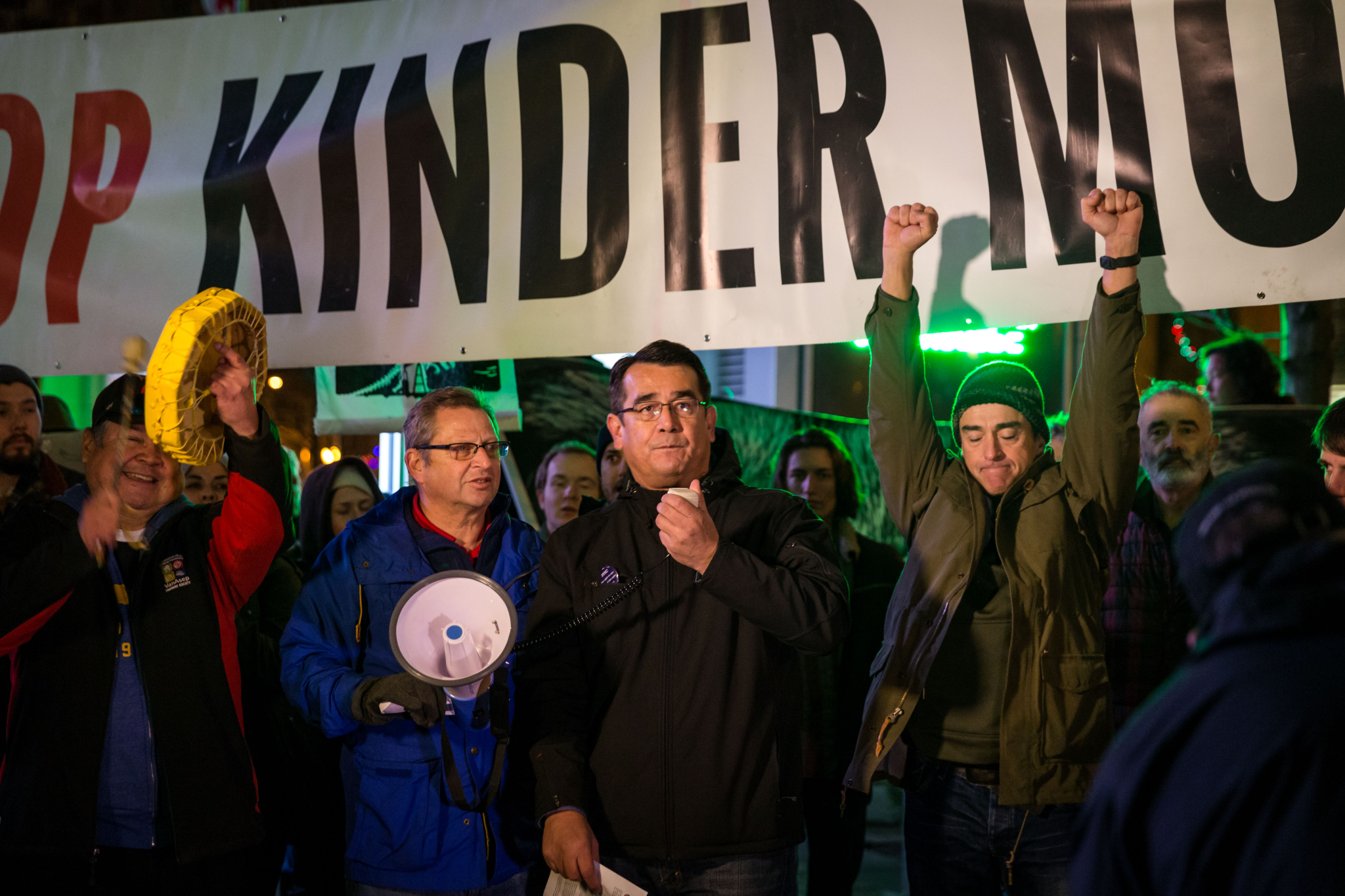 It only took an hour after Prime Minister Justin Trudeau announced approval of Kinder Morgan's pipeline expansion project for protesters to gather in downtown Vancouver.

Kinder Morgan plans to expand the existing 60-year-old Trans Mountain pipeline, increasing capacity from 300,000 to 890,000 barrels of oil per day from Strathcona County (near Edmonton) to Burnaby (near Vancouver) and increasing oil tanker traffic seven-fold through Burrard Inlet.

Trudeau, in the same announcement, rejected the controversial west coast Northern Gateway pipeline proposal from Calgary-based Enbridge Inc. and approved another Enbridge project to expand its Line 3 pipeline from Alberta into the U.S. Midwest. He had repeatedly mentioned during the election campaign that he would reject the Northern Gateway project, but had hinted since 2014 that he was interested in seeing the Trans Mountain expansion succeed.

Industry and business leaders across the country praised the prime minister's decision, saying Trans Mountain would lead to jobs and growth for oil producers struggling due to low global commodity prices.

But several hundred people who gathered outside Vancouver's CBC building disagreed. A number of speakers at the protest warned that Trudeau's announcement would spark the type of violent confrontations now underway in North Dakota, where the Standing Rock Sioux tribe have joined forces with environmental activists in an effort to block construction of the Dakota Access pipeline.

Small protests were also staged in other cities, including Ottawa, as well as outside Trudeau's riding office in Montreal.

"We make important decisions in the national interest and then we work hard to demonstrate that it's the right decision," Trudeau said Wednesday as he went into a weekly Liberal caucus meeting. "There will be some people who aren't happy. That we know."

The Kinder Morgan project is also championed by Alberta NDP Premier Rachel Notley, but one federal New Democrat, Burnaby South MP Kennedy Stewart, was at the front of the crowd on Tuesday night to rally opposition.

Stewart said that Trudeau "betrayed the trust of British Columbians" by approving the Kinder Morgan expansion, after promising in the election campaign to conduct a fair and comprehensive review. Stewart also invited fellow opponents to engage in civil disobedience, referencing a protest on Burnaby Mountain two years ago that resulted in the arrest of over 100 citizens, ranging from university professors to First Nations leaders.

"We showed Kinder Morgan on Burnaby Mountain, and we're going to show them again," he said.

Not every Liberal MP is on board with Kinder Morgan's Trans Mountain pipeline expansion. During his announcement, Prime Minister Trudeau noted that Terry Beech, the Liberal MP for Burnaby North-Seymour, has been one of the pipeline expansion's most articulate and substantive critics.

Joyce Murray, a Liberal MP for Vancouver Quadra who has been vocal about climate issues, told reporters on Wednesday that she was "disappointed" for herself and for many in Vancouver Quadra and British Columbia. But she was pleased to see that the government was proceeding with a ban on oil tankers in the North Pacific along with rejecting Enbridge's Northern Gateway project.

Trudeau said he was listening and expected to hear more about his decision in the future.

"I have heard and listened very carefully to the many diverse perspectives that exist in BC on this project," Trudeau said at a news conference announcing his decisions on Tuesday. "Indeed one of its most articulate and substantive critics is a caucus colleague, (Liberal MP) Terry Beech. Others will be opposed to this project for their own reasons. We respect that and we respect their right to hold and voice their beliefs but to them and to all Canadians I want to say this: If I thought this project was unsafe for the BC coast, I would reject it. This is a decision based on rigorous debate, on science and on evidence."

A number of scientists have questioned whether Trudeau's decision was based on evidence, noting that Kinder Morgan and the government have failed to release information on the company's mitigation plans to protect killer whales or to clean up spills. According to Canada's National Energy Board, the whales are likely to face significant adverse impacts from the project and the regulator is requiring that Kinder Morgan mitigate this risk.

Some scientists outside of government say there's not enough evidence available to confirm whether any of the company's plans are adequate.

"We’d like to see that information and science in full," said Caroline Fox, a post-doctoral conservation scientist at Dalhousie University and Raincoast Conservation Foundation.​ "It’s pretty difficult to comment on mitigation strategies that you can't fully examine."

Adriane Carr, a city councillor with Vancouver's Green Party, said she was surprised the project was approved.

"I'm not sure how many of you were listening, but Trudeau did not mention the words 'climate change' in approving this project," she said. "This Prime Minister engendered such hope in us...and when he went to Paris and said we will be global leaders in climate change, to keep the climate below two degrees (Celsius), weren't we all so proud?"

"Then, he said we'll approve two pipeline projects, and protect the climate too," she said, prompting laughter from the crowd.

Others said Trudeau raised false hope with early promises on climate and reconciliation with Indigenous peoples.

​Mike Palecek, president of the National Union of Postal Workers, criticized the prime minister for speaking about Indigenous reconciliation after being elected last year, and approving the Kinder Morgan pipeline despite opposition from a number of key First Nations along the Trans Mountain pipeline expansion route.

"I have a message for the Prime Minister. With all your talk about reconciliation and justice....All of these promises have just been laid bare tonight, as you announce you're ramming through this pipeline without the consent of the people who have been guarding our air, water and land for 10,000 years. You can either be serious about climate change, or you can expand the tar sands. But you cannot do both."

"The risks outweigh the benefits. We need a well-managed petroleum industry that provides good jobs and wealth for our communities," Gavin McGarrigle, a B.C.- area Unifor director, said in a statement. "This decision ignores very serious risks posed by this project."

McGarrigle also said the pipeline route would put the commercial fishery at risk of a catastrophic spill into the Fraser River in B.C..