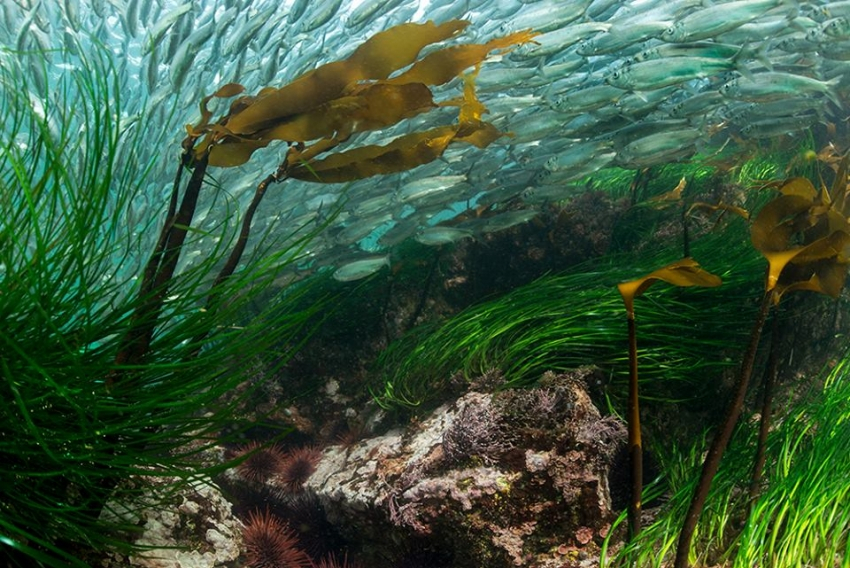 We’ve heard a lot about the threat of Kinder Morgan’s Trans Mountain pipeline to the endangered Southern Resident killer whale. But the same tankers that threaten those whales also pose a life-and-death risk to one of my favourite fish, the Pacific herring.

For most of my decades-long career as a marine biologist in Canada, my research has focused on fish behaviour and acoustics in several species. The Pacific herring is one of them.

These miraculous fish are, in my estimation, an indicator species. The herring link plankton and small fishes with larger fishes, seabirds and marine mammals; they are sought after by chinook salmon, which in turn, feed the the Southern Resident killer whale population, and they support important aboriginal, commercial and recreational fisheries.

Even the Texas-based oil giant, Kinder Morgan, has recognized their great ecological and economic value and classified herring as an ‘indicator species’ in its proposal to the federal government on the controversial Trans Mountain expansion. The company would add 980 kilometres of new pipeline to triple the capacity of an existing system that transports hundreds of thousands of barrels of oil from Alberta to the West Coast daily. It would send local tanker traffic soaring and a small fleet of heavy oil tankers along the B.C. coast every year.

This pipeline expansion has already been approved both by the feds and the B.C. government.

The herring deserved more careful consideration than they got, both from Kinder Morgan, and from the federal scientists who evaluated this project. Here’s what you may not know about the role of sound in the lives of fish.

Trouble mating with tankers around

The inner ear of fish resembles that of other vertebrates in basic structure and function, and fish can use the “soundscape” — the mix of sounds characteristic of a habitat — to find prey, spawning areas and mates, avoid predators and other dangers, and locate desirable habitat. Fun fact: Many larval fish find appropriate coral reefs on which to settle by listening for sounds of their own species.

Many fish make sounds themselves when competing for food, territory or mates, advertising nest sites, attracting mates, defending eggs and young, or when deterring potential predators.

But unfortunately for these remarkable creatures, shipping noise is loud. And the great length of the tankers that would be used for Trans Mountain’s shipping — roughly 245 metres — plus the increase in tanker traffic from five to 34 extra tankers each month, has the potential to mask sounds of critical importance to fish.

It could interfere with navigation, perception of prey or predators, and mating. It’s especially difficult to avoid as well, as it comes from a moving source, and is audible at great distances. In fact, global concern over effects of shipping noise has increased over the last 30 years as the number of commercial vessels has grown.

The most productive of five herring stocks in B.C. — the Strait of Georgia stock — is the likeliest to be affected by shipping noise. These herring migrate twice yearly between offshore feeding and inshore spawning grounds through Juan de Fuca and Haro Straits, which already have heavy oil, cargo, and recreational ship traffic.

Consultants should be hired independently

Stantec Ltd., the Edmonton-based consultant that investigated the effect of shipping noise on fish for the Trans Mountain proposal, based its evaluation on the effect of shipping noise on Pacific herring from oil tankers partly on a paper I wrote with a colleague. The paper, published in 1984, dealt with the responses of groups of herring to playbacks of sounds of the fishing fleet. The three largest vessels recorded were 15,18 and 20 metres long — paltry in comparison to Kinder Morgan's proposed 245-metre Aframax tankers.

Herring avoided sounds from these vessels significantly more often than sounds from smaller vessels, but Trans Mountain concluded that the response was not intense enough to cause "large scale displacement of ﬁsh or invertebrate populations from foraging, spawning, rearing or migrations areas," or "otherwise aﬀect their distribution or abundance." Even Trans Mountain's public relations material focuses on the effect of shipping noise on whales, rather than fish.

In 2015, while reviewing Trans Mountain's conclusions on shipping disturbance, scientists from the Department of Fisheries and Oceans were asked not to include the "potential effects of underwater noise on prey species, such as fish," and focus only on marine mammals.

I believe Stantec minimized the possible consequences to the fishes of a large increase in shipping noise with regards to Kinder Morgan's Trans Mountain tanker plans. Consultants should be hired by an independent body rather than a proponent, and should focus on accurate and objective reporting rather than on shepherding a company's proposal through the regulatory maze as expeditiously as possible.

Canada has no federal laws or standards specifically regulating shipping noise, but the Canada Shipping Act, the main law governing marine transportation, gives the government broad powers to protect marine waters from damage due to navigation and shipping activities. The Trudeau government has not used these powers to adequately reduce or restrict shipping noise from tankers, and so has missed an opportunity to set a precedent for regulating noise from all commercial vessels in Canadian waters. Its new National Oceans Protections Plan, which has no legal force, also fails to consider the effects of noise fish, preferring instead to focus on marine mammals.

And of the 157 conditions attached the Trans Mountain expansion project, none deal with shipping noise and its impact on fish directly. As part of its plan to protect marine mammals however, Trans Mountain has said it may use ship quieting technology.

But unless corrected at a much larger scale, inaction on ship noise will significantly raise the probability of acoustic stress for herring as well as for the endangered Southern Resident orca population, whose recovery would benefit from strong noise-reduction legislation.

Pacific herring are too valuable, ecologically and economically, for Canada to risk imposing significant and possibly damaging changes to their acoustic environment. We do not have enough data to make a definitive statement about the effects of shipping noise on wild fish, but this doesn’t mean that the issue is unimportant.

Similarities in the way fish and other vertebrates hear, as well as relatively new field observations of fish, support the use of the precautionary principle. The precautionary principle directs Kinder Morgan to abandon the Trans Mountain project, but failing that, the government must at least require the company to use quieting technology on all its existing and new tankers and monitor and control their speed, as noise increases with speed.

Herring and other marine fauna already face such challenges as warming water, habitat destruction, and ocean acidification. They deserve a quieter environment.

Editor's Note: This story was updated at 4:50 p.m. to provide clarification on a statement about shipping frequency.

By Jenny Uechi | News, Energy, Politics | January 11th 2017
Reports from the Race to a Safer World

In its environmental assessment of the Kinder Morgan Trans Mountain pipeline expansion project, the Federal government used a species-by-species approach, which is neither ecologically appropriate nor practical. DFO’s Pacific Region Fisheries Protection Program (FPP) actually asked the DFO Science Branch to focus on marine mammals and not on fish. However, no species lives in isolation, independent of others; the herring-chinook-southern resident population of orcas shows why an ecosystem approach is essential. I hope that the "gen-X" environmental assessment process (now under development by the Federal government) will use such an approach.

How will it be logistically

How will it be logistically possible to safely guide up to 34 tankers, each 245 meters long, into and out of Burrard Inlet on what would need to be a daily occurrence? There is already a great deal of traffic in and out of the inlet each day and indeed local traffic back and forth across the inlet as well. I have worried about the south coast of Vancouver Island but I should probably focus concern for the Lion's Gate Bridge and Stanley Park. Greed causes insanity it seems and in this case may surely lead to massive destruction to the shores of the city of Vancouver.