Here's an economic way you can stop oil expansion 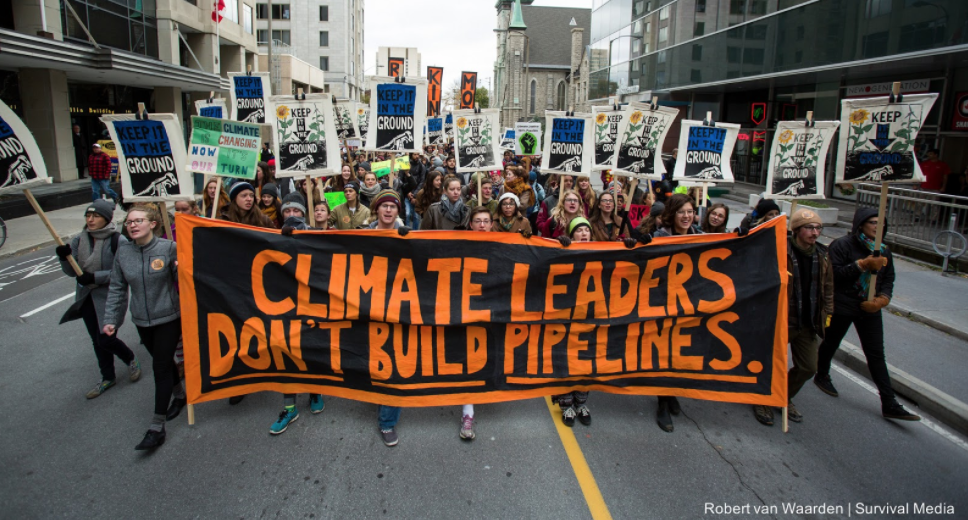 The outrage and courage I’ve seen from friends and community members after the federal and B.C. governments approved Kinder Morgan’s Trans Mountain expansion is both heartbreaking and inspiring.

The Trans Mountain expansion, if you’re unfamiliar, would add 987 kilometres of new pipeline to triple the capacity of a system that already transports more than 300,000 barrels of oil from Alberta to the West Coast every day.

The Texas-based fossil fuel company’s executives may not yet see or feel the depth of our resolve to prevent the pipeline, but they will.

The fossil fuel divestment movement has become a widespread youth climate campaign in North America. We target institutions of public trust, such as post-secondary, government, or religious institutions, pressuring them to remove financial investments in public companies that own the largest fossil fuel reserves.

Our concern is that extraction and burning of fossil fuels would cause the world to drastically surpass its emissions reduction targets and increase global warming well beyond two degrees Celsius.

Inspired by the success of the divestment movement against apartheid in the 1980s, fossil fuel divestment campaigns seek to invigorate the moral narrative for climate change action. We use arguments like, “if it’s wrong to wreck the planet, then it’s wrong to profit from that wreckage” to stigmatize the fossil fuel industry, and shame institutions for investing heavily in fossil fuels while branding themselves as sustainability leaders.

I have been organizing with fossil fuel divestment campaigns for nearly four years. It led me to pursue a master’s degree at the University of Victoria studying the divestment movement here in Canada. Let me tell you, it has been slow and difficult for Canadian campaigns to make headway with campus administrations, although there have been partial victories.

This includes Concordia becoming the first university to initiate a separate divested fund, and the University of Ottawa, and Simon Fraser University which have both pledged to reduce the carbon footprint of their investments by 30 per cent by 2030.

In my research, I began to hear thoughtful reflections from movement organizers wondering if their efforts were perhaps better directed elsewhere. I started to feel like divestment was losing momentum.

But after watching Prime Minister Justin Trudeau and B.C. Premier Christy Clark approve Kinder Morgan’s pipeline expansion despite intense resistance from nearby communities and First Nations, deep concern from the scientific and environmental community, and a flurry of court challenges — my resolve for divestment has never been stronger.

Last week students from Divest Dalhousie used a 30-second selfie opportunity with the prime minister to ask him about implementing the UN Declaration on the Rights of Indigenous Peoples — highlighting another unfulfilled campaign promise. The video went viral, showing our frustration that Trudeau, the minister of youth, appears willing to have photo-ops but not conversations with us.

As students, we’ve seen how disrupting the status quo ignites climate change conversations on our campuses, and we want to take the fight off campus too — on the streets, the steps of Parliament, and soon, the front lines of this pipeline project.

But the divestment movement does more than protest new fossil fuel infrastructure projects; we have a long-game strategy that challenges the pervasive influence of the fossil fuel industry holding us back from climate action.

Kinder Morgan had 368 lobby meetings with the federal government before Trudeau announced his decision, and has contributed more than $38,000 to the BC Liberals in the last five years. The divestment movement has been quick to call out Trudeau’s “we-can-have-both” approach to pipelines and climate action. This is the same double-speak heard from university administrators who brand themselves as climate leaders while simultaneously supporting the fossil fuel industry with their investment portfolios.

The power the fossil fuel industry holds through its access to policy and decision-makers, and in its relationship to institutions of intellectual and moral leadership, is the real target of the divestment movement.

Neither the fight against Kinder Morgan nor campaigns for fossil fuel divestment are sufficient to address climate change on their own, but understanding these movements as connected is essential to increasing their effectiveness and advancing the climate movement. I believe that the West Coast, with support from groups fighting against climate change and for indigenous sovereignty across Canada, will stop this pipeline.

But we must also stop investing in companies that are pushing these projects elsewhere. Our coast is a diverse and critical ecosystem, and a breathtakingly beautiful place — but so are the plains of North Dakota, the rainforests of the Amazon, the Arctic tundra of the North, and many others’ homes potentially damaged by fossil fuel industry activity.

As we fight against pipelines in our own backyards, we must not overlook the opportunity to support other communities in their fight against fossil fuel expansion by refusing to invest in those companies with enough fossil fuel reserves to exceed two degrees of global warming this century. Because when it comes to climate change we are all in this together.

We can no longer accept prioritizing the highest, short-term returns over the needs of frontline communities. It cannot be socially acceptable to profit from the violation of indigenous rights. We can no longer afford to invest in climate change.

We must make our institutions divest from fossil fuels.

Emilia, thank you for this

Emilia, thank you for this important work. Profit is a corrupting influence. I hope that this is not what is happening in the Trudeau government.

Go for it girl! Outrage,

Go for it girl! Outrage, like what I feel now is a wonderfully powerful motivation and divestment is an important target to direct it to.

As someone who, like a lot of people, have put savings into RRSP's, it is difficult to divest yourself from individual oil companies that might form only a small part of the entire portfolio. My wife and I have reinvested our RRIF's into ethical stocks, but even so, we would have to look very closely at each of the companies in which our money is invested. But, we will do that very soon. The least we can do.

Why not invest in the future

Why not invest in the future including green technology. Solar Share is a co-op that gives a 5% yearly return for 5 years. It can be included in an R.R.S.P. or R.I.F.F. also. Check it out. www.solarbonds.ca

Why not invest in the future

Why not invest in the future including green technology. Solar Share is a co-op that gives a 5% yearly return for 5 years. It can be included in an R.R.S.P. or R.I.F.F. also. Check it out. www.solarbonds.ca