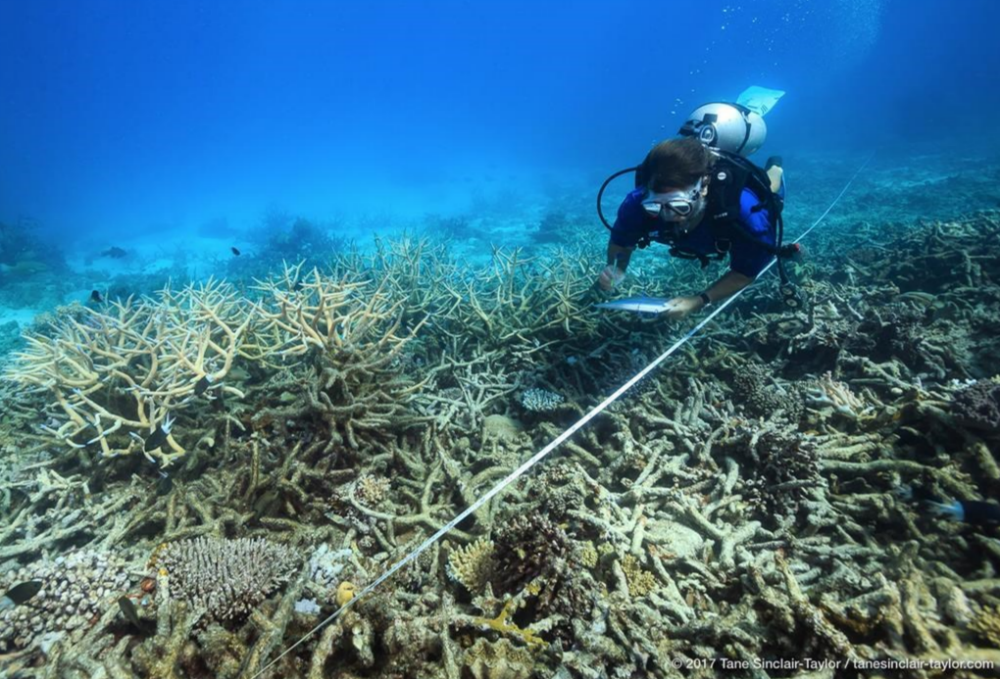 A scuba diver studies the Great Barrier Reef in Australia, in the midst of rising ocean temperatures created by climate change. Photo courtesy of the ARC Centre of Excellence for Coral Reef Studies
Previous story

Reducing pollution and curbing overfishing won’t prevent the severe bleaching that is killing coral at catastrophic rates, according to a study of Australia’s Great Barrier Reef. In the end, researchers say, the only way to save the world’s coral from heat−induced bleaching is with a war on global warming.

Scientists are quick to note that local protection of reefs can help damaged coral recover from the stress of rising ocean temperatures. But the new research shows that such efforts are ultimately futile when it comes to stopping bleaching in the first place.

"We don’t have any tools to climate−proof corals," said Terry Hughes, director of the ARC Centre of Excellence for Coral Reef Studies in Australia and lead author of the study being published on Thursday in the journal Nature. "That’s a bit sobering. We can’t stop bleaching locally. We actually have to do something about climate change."

Across the world, scores of brilliantly colored coral reefs once teeming with life have in recent years become desolate, white graveyards. Their deaths due to coral bleaching have grown more frequent as ocean temperatures rise, mainly due to increasing greenhouse gases in the atmosphere. The hot water stresses corals, forcing them to expel the colorful algae living inside them, which leaves the corals vulnerable to disease and death. Given enough time, bleached coral can recover if the water cools, but if the temperature stays too high for too long, the coral will die.

Preserving coral reefs is crucial, given that human depend on them for everything from food to medical research to protection from damaging coastal storms. Scientists and policymakers have thus been scrambling to find ways to prevent bleaching. Last year, for example, Hawaiian officials proposed several measures they hoped would fight bleaching on the state’s reefs, such as limiting fishing, establishing new marine protected areas and controlling polluted runoff from land. The question was whether such efforts could provide the corals any resistance to bleaching, or just help them recover.

The researchers conducted aerial and underwater surveys of the Great Barrier Reef, which has experienced three major bleaching events, the worst of which occurred last year. The scientists found that the severity of bleaching was tightly linked to how warm the water was. In the north, which experienced the hottest temperatures, hundreds of individual reefs suffered severe bleaching in 2016, regardless of whether the water quality was good or bad, or whether fishing had been banned. That means even the most pristine parts of the reef are just as prone to heat stress as those that are less protected.

Prior exposure to bleaching also did not appear to provide any protective benefit to the coral. The scientists found that the reefs that were highly bleached during the first two events, in 1998 and 2002, did not experience less severe bleaching last year.

"I think it’s a wake−up call," Hughes said. "We’ve been hoping that local interventions with water quality and fishing would improve the resistance of the corals to bleaching. We found no evidence that that’s actually true, at least during a very severe event."

The study shows that older ways of thinking about reef management, such as reducing river runoff, are now moot points when it comes to preventing bleaching, said Kim Cobb, a climate scientist and coral researcher at the Georgia Institute of Technology in Atlanta.

"It all seems so quaint now, really," said Cobb, who wasn’t part of the study. "A future that we thought was decades coming is basically here."

The research also illustrated the gravity of the situation facing the 2,300−kilometre (1,400−mile) Great Barrier Reef. The team found 91 per cent of the reef has been bleached at least once during the three bleaching events. Even more alarming, Hughes said, is that a fourth bleaching event is already underway. Corals need years to recover from bleaching, so back−to−back events increase the possibility that the bleached coral will die.

The study shows that very intense coral bleaching events are no longer isolated and are happening more regularly, said coral reef scientist Julia Baum of Canada’s University of Victoria. That assertion has been further bolstered by the Great Barrier Reef’s latest bleaching event, which began a few weeks ago and which Baum says has stunned scientists.

"None of us were expecting the water to be heating up again right now," Baum said. "I think it’s beyond what any of us could have imagined. It’s our worst nightmare."

By Associated Press in News, Energy | March 15th 2017
State Of The Animal