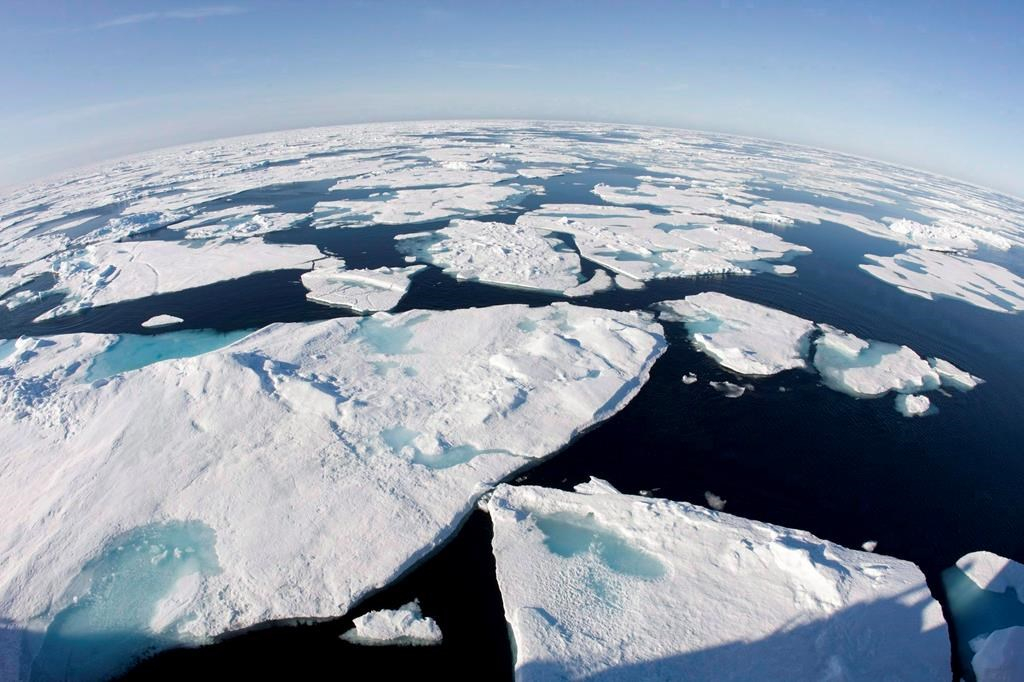 This July 10, 2008 photo made with a fisheye lens shows ice floes in Baffin Bay above the Arctic Circle, seen from the Canadian Coast Guard icebreaker Louis S. St-Laurent. File photo by The Canadian Press
Previous story
Next story

Arctic sea ice is at a record low for the third straight year.

The measurements from the U.S.-based National Snow and Ice Data Center say the ice reached its maximum extent on March 7.

It was the lowest level in the 38-year history of satellite record-keeping.

"I have been looking at Arctic weather patterns for 35 years and have never seen anything close to what we’ve experienced these past two winters," Mark Serreze, the centre's director, said in a release.

Sea ice is crucial to Arctic life from polar bears to plankton and is believed to influence southern weather patterns.

Recent research has suggested that a good part of sea-ice decline could be due to natural variability. But most of the losses are still blamed on climate change and are expected to increase as carbon dioxide continues to build in the atmosphere.

The National Oceanic and Atmospheric Administration, which partly funds the Snow and Ice Data Center, said Arctic temperatures this winter were the highest they'd been since 1900 when records began.

Other organizations, including the European Space Agency and the University of Washington, have concluded that not only is the sea ice extent smaller this year, the ice itself is thinner.

"Such thin ice going into the melt season sets us up for the possibility of record low sea ice conditions this September," said Julienne Stroeve, a data centre scientist and professor at the University College London.

The sea ice minimum, which occurs in September at the end of the melt season, first began breaking records in 2005. It broke the record for low extent again in 2007 and in 2012.

Antarctic sea ice reached its minimum extent for the year on March 3 at 2.11 million square kilometres, also the lowest in satellite records. However, the data centre reports Antarctic ice is highly variable and was at its highest level 2 1/2 years ago.

The National Oceanic and Atmospheric Administration is threatened with proposed budget cuts by the Trump White House.