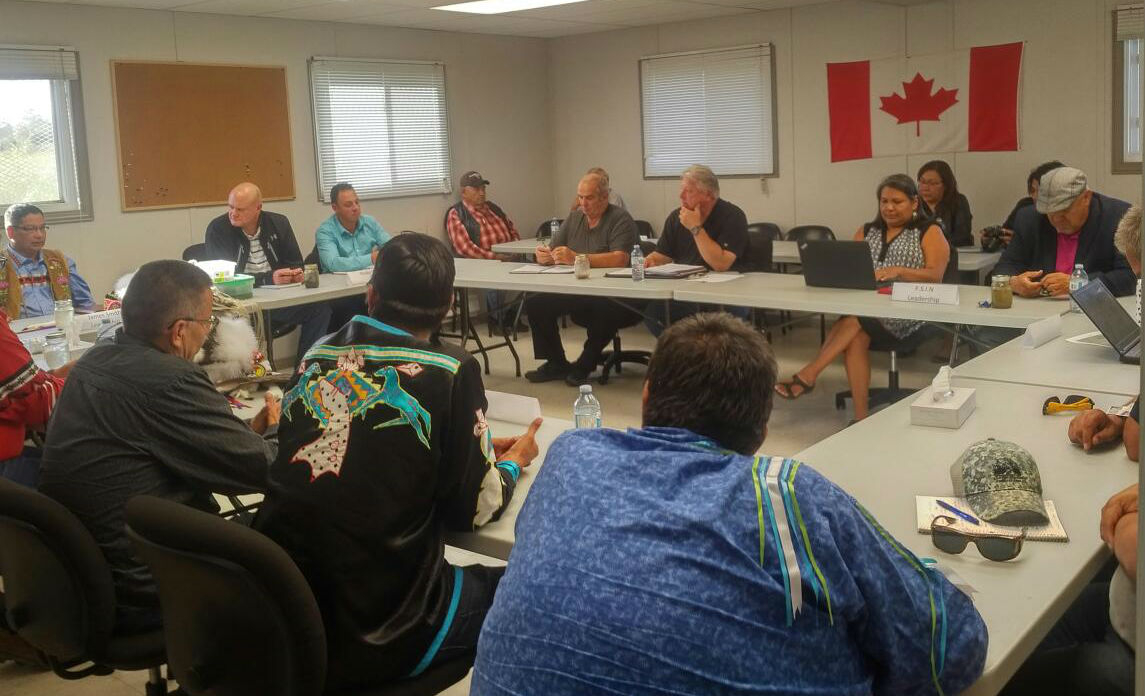 The ice has not yet thawed on the North Saskatchewan River, but Chief Wally Burns is sure there's damage below.

Last summer, a Husky Energy pipeline ruptured near Maidstone, Sask. spilling more than 200,000 litres of heavy oil and diluent into its waters. The disaster forced three municipalities to enact emergency water restrictions, and covered the banks of the James Smith Cree Nation with dead crayfish and an oily sheen.

The lasting impact of that contamination may not be visible now, said Burns, but once the snow and ice start to melt, he suspects the damage will be clear: tar-covered logs, lower fish yields, and scant wildlife along a river that once supported all kinds of critters, big and small.

Visible or not, however, the damage has led the central Saskatchewan nation to start negotiating with lawyers. Chief Burns said the community may soon be suing Husky for damages to their cultural and economic resources.

"I’m pretty sure everybody knows that (Husky Energy) is going to face a lawsuit," he told National Observer in an interview. "A lot of people really looked at it as a big slap in the face because they can’t go hunting, fishing, or gathering on the river."

The First Nation, located roughly 60 kilometres east of the City of Prince Albert, is currently "having discussions" with members of the Alberta Counsel legal team, said Burns. It's too soon to say when the community will take any formal action against Husky, he added, but the community is reviewing its bylaws for any violations that could lead to charges.

Husky Energy issued James Smith Cree Nation a cheque for more than $145,000 last September to compensate its chiefs for expenses related to cleanup, consultation, and containment of the spill. In November, it issued a notice to the First Nation that it would not provide any financial compensation for meetings with its chiefs and council apart from that amount.

Chief Burns' comments came just as a provincial investigation into the spill was handed over to Crown prosecutors, who will determine whether the Calgary-based company should be charged for delays in responding to, and reporting, the spill on July 20, 2016. Government investigators say the leak began a day before the spill was discovered, and that the pipeline's alarms warned of potential problems long before the line was shut down for scheduled maintenance at 7:15 a.m. on July 21.

Husky said last summer that pipeline monitoring indicated pressure anomalies at 8 p.m. on July 20 and the company started a shutdown at 6 a.m. According to Saskatchewan's Ministry of Justice, its investigation into the incident is not criminal, but could result in fines of up to $1 million per day if Husky is found guilty.

"I am deeply concerned about this... and I think our actions to date, and going forward... show that we've taken this very seriously," Energy and Resources Minister Dustin Duncan told reporters on Thursday.

Husky Energy has told other media outlets that it is fully co-operating with the investigation and respects "the process that's underway." In reference to a separate pipeline spill in southwestern Alberta last week, company spokesperson Mel Duvall also told The Canadian Press:

"We take every incident seriously and will use what we learn from this incident to further improve our operations."

Protection of the Band Waters

Husky has been secretive about the timeline of events leading up its spill last summer, which contaminated the North Saskatchewan River so badly, it flunked five water quality tests and forced the cities of Prince Albert, North Battleford, and Melfort to shut down their intake from the river for almost two months.

The company has not responded to National Observer's requests for details on its mitigation efforts, water testing methodology, or engagement with James Smith Cree Nation since last August. To date, the incident is estimated to have cost Husky roughly $107 million in cleanup efforts.

If James Smith Cree Nation pursues legal action against Husky, Chief Burns said the community will draw upon its legally-binding set of bylaws, which contain clauses against pollution and the discharge of any substance that "prejudicially affects the health, comfort, safety or welfare of users of the Band Waters." The documents, provided to National Observer by the community, also forbid disruption or impairment of the First Nation's right to fish on its waters.

If Husky or any of its employees are found guilty of breaching these bylaws, they could be fined up to $1,000 per day, face 30 days of jail time, or both.

"Last year I had to turn an 82-year-old lady away from the reserve because she just wanted to put her feet in the river," said Chief Burns. "I think we’ll probably see more debris and the substance on the river once it thaws."

In November 2016, National Observer published an exclusive investigation in which various pipeline safety engineers agreed that Husky Energy likely could have prevented the spill last summer through regular maintenance and testing. In its engineering reports on the accident, Husky identified the cause of the breach as a "a sudden, one‐time event in a section of the pipe that had buckled due to the force of ground movement."

In an emailed statement to National Observer, Saskatchewan's Ministry of Environment said it has not been in contact with James Smith Cree Nation since spill recovery ended in October 2016, but "significant resources will be invested in ongoing assessment, remediation, monitoring and testing to ensure oil is recovered and impacts are assessed in 2017."

"A corrective action plan is in development, including a new 2017 Shoreline Cleanup and Assessment (SCAT) program," said Darby Semeniuk, manager of communication services for the ministry. "This will be submitted in spring 2017, with field work expected to begin in early May. This is expected to include engagement with First Nations communities and Aboriginal associations."