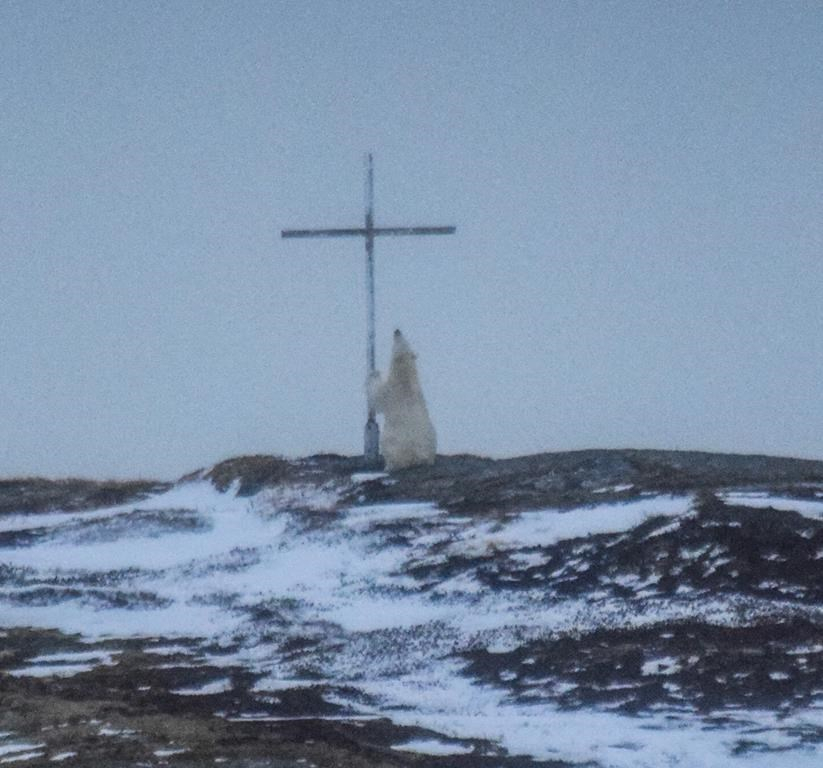 A polar bear looks up at a cross in Wesleyville, N.L., on Wednesday, March 29, 2017. Photo by The Canadian Press
Previous story
Next story

Jessica Andrews was scanning through dozens of photos she took of a polar bear roaming around her backyard when she came across one that stopped her in her tracks.

The large animal was squatting beneath a white cross, its paws together and raised skyward as it looked up in a seemingly reverential pose.

"I didn't notice it when I was taking them, but when I started to go through to edit them, oh my God, I was like, 'Holy crap, he's praying!'" the 22-year-old said from her home in Wesleyville, a shoreline community on Newfoundland's central coast.

"I was amazed, I mean, beyond amazed."

The slightly grainy photo shows the bear sitting on its haunches on a barren, snow-covered patch of rock as it looks up to the top of the white cross.

Andrews said she heard there was a polar bear on the small island behind her house soon after she arrived home from work at about 5:30 p.m. Wednesday. She grabbed her camera and spotted the bear wandering around some old fishing boxes on the island before it slipped into the water and ventured over to a neighbouring island.

She kept shooting photos and watching the bear with binoculars, insisting that the curious animal was staring back at her. She said the bear then approached the cross, sniffed around the base and then put his paw on it as if to climb up the main beam.

"He stood up and put his paw on the cross and that's the picture I took," she said. "It was almost like he was staring right at me."

Andrews, who had never seen a polar bear before, said it's not uncommon for the animals to visit the area. She said the animal meandered around the islands and rolled in the snow before disappearing from view Wednesday evening.

"It looked like he was having so much fun and it made me happy!" she said, adding that she took about 200 photos of the bear.

Police have issued a warning to people in the area to stay away from the bear.

The headline of this article

The headline of this article was bad enough when it was originally published, but to see N.O. jump on the b.s. bandwagon and further spread such absolute nonsense is very disappointing.