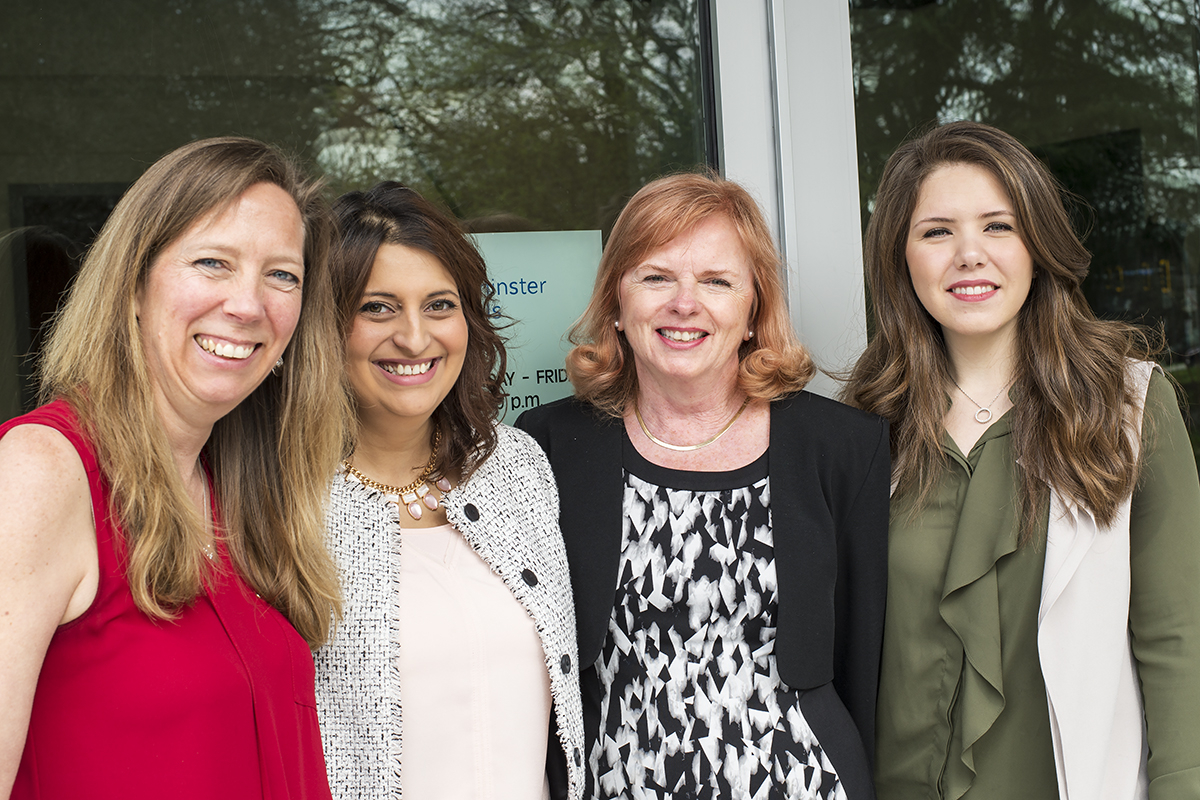 In the heart of New Westminster, B.C., school administrators and staff serve as a model for other communities around the world accepting refugee families.

Rather than wait for crises to arise, they organized a program to help teachers and front-line workers identify and respond to trauma.

Janet Grant, associate superintendent of schools in the New Westminster School District, recalls flipping through a November 2015 magazine when she paused while reading an article about Syrian refugees coming to Canada. The newly-elected Liberal Party had promised to bring in 25,000 Syrian refugees and New Westminster has historically attracted newcomers due to its inexpensive cost of living compared to Vancouver.

In the brief profile on Syria, two sentences caught Grant's eye: "mental illness and trauma are common given the experiences in Syria, in transit and in asylum countries. Symptoms may not appear right away and therefore, follow-up is crucial."

"After reading that, I thought, 'Wow, we really need to get on this,'" Grant said.

Grant picked up the phone and called Darryl Phelan, a registered counsellor and team leader for the Ministry of Children and Family Development. The two met at a coffee shop to talk about what they could do to prepare for the wave of Syrian refugees coming to their community. Mental health was on their list of top priorities.

Both recognized the need for teachers and staff to be able to tell the difference between real trauma, and normal behaviour among newcomers adjusting to Canada's culture.

"The last thing we wanted to do was to tell somebody, "Oh you poor thing! You must be traumatized!" Grant said, clutching her chest in a dramatic gesture. She said while it was important to be able to flag mental health issues, it was important not to misdiagnose children and put their families through unnecessary stress on top of adjusting to their new home in Canada.

Grant and Phelan understood the conditions that Syrian families fled from in the brutal civil war, which today involves alleged use of chemical weapons on children. They wanted to act immediately to prepare their staff to be ready when they saw the signs.

Soon, Grant and Phelan looped in Cameray Child and Family Services, which has specialized in treating trauma and mental health issues since 1972, and applied for a grant that led to $17,200 in funding from the United Way of Lower Mainland.

With some of the funds, they invited 51 front-line staff across the region, including school staff from Burnaby and Vancouver Coastal Health, to train people to recognize the red flags for trauma. With Syrian as well as Iraqi and Afghan children coming into schools in New Westminster in 2016, the front-line workers learned how to spot signs of distress and to refer children to counselling or other services in the community.

Cameray also hired Farah Dawood, an Arabic-speaking professional counsellor who had come from Baghdad, Iraq, as a teenager and understood the cultural nuances of treating refugees from Syria.

"I've experienced war. I know exactly what the families are going through, and I speak their language," Dawood said.

She said she sees the children who have not been able to cope with the experience of forced displacement by war.

"Even if you get out of the danger zone, [trauma happens] because you internally could not do anything to save yourself. You don't escape that energy that builds up in your body."

Dr. Sarina Kot is a Vancouver-based psychologist taught a seminar for school staff and settlement workers to recognize trauma. She pointed out some of the subtle cues to look for in children from war-torn countries like Syria.

One of the most common features, she said, is "re-experiencing" frightening memories from the past.

"A trigger could be seeing another child fall down," she said. "The (traumatized) kid might think someone's dying, or going to die. They might avoid recess or going outside, because seeing other children fall down is associated with very bad things in their mind."

She said another flag is hyper-vigilance in children, when they are always on edge, or, unable to sleep at night.

"Sometimes, this hyper-vigilance looks like aggressive behaviour. But teachers can tell if the child has a clear reasons to be angry, and when the child is acting aggressive for no obvious reason," she said.

One of the most troubling flags is a sense of hopelessness about the future.

"With some children, there's a 'doomed' feeling about the future," Kot said.

"They might say, 'Yeah, I'll probably die soon' and most kids don't think like that. Children might think, 'I'll be a billionaire'...or, 'I'll be a soccer player.' Whether these are realistic goals or not, they have some hopes for the future. But if a child has no hope for the future and thinks he'll die before age 30, that's not normal. This is the aftermath of trauma."

She said teachers aren't mental health specialists themselves and can't provide therapy, but schools can often be therapeutic places because they provide safety, routine, the opportunity to make new friends and to interact with accepting adults. Even without being trained in therapy, a teacher who can recognize the flags of trauma can provide reassurance when they see troubling signs.

"A teacher can tell a child: 'Look! He's alright. He fell down because he ran too fast, but see? He's walking again.' This isn't therapy. But it's very helpful to re-interpret safety, to show that running and falling is just normal recess activity, not like in a war-torn country when people are falling due to severe injury or death."

Holly Nathan is a communications coordinator at New Westminster's school district. She said Syrian students who may have trouble communicating can find an outlet in art and play.

Children who seem shy or withdrawn in school come out of their shell when they are able to express themselves through the arts, she said. Last month, she saw Syrian refugee children perform at a theatre event organized by local settlement workers, which showcased their culture through songs and dance.

Dawood said one of the most difficult aspects of helping traumatized children is the stigma it carries in cultures where counselling and therapy are not widely understood. As counsellors and front-line workers interviewed previously said, some refugees avoid counselling, even in cases of severe anxiety or depression, because they feel it's bad form to air their personal problems to strangers.

Phelan argued this is a problem that goes beyond Syrian families, and that many locals are also reluctant to seek the mental health help they need.

"The stigmatization of mental illness issues knows no cultural or ethnic bounds," Phelan said. "This is an issue we battle all the time, even with our Western adolescent population. Sometimes, the biggest barrier is their own judgment and beliefs."

One vital aspect of the program was ensuring timely mental health support for refugee children. According to some refugee mental health workers previously interviewed by National Observer, the lack of fast access to counselling can be a major problem for refugees in Greater Vancouver.

Phelan lets out a deep sigh when asked about how children's mental health issues get prioritized in B.C..

"Obviously, someone who is suicidal and coming right out of a hospital after a psychotic break will go straight to the top of the list," he said sadly. "But when you move certain kids up the waiting lists, other kids who have been waiting longer get bumped. Whose issues trump someone else's?"

At the Ministry of Children and Family Development, Phelan and his staff deal with "moderate to severe" mental health issues, and bump cases up depending on priority, whereas at Cameray, those with "mild to moderate" issues are put on a first-come, first-serve basis.

In some communities in B.C., the wait can be up to six months, he said, and that's for children with moderate to severe mental health issues. "When kids have to wait like that...sometimes, they get tired of waiting and just end up not getting the services."

But treating mental health early is vital, according to frontline workers like Kot and Phelan, to catch problems before they worsen into issues like substance abuse or violence.

"If it is dealt with appropriately when kids arrive, in the first two, three or four years, in a supportive community, they can become more successful learners, rather than becoming kids who manifest behavioral problems," said Kot. "If it's not treated, a grade five child will become grade 10, and can cause more problems for him or herself, as well as to the community. It's so much better outcome for a kid to be healthy and happy in school."

A community built around support for the most vulnerable

"Therapy alone will not help a child succeed. It's the environment they live in, the support they get at school, and at home," Rusnak said.

Phelan said the community support in New Westminster is unique. With just 60,000 people, it feels like a small town. Rather than jockeying for clients and contracts, community organizations tend to cooperate to best serve the most vulnerable.

"New West is a gritty community that's had a lot of social struggles. It's the oldest city on the West Coast and had a prison as well as addiction services. The community agencies all get to know each other really well," he said. "I've worked in many communities and I've never experienced such a collaborative place as New Westminster."

Angie Mapara-Osachoff, United Way of Lower Mainland community impact planner, said people at the highest levels, working in schools and government agencies, are creating new ways to help refugees. This sends a message to the entire student body and staff.

"Every program in the school is working hard to build a feeling of inclusion...so that when a child comes who is dealing with a traumatic situation, they're coming to a community that is welcoming and accepting," Mapara-Osachoff said.

"When a new child comes, from Syria, or other countries, we wrap our services around them so that wherever they go, they bump into someone who can help out. It's really special, the way this community comes together."