'Their light will always shine:' Ceremony marks Westray mine disaster 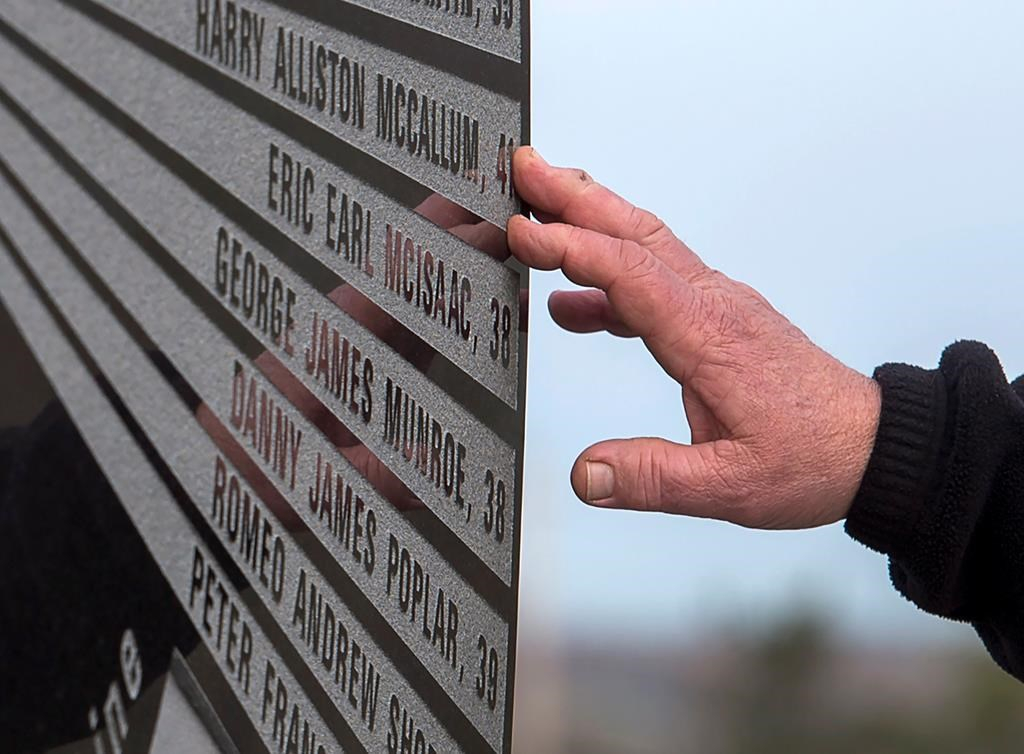 A hand touches the monument that honours the 26 coal miners who perished in the Westray mine disaster at the Westray Miners Memorial Park in New Glasgow, N.S. on Tues. May 9, 2017. Photo by The Canadian Press/Andrew Vaughan
Previous story
Next story

Twenty-five years after she lost her husband to one of Nova Scotia's worst coal mining disasters, Darlene Dollimont-Svenson still finds it difficult talking about the life they once shared.

"He was a fabulous man, but I don't know what to say about that because it's 25 years later and you have all these memories, and one doesn't really know if the memories are glorified fantasies or reality," she said, drawing a deep breath and pausing.

Thirty-six-year-old Adonis Dollimont and 25 other miners were in the final hours of a four-day shift at the Westray mine in Plymouth, N.S., when a coal seam spit a jet of methane gas that somehow ignited.

Fuelled by volatile coal dust, a massive fireball raced through the tunnels at 5:18 a.m. The explosion killed every man in the mine and tore off the metal roof at the pit entrance. In the pre-dawn sky on a rainy Saturday morning, the blast erupted in a roaring blue-grey flash that shook houses more than a kilometre away.

On Tuesday, Dollimont-Svenson was among 200 people who marched through an industrial park in New Glasgow to the Westray Miners Memorial Park, which is not far from the sprawling tunnels where 11 miners are still buried.

Led by a police car with flashing lights, the silent marchers carried bilingual banners with a message spelled out in black and white: "No more Westrays." Beside that stark message, a demand: "Stop the killing, enforce the law."

The early morning ceremony at the park featured prayers of remembrance and the reading aloud of each miner's name and age.

"We gather to hold memories close to our hearts," said Rev. Jim Webber-Cook, standing before a black granite monument that includes the names of the dead, each inscribed on rays of light emanating from a miner's lamp.

"We gather to fulfil those words that are enshrined here: 'That their light will always shine.'"

Dollimont-Svenson travelled from Ketchikan, Alaska, to attend the ceremony, which was part of a day-long series of commemorative events.

"There have been a huge amount of people who have worked to make sure this doesn't happen again," she said afterwards as the sun emerged, the grass still glistening with dew.

"I'm here to honour them for supporting us ... For the widows, without all of these people our husbands would be forgotten. It is a moment of strength."

She recalled how the mine was a source of great promise when it opened in 1991, offering well-paying jobs in an economically depressed area that saw its last coal mine close in the 1970s.

"This was a dream for all of these young men," she said. "They had new homes, new cars, friends and a 25- or 30-year life to retirement... And those men needed to go to work. And if they spoke up about what was going on (at the mine) there were profanities from the management... and they were sent packing."

Most of the Westray miners knew the tunnels were unsafe, she said, recalling how a group of them sat in her living room to discuss the dangers — four days before the explosion would kill many of them.

"They discussed the danger of the coal dust," she said, noting managers had been repeatedly warned to take steps to deal with this well-known hazard.

"They discussed how they had to tuck their pant legs into their boots and duct tape them shut to keep themselves clean. They all knew, should anything happen, it wasn't going to be good. It wasn't for lack of safety material, it was a lack of management will to allow the time to do the necessary safety work."

In 1997, a Nova Scotia Supreme Court justice concluded the disaster was the result of "incompetence, mismanagement, bureaucratic bungling, deceit, ruthlessness ... and cynical indifference."

The public inquiry found Westray management and its owner, Clifford Frame, were ultimately responsible for conditions at the mine.

In 1993, the RCMP charged Toronto-based Curragh Resources Inc. and two of its former managers with manslaughter and criminal negligence causing death. But the case eventually fell apart when the Crown concluded convictions were unlikely.

To this day, union officials and relatives of the dead miners say justice was not served.

"I think of the 26 workers who lost their lives for no reason other than greed, incompetence, apathy and neglect," union leader Stephen Hunt told the ceremony. "There was no justice in those cases. But the families were determined to fight for justice."

He said that determination has led to big changes in laws and regulations aimed at reducing workplace deaths, injuries and illnesses. Hunt, a Canadian director with the United Steelworkers of America, said Nova Scotia, British Columbia and Alberta have all introduced new rules aimed at ensuring safer workplaces.

"We see charges across the country now," he said. "Not enough CEOs go to jail yet, and we don't want a whole bunch of them in jail — just one or two would be good. That would send a message to companies that it's not OK to take lives or injure people for the cost of doing business."