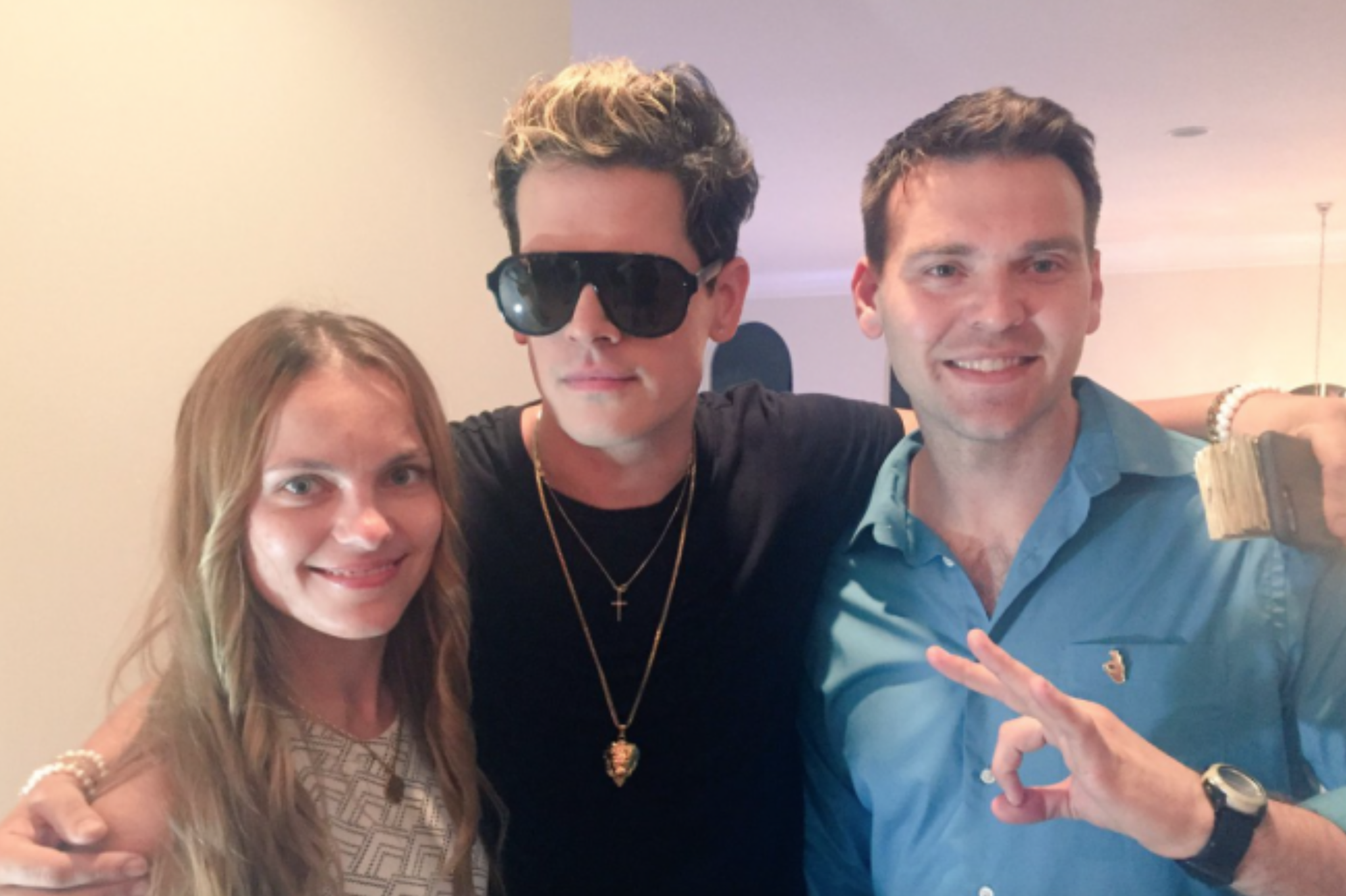 On Sunday the world exhaled as France's Emmanuel Macron triumphed over the far-right white nationalist Marine Le Pen. Yet Russia's apparent attack on the French election presents profoundly unsettling global security implications. Vladimir Putin is baring his teeth to Europe and the West.

Next up, Germany, which goes to the polls in September.

Now comes the stunning report that cyber analysts have identified Jack Posobiec, a journalist for Canada's Rebel Media as playing a crucial role in driving the massive Macron data dump through social media.

We'll get to that in a minute, but meanwhile, here's a question: Was this all presaged by an obscure and cryptic tweet on April 13th?

By way of background, Mike Cernovich is an online conspiracy troll who has a gig with the notorious extremist Alex Jones and his Infowars site.

Levant is extraordinarily well-connected in Canadian conservative political and media circles, and was formerly associated most strongly with pro-oil advocacy. Rebel Media has veered sharply toward far-right extremism since the election of Justin Trudeau. Strangely, Rebel Media has expanded in the US and started hanging out with the dregs of the political scene there.

It has also begun to activate its Canadian contributors in a manner that appears designed to inflame racial tensions in the US.

McInnes, whose claimed cause of Western chauvinism looks a lot like white nationalism, also leads a men's group that has opened a "military division" to confront left wing activists.

Which brings us back to Mike Cernovich and Jack Posobiec.

Rebel Media's major debut on the global scene came when its Washington "bureau chief," Jack Posobiec, was identified as the origin of the first tweet linking a massive cache of Russian-hacked documents dumped onto the conspiracy website 4chan. He attached the hashtag #MacronLeaks. He also used #MacronGate over this period.

The #MacronLeaks hashtag, from the moment Posobiec tweeted it, was the primary social media propellant of the hacked Macron data, according to cyber-intelligence analysts at the Atlantic Council's Digital Forensics Research Lab. They also concluded that bots played a significant role from the outset. Some 40 minutes later, Wikileaks tweeted the link with Posobiec's hashtag, and the Internet erupted.

The appearance of bot activity, observed independently by both the DFRL and Belgian academic Nicolas Vanderbiest, from the first minutes after Posobiec's tweet, strongly suggests a planned and coordinated campaign. Others online also spotted anomalous activity patterns in two Macron hashtags used by Posobiec.

No evidence directly connects Posobiec to observed bot activity, and he denies using them.

The thing is, this is not Cernovich and Posobiec's first time at the Russian cyber-rodeo.

Cernovich and Posobiec were both heavily involved in Pizzagate, a fictional Internet rumour that Hillary Clinton's campaign chairman John Podesta ran a pedophile ring out of a Washington, D.C. neighbourhood pizza parlour. Podesta, as is well known, was victimized by a Russian hacking operation during the election.

Pizzagate was a cause célèbre for both Cernovich and Alex Jones of Infowars, the latter who also made a name for himself claiming that the Sandy Hook massacre was a hoax by gun control nuts. Being crazy can make you famous.

Posobiec then poured gasoline all over the Pizzagate fire. Everything was fun and games until Edgar from South Carolina walked into the pizzeria with his assault rifle and shot the place up looking for Hillary's hostages. Thankfully, no one was hurt, but at least Jack got famous.

Analysts expert in propaganda and social media at the International Centre for Counter-Terrorism at The Hague identified the #SyriaHoax as "a clear example of a Russian influence campaign designed to undermine US credibility."

Both Americans picked up the hashtag early and propelled it through U.S. social media, with Posobiec specifically citing Cernovich.

So these two individuals in particular, have a history of connection to social media campaigns that originate with Russian hacks or propaganda.

From Russia, with love

And Rebel Media's man in Washington gets around. He has a Russian social media profile page, thanks he says, to his fiancée, Tanya Tay, who hails from Belarus, in the former USSR.

The night before Posobiec tweeted the massive Russian data dump, he and Tay attended a party thrown by Milo Yiannopoulos, and attended by Roger Stone and Sputnik contributor Cassandra Fairbanks.

Stone is the long-time Trump associate, dirty trickster and "full-time provocateur" now under FBI investigation over his famous tweet saying "Trust me, it will soon be Podesta's time in the barrel." apparently signaling advance knowledge of the impending Wikileaks release of John Podesta's emails. Coincidentally, these are the emails that sparked Pizzagate. Stone has also been in contact with the suspected Russian asset Guccifer.

Posobiec's tweet of his photo with Mike Flynn at last summer's GOP convention was retweeted by Mike Flynn Jr. Flynn was fired as US National Security Advisor because he lied about contacts with Russians.

Celebrating on May 6, just before the French election, Posobiec was quoted in a tweet by Sputnik's Fairbanks as saying, "I just raped Marcon (sic) worse than when he was 15."

Then there's the curious business of this writer's experience contacting Rebel Media's Ezra Levant for comment. It is an instructive footnote.

Asked for contact and comment on Posobiec, Levant replied entirely in Russian that he and Posobiec had met at the Russian embassy. When pressed for a more serious response, he simply pranked me, asking me to call him at a phone number which turned out to be the Russian embassy in Ottawa. Then he tweeted our exchange, including my phone number.

His tweet tagged a number of extremist influencers, including Posobiec, who all retweeted it, filling my mentions with several hundred retweets and responses. While passed off as the hilarious troll of a journalist, this is also an established technique for directing social media harassment onto a target. Levant tweeted the exchange again a day later.

The appearance of a coordinated campaign

It's fairly obvious that Rebel Media's "Washington bureau chief" is not a journalist covering Washington, but a provocateur who engages in disinformation. In January, Buzzfeed reported his apparent involvement in efforts to smear anti-Trump protesters with Rape Melania signs.

Although Posobiec denies any knowledge or involvement with bots, they certainly appear to be involved with his tweets. Perhaps that's purely a coincidence.

Both Posobiec and Cernovich have history with online viral fake news campaigns, and coordinated together on a previous Russian propaganda operation identified as such by the ICCT. All three of their major campaigns--#Pizzagate, #SyriaHoax, and #MacronLeaks--involved Russian-hacked data or a Russian-led campaign.

A hacking and propaganda operation has two components: a) the retrieval of data through hacking and posting it on an accessible platform; and b) the swift and widespread dissemination to the public--which is the objective of the campaign.

Think about this from the perspective of Putin and Russian intelligence. If you had just pulled off the hacks of the century and wanted to shake up an entire country's election, would you just post them on 4chan and hope for the best? Or would you have a proven social media plan, and deploy people who know how to execute it?

Posobiec and Cernovich are proven masters at propelling explosive messaging through social media, and who have driven social media on Russian propaganda before.

Which could, it must be said, be the world's biggest coincidence.

Significantly, the Macron leaks contained tampered and falsified data, an even darker twist which may go some way to explain why they weren't leaked to Wikileaks in the first place.

Why is Rebel Media getting mixed up in this?

What are Ezra Levant's big moves coming that got Mike Cernovich so excited?

Why Rebel Media is mixed up in this is not a rhetorical question, but one of grave urgency for both global and Canadian national security.

We cannot afford to be lulled into complacency by Macron's win, nor to try to avoid an unpleasant confrontation. That data is still out there. Russia is still trying to destabilize Western democracies. We don't know where Putin will strike again.

What are Cernovich, Posobiec and Rebel Media doing?

It will soon be Angela Merkel's time in the barrel.

Will we be ready this time?

Editor's Note: This op/ed was updated at 11:27 a.m. PT with new comments from Mr. Posobiec and for clarification.