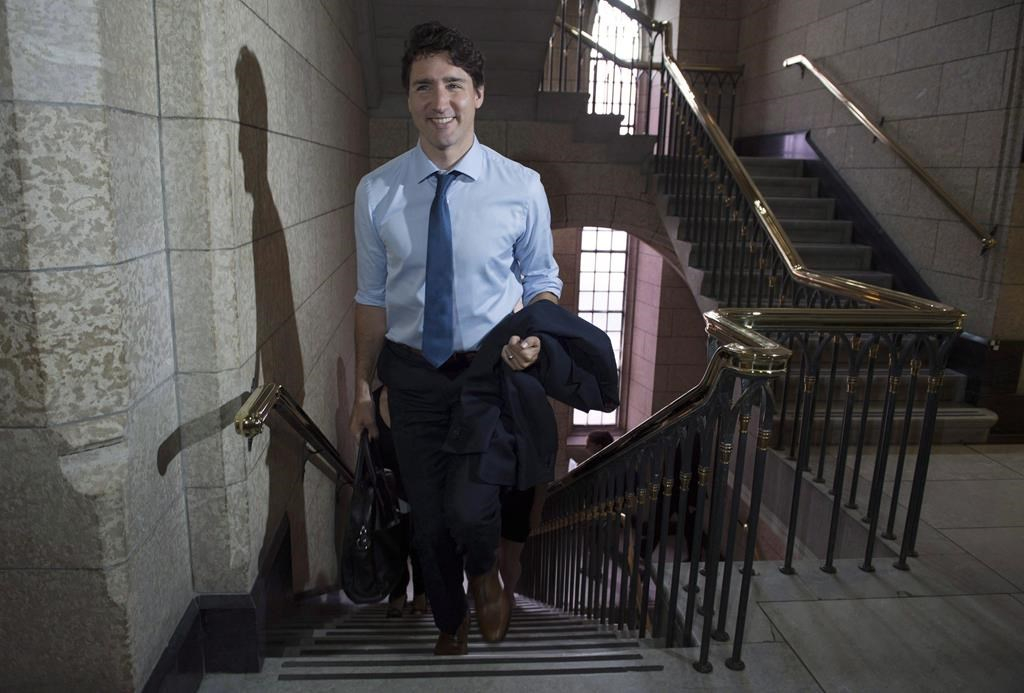 Canadian Prime Minister Justin Trudeau makes his way up a flight of stairs to his office on Parliament Hill in Ottawa on June 16, 2017. File photo by The Canadian Press/Adrian Wyld
Previous story

With a potential impasse brewing in the Senate over his government's latest budget, it's tempting to wonder if Justin Trudeau privately regrets his decision to turn the upper house into a more independent, less-partisan chamber.

Not at all, the prime minister insisted in an interview with Global's West Block on Sunday, it's working out exactly as he'd hoped.

Emmett Macfarlane, who advised Trudeau back in 2014 on the kind of Senate reforms that could be achieved without requiring a constitutional amendment, doesn't think so.

"I don't think the prime minister could have expected much better than this," says the University of Waterloo political scientist.

Based on Macfarlane's advice, Trudeau kicked senators out of the Liberal caucus and, once in power, created an arms-length body to recommend non-partisan individuals for appointment to the upper house.

Since the new regime was instituted, the Senate has passed 25 government bills. On six of those bills — 25 per cent —senators proposed amendments, a big jump over the average four per cent of bills that the pre-reform Senate used to amend.

Some of the amendments on those six bills were accepted by the House of Commons, some were modified and others were rejected. In every case, senators ultimately bowed to the will of the elected chamber and passed the bills, even if they didn't get all the changes they wanted.

The record thus far "means that we're developing a convention of deference to the elected chamber," says Peter Harder, the government's representative in the Senate.

"We are a complementary body to the House of Commons. That doesn't mean we're a rubber stamp. It means that we do deliberate, we do review, we do make recommendations and sometimes amendments," he says, adding that the government "takes those amendments seriously" even if it doesn't always accept them.

While Trudeau may "not perhaps every day, in every way" think the Senate is behaving the way he'd hoped, Harder says it is "generally" working out as he intended.

Macfarlane agrees, saying it's "absurd to call the Senate's current behaviour a constitutional crisis," as some critics have done.

"Not a single piece of legislation has been blocked. Where the House has asserted its will and rejected Senate amendments, the Senate has, thus far, relented and passed the bill."

The Senate's proclivity for amending bills does mean it takes longer for legislation to be passed. And that's contributed to the Trudeau government's relatively light legislative record — it has enacted half the number of bills that were enacted by the previous Harper government by the halfway point of its mandate.

But Macfarlane says amending bills is "perfectly appropriate" behaviour for a chamber that was created by the fathers of Confederation precisely to provide sober second thought. And if that causes delays, he says that's not a bad thing if it results in improvements to legislation.

"I would argue it's not even being obstructionist, but helpful."

Indeed, in two instances where the Commons accepted Senate amendments, Macfarlane says "the government arguably saved itself from future constitutional challenges. I'd say that counts as an improvement."

Even with his budget implementation bill at stake, Trudeau last week reiterated that he respects and encourages the Senate to recommend improvements to legislation.

"I think it's an enhancement to our democratic institutions and to the governance of our country," he said Friday.

Still, Trudeau drew the line at a Senate rewrite of the budget, arguing that it's the elected House of Commons that has authority over budgetary matters.

That's not entirely correct. The Senate is constitutionally prohibited from initiating money bills but it can amend them or even outright defeat them, as has happened on rare occasions in the past.

It seems unlikely, however, that the Senate will force a showdown over the current budget bill.

Independent Sen. Andre Pratte — who sparked the talk of a constitutional crisis with a motion to hive off provisions dealing with the creation of a new infrastructure bank into a separate bill — has said he'd bow to the will of the Commons if it were to reject the change.

The fact that senators are even considering tinkering with the budget suggests to Harder that the culture of deference to the elected chamber is not yet "fully established" in the more independent-minded Senate.

Still, he predicts senators will ultimately realize they "have the responsibility to ensure, at the end of the day, there is a budget that the government can accept and the House of Commons needs to endorse."

For the Senate to be justified in defeating a bill, Harder argues it would have to be "a pretty provocative piece of legislation" — a bill that senators believed was unconstitutional, for instance.

But even then, newly liberated senators might choose to defer to the Commons.

Indeed, a year ago, many senators maintained the government's assisted dying law was unconstitutional because it applied only to individuals who were already near death. But once the Commons rejected a Senate amendment to remove the near-death proviso, most of those senators, including Pratte, acquiesced and passed the bill.