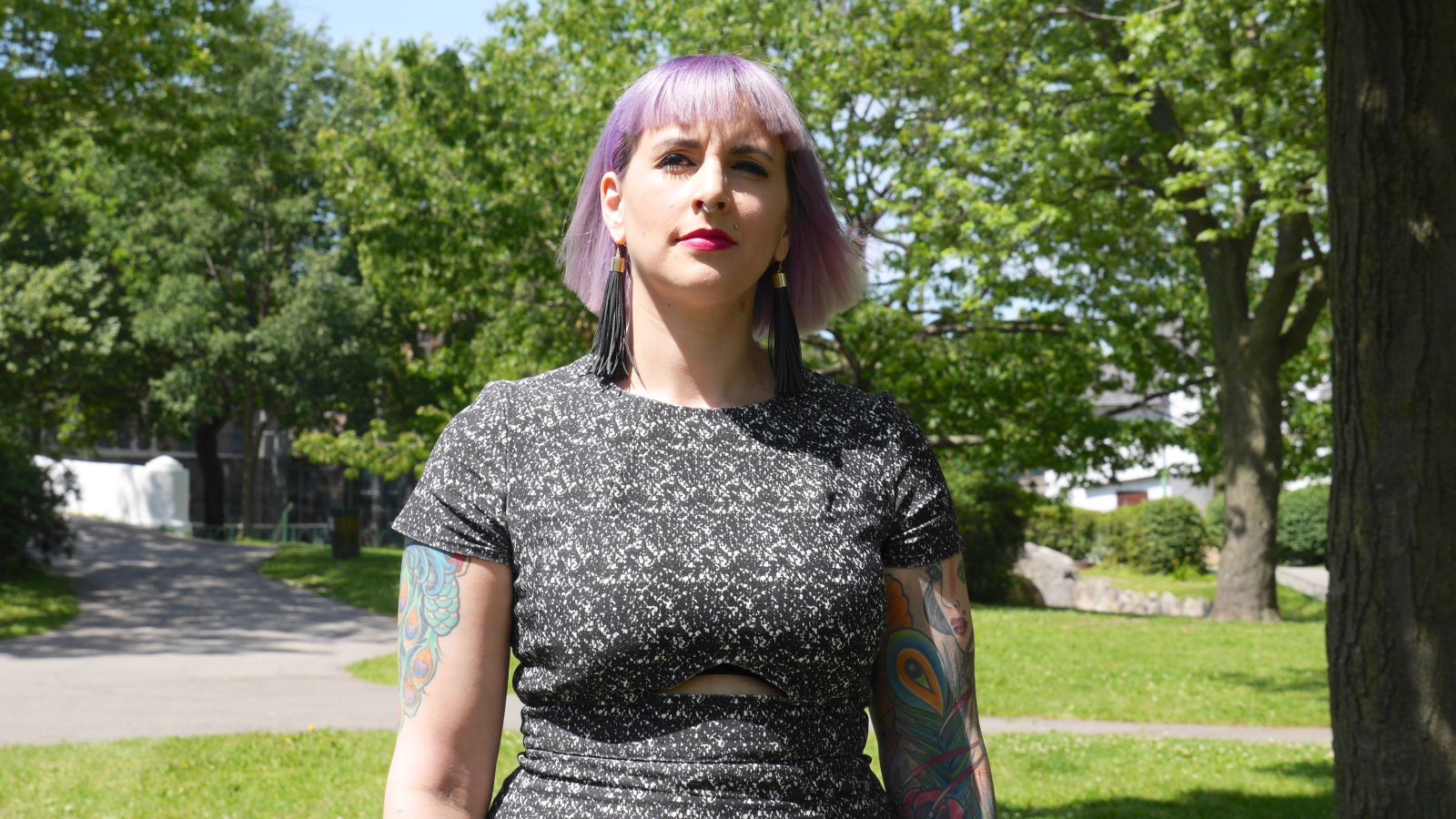 Mélanie Doucet says she blacked out after her drink was spiked with a drug during a festival. Picture taken on July 5 in Montreal. Photo by Clothilde Goujard
Previous story
Next story

Mélanie Doucet went to Montreal's outdoor international music festival, Osheaga, five years in a row. But in the fifth year, a frightening experience made it different.

In 2016, she says her drink was spiked with a drug during a Red Hot Chili Peppers concert. She'd lost her friends in the crowd and she blacked out.

It was something she had experienced in a bar when she was younger and she recognized the signs: her speech was slurred, her vision started to go and she lost control of her body.

She knew she had to get out of the festival as fast as possible. Osheaga estimates 135,000 people attended the festival on the weekend Doucet was there. The Red Hot Chili Peppers were the day's headliner and the area was packed.

"I blacked out on and off while I was trying to get my way out of the crowd and I was fairly close to the front so it took me a long time to get out," Doucet said in an interview with National Observer.

"It was quite scary, I had to latch on to people because I couldn't control my body anymore and I was bending over backwards and I wasn't able to walk straight and I was clearly in distress and no one would help me. They kept brushing me off or looking at me in disgust."

She thought someone nearby had spiked her drink with the drug in order to attack her.

“I know how it goes, usually they wait until you're in a blackout state and then they pretend they're your friend and take you to a place where they can sexually assault you. So I had the instinct to leave, to try to flee the situation,” she said.

No one offered to help her, Doucet said. But she luckily managed to get out on her own, making it back to her boyfriend's home after taking the metro and calling him for help.

After Mélanie Doucet was drugged at a music festival and a security official refused to help her, she started a petition calling for the City of Montreal to make crowded public events, like festivals, safer for women. Video by Clothilde Goujard

The next day, she tried to alert Osheaga security staff. But she was shocked by their reaction.

“I asked to speak to the supervisor of security at the gate and she totally brushed me off,” Doucet said.

After posting on Osheaga’s Facebook page about the incident and getting no response, she felt compelled to draw attention to what had happened to her and what could happen to others. She posted her story on her own Facebook wall and caught the attention of media, such as CBC, Radio-Canada, CTV and even in the Toronto Sun.

Still Doucet felt nothing was happening, even after sending a registered complaint letter to Evenko, the company behind Osheaga, with the help of a lawyer donating their time. The head of security of the CH Group, which owns Evenko and other event companies holding festivals in Montreal like Spectra, called her but she said he couldn't promise any change.

A spokesperson for Evenko told the CBC last year that the company would investigate the incident, and that it takes the safety of festival goers seriously.

Doucet wasn't convinced that the festival organizers were making an effort to prevent any future assaults. So she took matters into her own hands.

“I decided that I was going to do a petition to get more public attention on the issue and hopefully get the city’s attention because they’re the one granting the event permits," Doucet said. "From there, because I tagged the mayor (of Montreal on change.org) and the person responsible for festivals and a few other city officials, I guess it got their attention.”

A few weeks later, in November 2016, the city of Montreal mandated the Conseil des Montréalaises, an advisory body within the municipality focused on women's issues, to investigate women’s safety at outdoor events in Montreal.

The Conseil des Montréalaises was created 13 years ago during a summit in Montreal in response to calls for the city to do more to integrate women's issues and concerns into its decisions and policies.

The Conseil offers the city advice upon request, and can also make recommendations on its own when it sees issues that need to be addressed.

“The Conseil is a bit like a bridge between the groups of women and the city,” said Cathy Wong, president of the Conseil des Montréalaises. “We are here to represent the voices of these groups who tell us every year about their worries, their demands, and the challenges they face.”

After five years working for the Conseil, Wong has learned to navigate the city's bureaucracy to propose policies that can have an impact on the daily lives of women in Montreal. That means working on topics such as work-life balance issues for women involved in local politics, the experiences of homeless women, sports activities offered to girls, professional challenges for women blue collar workers, and safety for women all of ages in public spaces.

Working on making Montreal safer for women is nothing new. For the past 30 years, women activists have pushed to adapt the city’s streets, buildings, transit, lighting, arenas and large events to women’s needs.

They organized exploratory walks as one of their first activities. These consisted of getting a group of people together for a walk in a specific neighbourhood, near a metro station or a park, and then taking note of surroundings and potential risks and discussing how to address them. For example, if they noticed that a particular street corner was dark at night, they could recommend adding more lamp posts to light up the area.

Rita Rachel Dandavino participated in one of the first walks, in the early 1990s.

“We were a small group of young professional women who would meet for lunch to talk (about urbanism issues). We did this first exercise on Mont Royal to see the needs people might have. We’d asked a police woman to come with us because we wanted to do the walk during the night and didn’t want to go alone like that,” she said.

Dandavino later became the coordinator of the Metropolis Women International Network, a group that brings together city officials from around the world who share best practices. She said that progress to make cities safer for women is slow, but that their goals are within reach.

"The issue (of women's safety in the city) is better known today, whereas before, people pretended it didn't exist," said Dandavino, who has two children in their twenties. "But it's still something we have to pay close attention to. We shouldn't think there's nothing else to do."

Manon Gauthier, a member of Mayor Coderre's executive committee for culture, heritage, design, and the status for women, said it was important for the city to pursue these efforts.

“Women do experience the city differently from men and it’s within that perspective that Montreal has committed to creating a social context where women are able to fully benefit from life in their own city,” she explained.

“We know also that security considerations were always at the forefront of our charter of rights and responsibilities.”

One of Montreal’s main safety policies for women was a transit initiative introduced in 1996, which lets women get off city buses between stops at night. The city also introduced a guide for safe urban planning that it regularly updates to inform and educate stakeholders about best practices for events and urban development.

The guide covers a number of issues and recommends precautions that people need to take when they are at risk or in danger.

While Montreal has been striving to develop new safety policies for women for the past 30 years, Gauthier also recognizes it can be slow. In 2016, Montreal ranked 11th for its security for women out of the 25 biggest Canadian cities according to the Canadian Centre for Policy Alternatives.

“It takes time and change and understanding. Montreal comprises 52 per cent of women. You need to educate people in that respect… Building trust is primary and it’s not only about educating the population but educating the main partners which also means a change of culture at the Service de Police de la Ville de Montreal, firefighters services.”

Major events can represent danger for women in Montreal

There are many other initiatives in Montreal and the city was considered safer by all the women interviewed in comparison to other major global metropolitan areas.

But some behaviour continues to represent a danger for many women in Montreal.

The report by the Conseil des Montréalaises about safety for women during outdoor events found that more than one in two respondents said they had been harassed or assaulted during such events in Montreal. Even more problematic for Cathy Wong, the same percentage did not know where to go for their safety and to get help. And most did not even report these events to security staff or the police.

“Many (of these women) don’t feel the need to report (these events) because they felt they wouldn’t have support, credibility and the space to do it,” she said.

“Clearly when we are talking about women’s safety, we are talking about a need for a cultural change. It’s a culture that is profoundly anchored in --unfortunately -- (inequality) between men and women, between communities like LGBTQIA and racialized people. We need to change that feeling of shame and move this idea that women’s responsibility is their own to a collective responsibility. Women’s safety concerns everyone.”

Wong remains optimistic about the report because she said that event organizers were “sincerely” willing to change their safety policies and training for their staff.

Montreal's International Jazz Festival has already started to deploy all-women staff wearing pink armbands with two swallows that identify them as people to get help from during the festival.

Mélanie Doucet, who was present as officials released the report, said she hopes it means festivals will be better equipped to recognize and deal with incidents of violence against women during their events.

"Actually it felt vindicating in a sense because something bad that happened to me was actually transpiring into something positive," she said. "Really the whole point of me coming forward (was) to try to make change happen so when I'm seeing things like this happening, it gives me hope that things will be different moving forward."

Kudos to Doucet and her

Kudos to Doucet and her tenacity.
As long as the bad behaviors are socially accepted and go punished, proactive measures will continuously be needed to protect and promote women's rights.