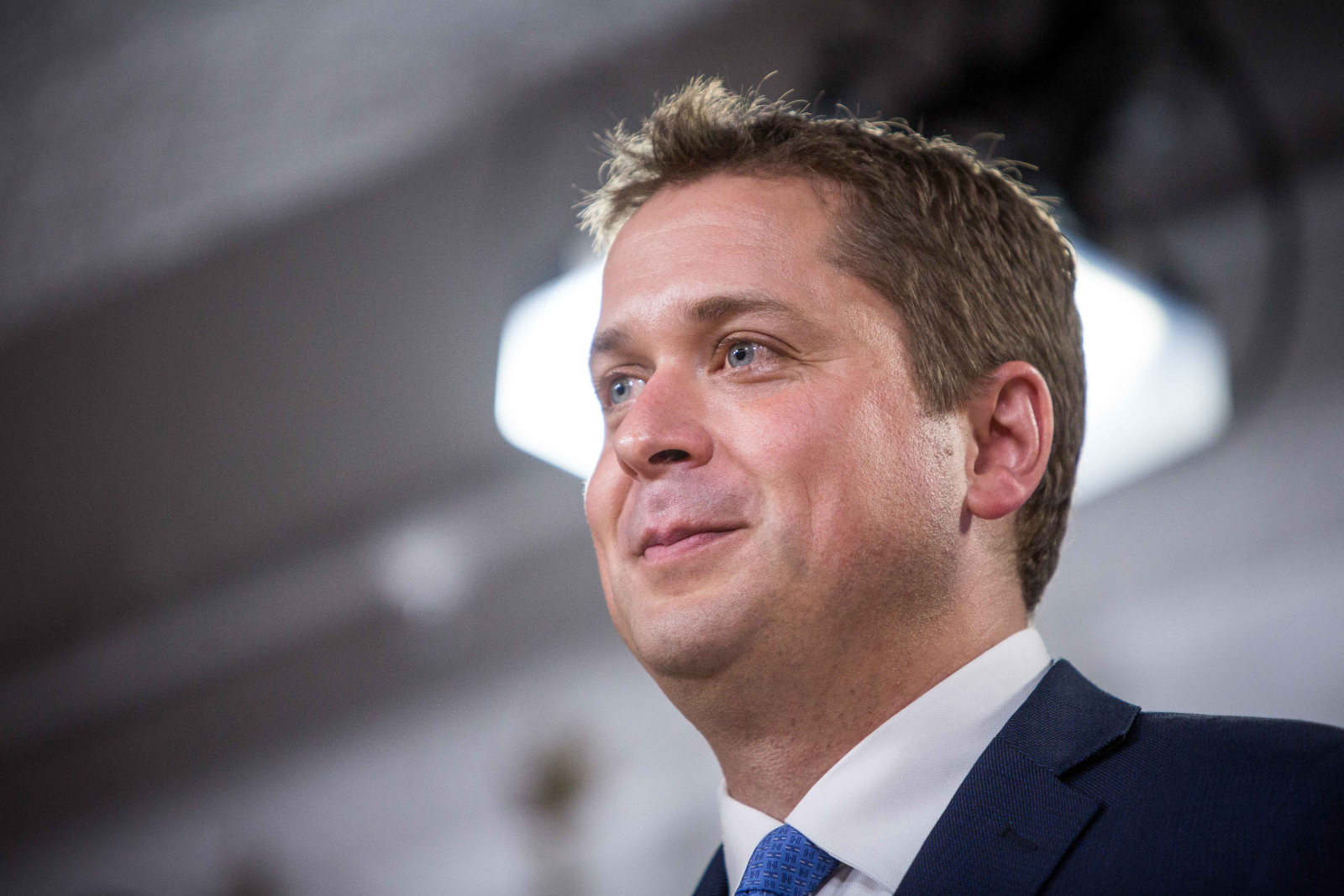 Conservative Leader Andrew Scheer speaks at a press conference in Ottawa to unveil his leadership team on July 20, 2017. Photo by Alex Tétreault
Previous story
Next story

“My message is that the Conservative Party is an inclusive party, that welcomes the contributions of people of the Muslim faith, and I’m glad that they make up our cultural fabric,” said Scheer, in response to questions from National Observer at an Ottawa press conference.

“The Conservative Party, myself, and Members of Parliament, whenever hateful acts are committed against any group, we denounce those.”

Scheer, MP for the federal riding of Regina-Qu'Appelle, made the comments after a series of attacks on the Muslim community in Canada, including a defaced Quran and offensive messages sent to the mosque where six people were shot dead in January, a town nearby voting to block a Muslim cemetery, and racist signs posted in Saguenay.

A day earlier, Scheer had tweeted that "the people who sent the package to the Quebec Islamic Centre must be brought to justice. Cowardly acts of hatred have no place in Canada."

Scheer’s comments welcoming Muslims follow criticism from other federal parties that Conservatives have stirred up anti-Muslim sentiment through "irresponsible" statements and policies, such as a Tory proposal during the 2015 election campaign to create a police hotline for Canadians to report "barbaric cultural practices."

Some high-profile critics have also warned that recent complaints about the Trudeau government's decision to make a $10.5 million payout to former Guantanamo Bay prisoner Omar Khadr are stoking intolerance in the population.

Toronto-based legal analyst Azeezah Kanji, writing in the Toronto Star, has linked the "outraged reaction to Canada’s settlement agreement with Omar Khadr" to "the demonization of Muslims."

And Mahar Arar, who was detained and tortured and who has received his own payout and apology from Canada, tweeted days earlier that “the uproar created by Omar's haters is not about his innocence or guilt. It's rather a mixture of political opportunism & bigotry/racism.”

Scheer and other Conservatives this month have rejected the reported $10.5 million settlement with Khadr, who also received an apology that Prime Minister Justin Trudeau said was because his Charter rights were violated.

On Thursday, Scheer continued to reject the payout. “Canadians don’t stand behind this issue” he said. His caucus has also drummed up criticism of the payout in U.S. news sources. Conservative MP Michelle Rempel appeared on Fox News while MP Peter Kent wrote an opinion piece in the Wall Street Journal, both lambasting the Liberal government over the payout.

Scheer rejected the idea that Conservatives were targeting the Khadr payout over his Muslim faith.

Raitt to be deputy leader

Scheer, who was elected to lead the Conservatives in May, made the remarks at an event unveiling his leadership team.

Scheer announced that Milton, Ont. MP Lisa Raitt will be his deputy leader, a party's second-in-command and the most senior elected position after Scheer.

"Lisa brings a wealth of experience in the private sector, and is a strong advocate for her constituents in Milton," said Scheer. He said he was "struck by Lisa's ability to connect with Canadians."

Raitt said she wanted to help bring the Conservative message to Ontario and to Atlantic Canada, where she has roots as a native Cape Bretoner. The Conservative Party has no representation in Atlantic Canada in the House of Commons, following the 2015 election when the Liberals captured all 32 seats.

Portage-Lisgar MP Candice Bergen, from Manitoba, will be the Conservative House leader, which manages day-to-day strategy in the House of Commons.

Scheer also named Richmond-Arthabaska MP Alain Rayes to be his Quebec political lieutenant, the leader’s primary stickhandler for Quebec affairs. Chilliwack-Hope MP Mark Strahl, from British Columbia, will be Scheer’s chief whip, in charge of trying to ensure that the Tory caucus votes along party lines.

Mr. Scheer, Is there some

Mr. Scheer, Is there some reason why you might feel compelled to declare that your party "welcomes Muslims"? If, for example, I made a point of saying that I welcomed Sri Lankans, the fact that I isolated them for a special remark makes them notable, of special interest to me. And if I declared my welcome -specifically for them- might it not seem that I was making amends- being conciliatory?
I suppose you are being conciliatory. You called a Supreme Court order for a government apology and the settlement awarded to a Canadian Muslim "disgusting". That Canadian Muslim when a child fifteen years old was thrown into warfare by his parents, then held at a U.S. camp off American soil and subjected to psychological and physical abuse for years. Canada's own dark role role was in the form of CSIS to feign interest in this person and then aim to get information from him. It is impossible to verify whether this child threw a lethal grenade--unless you like the results of "enhanced interrogation"... There are only scenarios, possible and at best plausible. Do you have a favourite?
If any "barbaric cultural practices" came to light in this Omar Khadr affair, they were those of the secret torture site at Guantanamo run by the USA- and CSIS collaboration.
To you, the ruling for compensation by the Supreme Court Of Canada was disgusting. I prefer rather to apply it to that CSIS collaboration at Guantanamo.