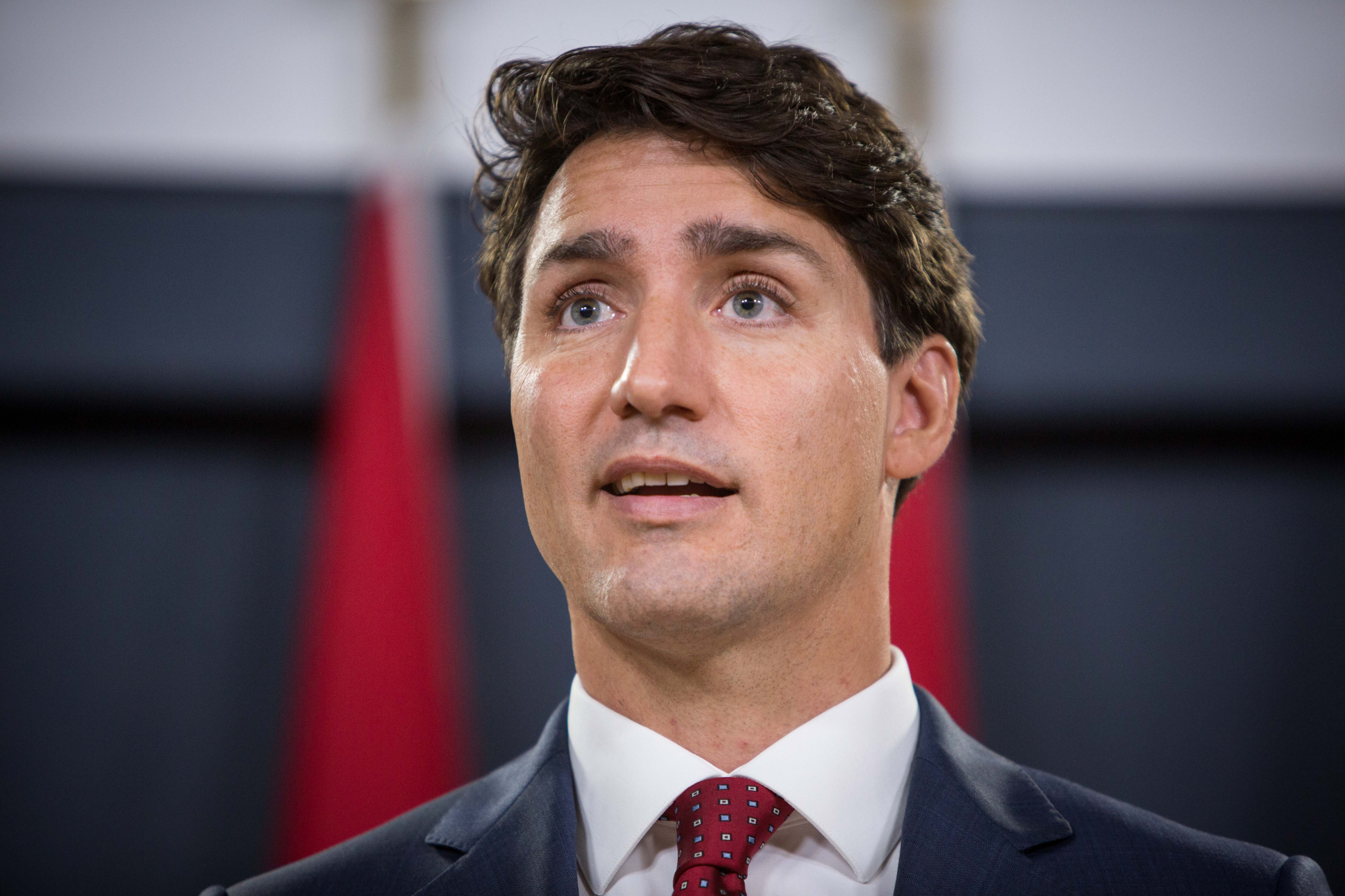 Prime Minister Justin Trudeau said he’s confident the United States will continue to fight climate change, led by its municipal, state and congressional leaders, even if there's "a little less participation” by the Trump administration.

Trudeau made the comments at a news conference in Ottawa on Tuesday morning, reminiscing about how Canada faced similar obstacles in addressing climate change during the years of former prime minister Stephen Harper's government.

The prime minister also said he’s happy to work with premiers on pipelines, following news that New Brunswick wants the federal government to pay for an analysis of pollution associated with the proposed Energy East project — and he said he's plowing ahead with tax reform despite a smaller deficit.

Trudeau’s climate change comments came in response to a question by National Observer on what observations he has made about apparent U.S. waffling in recent days concerning the 2015 Paris Agreement on climate change.

A comment by a European Union official in Montreal indicated the White House was no longer planning to pull out of the global treaty, as U.S. President Donald Trump made clear in June. The Americans, the EU official said, were instead reviewing how to engage with the Paris deal. But the Trump administration later denied those comments.

Trudeau, who said earlier this year that he “impressed upon” German Chancellor Angela Merkel to stand together with the U.S. despite Trump’s rejection of the Paris deal, responded to the question by raising the issue of climate action at the local and regional level — first in Canada and then south of the border.

The prime minister argued that Canadian provinces and municipalities "stepped up" during the Harper government to keep Canada in the fight against climate change.

He could sign the Paris accords “within mere weeks” of his government assuming power, he said, because those governments "showed leadership and innovation around climate change." He specifically cited the coal-power phase-out in Ontario and the establishment of a carbon price in British Columbia.

He then then brought up the American example of local and regional climate action, saying he was confident in U.S. action “even if there seems to be a little less participation by the current U.S. administration.”

“In the conversations I’ve had with Americans — whether they be congressional leaders, governors, or mayors across the United States, or businesses who get the opportunities that come with the challenge of climate change — I’m confident that the United States is still going to be moving forward in the fight against climate change,” he said.

Mayors across major cities in the U.S. and Canada reacted harshly to Trump's June pullout announcement. In the U.S., for example, Chicago Mayor Rahm Emanuel said the city will "push forward" and Los Angeles Mayor Eric Garcetti‏ said that city would "stand up to lead."

Canadian mayors, like Montreal Mayor Denis Coderre, said they too could play a leadership role. U.S., Canadian and other cities are part of C40, which calls itself "a network of the world’s megacities committed to addressing climate change."

The prime minister was meeting with members of the press prior to his departure for New York, where he's scheduled to give a speech at the United Nations General Assembly on Thursday.

Yesterday, he hosted British Prime Minister Theresa May in Ottawa, where the two announced plans to create a new public-private “partnership” on climate change and renewables, although both countries have so far declined to explain what this would mean.

On Friday, he will meet with Ukrainian President Petro Poroshenko in Toronto on the margins of the Invictus Games.

The Trudeau government is also leaving the door open to picking up the tab to examine Energy East pipeline pollution, Trudeau confirmed Tuesday.

The proposal to build the pipeline that would ship up to 1.1 million barrels of oil per day from the prairies to refineries in Quebec and New Brunswick, came to a screeching halt this month after Calgary-based proponent TransCanada Corp asked for a suspension to examine new issues from the regulator.

The National Energy Board announced in August that, for the first time in Canadian history, it wanted to consider the impact of both the air pollution, or greenhouse gas emissions, made in creating and operating it, as well as from the oil being shipped itself, in its pipeline review.

New Brunswick Premier Brian Gallant said in a Sept. 14 letter to Trudeau that he believed the project was now in “jeopardy," Fredericton, N.B. news source The Daily Gleaner reported Monday.

But Gallant said the government could help move the project along again if it agreed to fund the pollution analysis, among other steps, the news outlet reported.

The outlet also said Natural Resources Canada issued a statement saying it had offered to undertake the assessments so that TransCanada didn't have to pay.

Asked if he would support this and why, Trudeau said he was glad to work with provincial governments across the country, including the one in New Brunswick.

“I look forward to continuing to work with all premiers on protecting the environment and growing the economy,” Trudeau said.

The federal government decides whether to approve pipelines based on the “public interest,” he said, “not on a political basis, but the facts of the case.”

“We know that there is a process to go through. We need to make sure we’ve developed public confidence in the process," Trudeau added.

Trudeau also waded into concerns over his controversial tax reforms, saying those will proceed despite clear new evidence the economy is rebounding.

The Finance Department said Tuesday morning that the federal government ran a smaller deficit than the $23 billion that was forecast in the spring budget, ending the 2016-17 fiscal year with an actual deficit of $17.8 billion.

Trudeau called the news a clear sign that the Liberal plan to grow the economy by helping the middle class is working.

Still, the prime minister stood firmly by his government's plan to eliminate tax provisions used by a growing number of small businesses, arguing it is part of the Liberal commitment to increase fairness.

"We are moving forward to make the tax system fairer to stop the system that encourages wealthy Canadians to use private corporations to pay lower tax rates than the middle class," Trudeau said at the Tuesday press conference.

The proposed changes have sparked a revolt by doctors, farmers, small business owners and even some backbench Liberal MPs, who have spoken publicly about the complaints they have been hearing from their constituents.

Finance Minister Bill Morneau released the three-pronged plan in mid-July, including restrictions on the ability of business owners to lower their tax rate by so-called income sprinkling to family members in lower tax brackets, even if those family members do no work for the business.

He also proposed limiting tech use of private corporations to make passive investments in things like stocks or real estate and limiting the ability to convert the regular income of a corporation into capital gains, which are typically taxed at a lower rate.

Trudeau said he will take the feedback into account to make sure the proposed changes target the wealthy, but said he will move ahead.

"How exactly we move forward, what measures are in the legislation going forward is directly impacted and affected by the questions people ask, the concerns brought up," he said.

"We were pleased to see a tremendous amount of response to our consultation paper — people with concerns, some legitimate, some less so — and we are folding them into the proposal that we will put forward, which will make our tax system fairer."

Trudeau also suggested the promised legislation would be narrowly-targeted.

— With files from Joanna Smith, The Canadian Press

The Trudeau administration has not only become the promoter for the expansion of the fossil fuel industry in Canada, but now it wants to be its facilitator. Subsidies to the fossil fuel industry has not been cut as promised at the 2009 G20 Summit, and more money for oil producers and shippers seems to be in the pipeline. Trudeau will be remembered as the "great savior" of the Canadian petroleum industry, stealing the title from a probably frustrated Mr. Harper who sees all his hard work to help the industry being delivered by his successor.