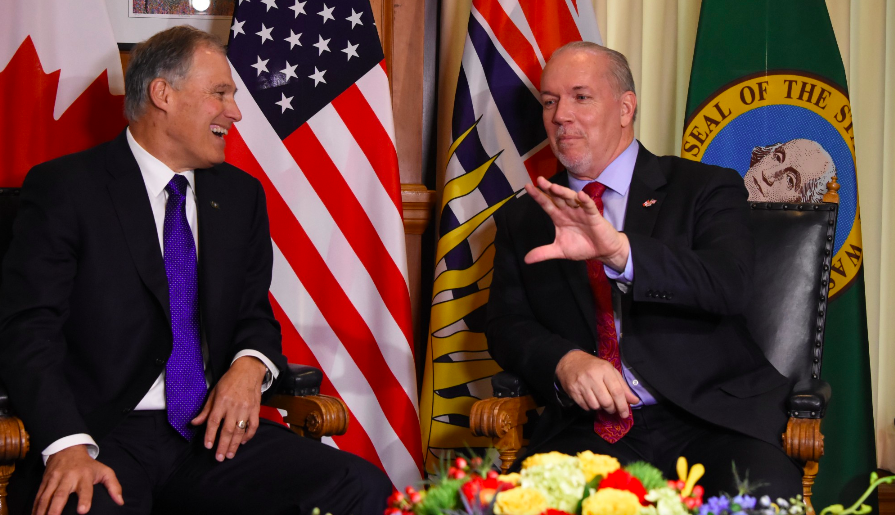 The two neighbouring leaders announced their plans after meeting privately in Victoria, where they discussed trade, climate change and stronger transportation links between the regions, including the possibility of high speed rail between Vancouver and Seattle. Following the meeting, Inslee addressed the B.C. legislature.

A distinct honor and privilege to address the British Columbia Legislative Assembly this morning and to join Premier John Horgan in Victoria. pic.twitter.com/4Me5yeTEZZ

“Today, we reaffirmed our commitment to work closely together and strengthen the enduring and unique partnership between British Columbia and Washington state," they said in a joint statement.

“We recognize our shared responsibility to protect the environment, grow our economies, find new opportunities to expand our flourishing tech and innovation corridor, and create good jobs on both sides of the border."

“Our governments remain committed to joint action and leadership in the fight against climate change, and in the pursuit of strong, sustainable economic development that works for the people of Washington and British Columbia.”

During their meeting, the two leaders discussed work with West Coast partners through initiatives like the Pacific Coast Collaborative, which includes Alaska, B.C., California, Oregon and Washington. The leaders of five jurisdictions signed the Collaborative agreement in 2008 to cooperate on issues such as energy and sustainable resource management.

“Governor Inslee and I are excited about working together to deliver strong, sustainable economic development that works for people on both sides of the border,” said Premier Horgan. “Through initiatives like the Cascadia Innovation Corridor, we’re building stronger bonds between B.C. and Washington state, including better transportation links and the expansion of innovative industries like the job-creating tech sector.”

The meeting comes one week after Inslee and B.C. Environment Minister George Heyman crossed paths at international climate change negotiations in Bonn, Germany. Both Inslee and Heyman reaffirmed their commitments, at the summit, to fight climate change while expressing serious concerns about the plans of Texas energy giant, Kinder Morgan, to build its Trans Mountain expansion oil pipeline project.