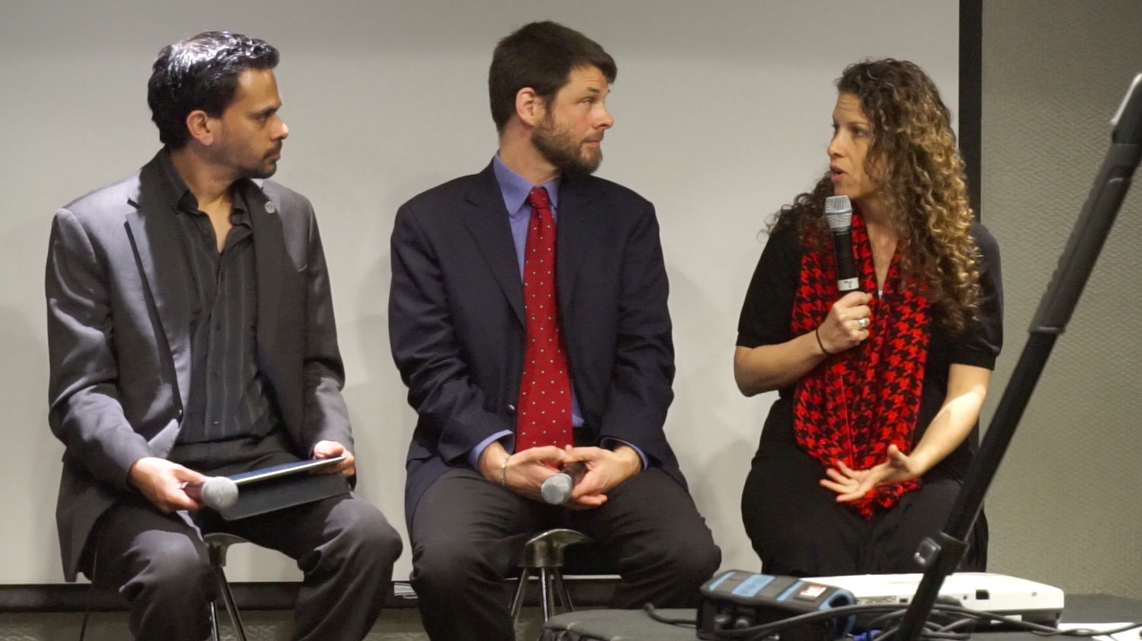 She made the comment during a panel discussion hosted by National Observer that focussed in part on how Facebook and other online companies such as Google and Twitter allowed their networks to be used to spread waves of false information in the 2016 election that brought Donald Trump into the White House.

Facebook launched a tip sheet and video at the event to help Canadians identify and stop the spread of fake news and misinformation. These are the latest pieces of its plan to protect Canadians from misinformation in the next federal election.

The bid to help create "savvy readers and sharers of online news" is in partnership with MediaSmarts, an Ottawa-based nonprofit that teaches critical thinking and analysis of mass media.

The two-year collaboration aimed at improving digital news literacy is part of the social media giant's Canadian election integrity initiative, which was launched ahead of the 2019 federal election.

The panel discussion, aired live on Facebook from Vancouver Thursday, on the role of news literacy in democracy was hosted by Mike De Souza, National Observer managing editor. National Observer is a new member of the Facebook Journalism Project, a collaboration between the social media titan and various news organizations whose goal is to develop new products, help publishers foster informed readership, and improve Facebook's ability to support media outlets.

"The vast majority of false news is motivated by financial gain," said panelist Lynn, social good policy programs director at Facebook's headquarters in Menlo Park, California. "We are willing to take a hit to our profitability to make sure we are investing in this, and that financial gains are not available to people spreading false news."

Facebook admitted last month that it sold about 3,000 ads that were connected to hundreds of misleading accounts or pages between June 2015 and May 2017. These added up to about $100,000 in ad revenues and were affiliated with one another and likely operated out of Russia.

“Our research shows that Canadians are more likely to trust news shared by their family and friends on social media,” said panelist Matthew Johnson, MediaSmarts director of education. “That’s why it’s so important we take a minute to make sure a story is true before we pass it on.”

The new tip sheet and video outline three easy strategies for fighting fake news: check the original source and its record of accuracy; double-check photos and videos using professional fact-checking sites (or search for the subject online next to the word 'hoax'); think before you share.

Questions to ask yourself:

These steps will help stop fake news in its tracks, say MediaSmarts and Facebook, which promoted their partnership in Montreal last month. ​

Fake news is often difficult to spot, he explained, and it's growing increasingly more prominent and deceptive. One website, Johnson said, has been impeccably designed to mirror the U.K. Guardian, and is distinguishable only because it lacks the dot in the 'i' of the Guardian logo.

Lynn said Facebook's mission is to foster "informed communities" online, and to that end, is "working really hard to make Facebook a hostile environment to bad actors" who spread disinformation through the platform.

Editor's note: This article was updated at 6:50 p.m. ET on Dec. 15 to correct the spelling of Facebook's Marcy Scott Lynn.

"These steps will help stop

"These steps will help stop fake news in its tracks, say MediaSmarts and Facebook, which promoted their partnership in Montreal last month."

This is fake news. Now what?

Thanks for your input, Rob. I

Thanks for your input, Rob. I think it's fair to be critical, but the fact that they said this itself is not fake news.

Trusting Facebook is not a clever move. I suspect their idea of "fake news" probably includes anything that criticizes oil companies too much. Or, you know, whoever their ad content comes from. Or whoever buys the information they accumulate about us.

This has always been an issue

This has always been an issue with any media - newspapers, etc. - forever. It's something to keep in mind when reading or listening to or watching anything. It's not just about veracity but also `why is this piece here?'. Who benefits?

Thanks for your note, Purple

Thanks for your note, Purple Library Guy. National Observer has a lot of stories about oil and gas, including the "Price of Oil" series which examined negative health impacts, https://www.nationalobserver.com/special-reports/price-oil and these haven't been flagged as 'fake news' by social media sites.

This is a great article Jenny

This is a great article Jenny. It follows up on what Linda has been saying about fake news. Trump makes a bold and false statement without providing supporting facts. This is Trump's strategy - passive, aggressive, manipulative.

The term "fake news" should

The term "fake news" should not be used as it helps normalize and ligitimize lies and propaganda on an outrageous massive scale. This is criminal fraud perpetrated by those with financial, political and/or ideological motives. Facebook is not stepping up for the greater good here, they are under investigation in many countries for facilitating the dissemination of this propaganda - including over 3000 ads bought by Russia in the last US election, which were targetted at specific users based on algorithms developed by Facebook and using the huge amount of data they have mined on users without their knowledge or consent. This data is sold on to anyone they choose, to be used in whatever way they want and includes name, address, phone number, search history, and other private information. Data mining is THE biggest money maker going and Facebook is being investigated for illegal activity in many couries for this as well as being found guilty in Germany already.

They are only addressing the lies because of a growing global backlash over their complicity, so to say that they are "willing to take a financial hit" to tackle this is a bit gross. This company has gone to extreme lengths to exploit tax loopholes and offshore havens to the extent that the European Commission found they paid 0.005% tax in Norhern Ireland in 2014 and last year they made 12.6 billion Euros in Northern Ireland yet paid just 30 million Euros in tax. This company has 407.3 billion and has consistently exploited it's way to increase it's riches. To leave the full spectrum of their malfeasance out while saying they "are willing to take a hit" to tackle a problem that they themselves facilitate (and make money on) is misleading. Report the facts, not the agenda.

I know otherwise reasonably intelligent people who now use Facebook as a primary source of news. It is really a frightening thought --- and I think they are legion.

Please.
Do not partner with Facebook.
The lessons of their greed are there for all to see.
Don’t make any deals.
To do so will cost freedom an incalculable amount.
The offer by the greed orientated owners of Facebook is nothing but an attempt to hide their complicity.
Do not be an accessory to their crime.