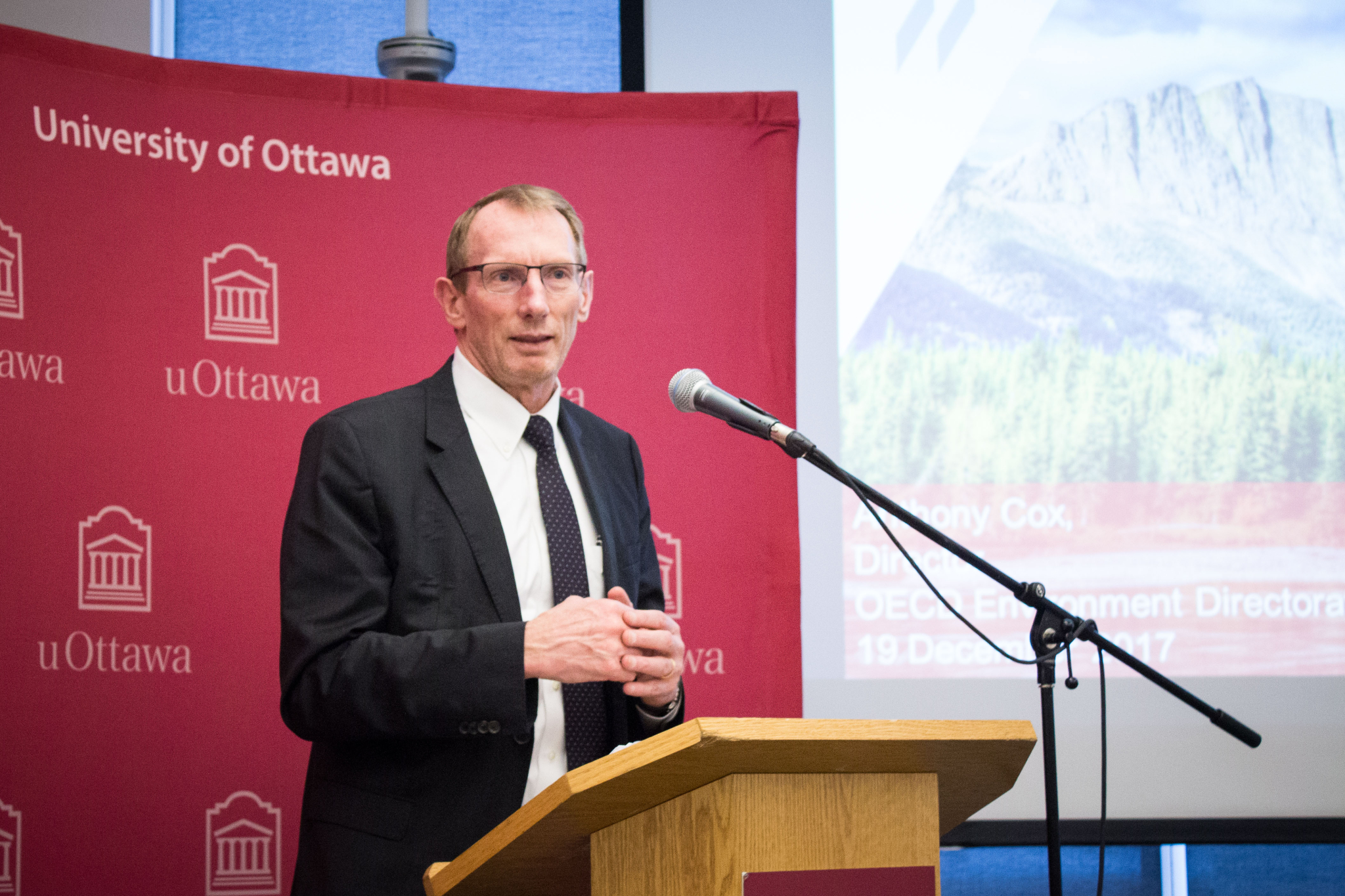 Anthony Cox, the OECD’s environment director, discusses Canada’s environmental performance during a press conference at the University of Ottawa on Tuesday, Dec. 19, 2017. Photo by Trish Audette-Longo
Previous story
Next story

Canada's decentralized approach to putting a price on pollution is overly complex and will be difficult to implement, the Organization for Economic Co-operation and Development says in a new report.

The OECD, an international economic partnership of 35 free market economies, today released the third ever review of Canada's environmental policies and progress, in which it suggests Canada will likely feel pressure to eventually nationalize many parts of the carbon price system.

The report looks at everything from climate change action and adaptation to water pollution, air pollution, garbage dumps and protected lands and waterways since the last review in 2004.

The report covers the period in which Stephen Harper was prime minister of Canada. On Tuesday, an OECD official noted changes since a 2015 election which brought Prime Minister Justin Trudeau to power.

“The change in the federal government in 2015 did herald a very significant step change in environmental policy in Canada. It established very ambitious environmental goals compared to the last review,” said Anthony Cox, the OECD’s environment director, during a press conference at the University of Ottawa.

The OECD praised Canada for making some progress in the last decade and a half, such as reducing emissions from electricity generation.

The report finds Canada lags behind other OECD nations in the amount of garbage that ends up in landfills and is the second-most carbon and energy-intensive economy within the OECD, after Estonia.

For every US$1,000 in GDP created in Canada, this country uses 62 per cent more energy and produces 44 per cent more carbon emissions than the OECD average.

The OECD report calls the Pan-Canadian Framework on Clean Growth and Climate Change a "well thought-out strategy" and the national carbon price included within it is critical to Canada's ability to cut its emissions enough to meet its international obligations.

However the OECD has concerns with allowing every province to decide how to implement a minimum price on carbon emissions, which is to start at $10 a tonne in 2018 and rise to $50 a tonne by 2022.

"Practical implementation will, however, be a huge challenge," the report says of the system.

Prime Minister Justin Trudeau said in October 2016 every province would have to have a minimum price on carbon by 2018, but each is being allowed to implement their own system as long as it meets federal benchmarks. Provinces that don't will have a federal carbon tax imposed on them and the revenues returned to the province, likely in the form of direct grants to individuals and businesses.

Environment Minister Catherine McKenna said last week provinces will have until the end of 2018 to submit their plans for Ottawa to decide whether it has to impose the national price plan or not.

Six provinces have either a carbon tax or cap-and-trade system in place or planned for 2018.

New Brunswick intends to use its existing gas tax as a de facto carbon price, while Saskatchewan has no intention of introducing a price on carbon and the government says it will sue if Ottawa tries to impose one.

Prince Edward Island and Newfoundland are still working on their plans to be released in 2018.

The OECD says a lot of work is going to be required to figure out how to measure provincial cap-and-trade systems against the federal benchmarks and notes the existing provincial plans have many variants, including price and what products the price is charged on. It expects those variations "may eventually create frictions and pressures" for the different provincial systems to merge at least to some degree.

It also wants Canada to go beyond the 2022 $50 a tonne commitment soon to reduce uncertainty for investors and also to establish an accountability mechanism that can better compare and track provincial systems to each other. Canada should also ensure exemptions to give energy-intensive industries more time to adapt should be temporary.

The OECD notes overall Canada has among the lowest environmental tax loads, ahead of only the United States and Mexico as a share of GDP. That's largely because Canada's fuel taxes are low, heating fuels are rarely taxed at all and excise taxes on inefficient vehicles don't apply to pick-up trucks, which are the best-selling vehicles in the country with the most emissions among passenger vehicles.

Emissions fall across sectors, except in transport, oil and gas

Though the aim of the review is to hold Canada accountable to its own climate goals, Cox noted Canada’s rate of emissions reduction has been lower than countries across the OECD.

He also noted the review found a drop in emissions across all sectors, except oil and gas and transport.

“Current projections indicate a 50 per cent increase in Canadian oil production between now and 2040,” Cox said. “And without a drastic decrease in the emissions intensity of the oilsands industry, this increase in production is going to, or could, seriously risk the achievement of Canada’s climate mitigation targets.”

Nathalie Girouard, head of the OECD’s environmental performance and information division, noted there are also unknown factors at play, including external demand for Canada’s oil and, for Alberta particularly, the pressures of an “international context which is very difficult, with the neighbour going in another direction, the opening of NAFTA, there are a lot of headwinds.”

Cox expressed hope for the future despite the current U.S. administration’s position on climate change, however.

“The decision by the United States to withdraw from the current agreement is unfortunate. I think we all hope that they reconsider this at some stage, and I’m sure the door is open for them to decide to rejoin the Paris Agreement at some point in the future,” he said.

“We’re seeing a doubling down of effort on climate mitigation, at the city level, at the state level, and I think this kind of momentum will mean that the United States as a nation will continue to reduce its greenhouse gas emissions. I think it’s clear that the market dynamics have changed a lot … the attractiveness of coal has shifted dramatically with the rise of renewable energy and the decline of the cost of renewable energy. There’s a lot of market dynamics and some momentum in the market to keep the shift going to increases in renewable energy.”

Emissions are important, of

Emissions are important, of course. What is often forgotten, however, is the overall effects of drilling, especially high pressure, multi-stage horizontal hydraulic fracturing (fracking) on the environment as a whole. Not only air, but water, soil and human and animal health are negatively affected by this devastating practice. Air emissions could indeed be limited or eliminated, but no one has developed a way of protecting our water and soil from the massive contamination involved in the fracking process. It is impossible to keep contaminated water (on average, 5,000,000 gallons per "frack") from leaking into the aquifers. The substructure is simply too complex, and the cement which is supposed to protect is doomed to fail over time, if not immediately. Let's not lose sight of the real threat to our children's future, as well as present public health and our besieged agricultural industry, which is posed by allowing continuation of this non-starter of a process, against the law in many jurisdictions for very good reason.

I think the bitumen should be

I think the bitumen should be left in the hole in Northern Alberta where god put it to keep it away from people who care less about the environment than Albertans.