By Candis Callison & Mary-Lynn Young in Analysis, Politics | February 16th 2018
#51 of 107 articles from the Special Report: State of Journalism 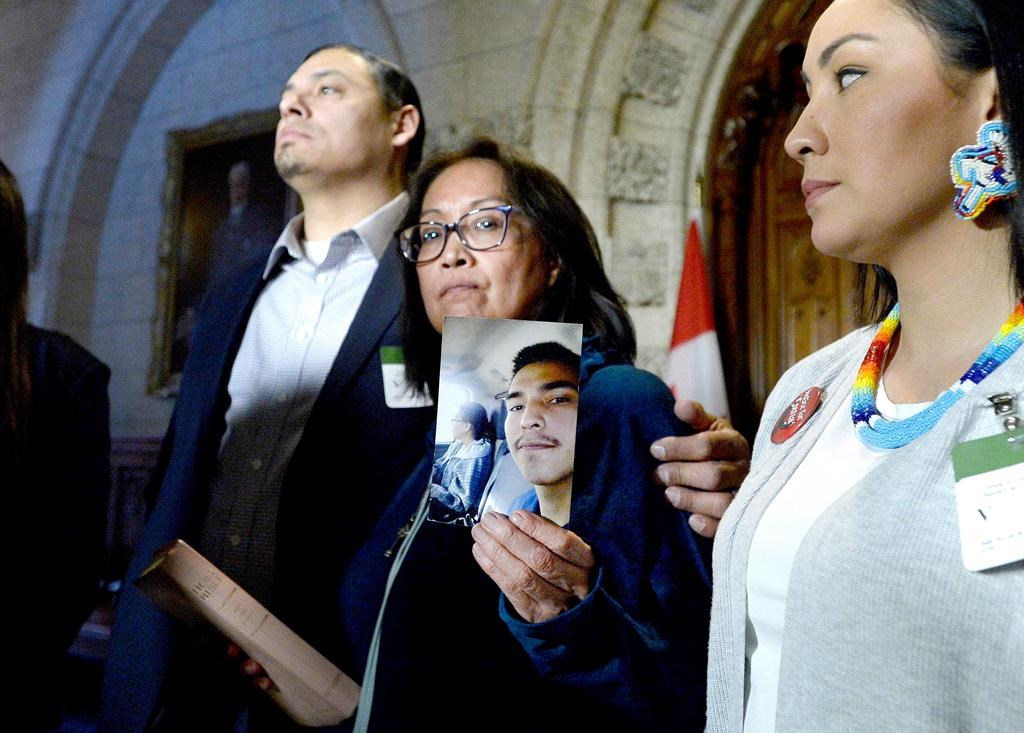 Debbie Baptiste holds up a photo of her son Colten Boushie, as the family spoke to reporters in the Foyer of the House of Commons after a day of meetings on Parliament Hill, in Ottawa on Tuesday, Feb. 13, 2018. THE CANADIAN PRESS/Justin Tang
Previous story

What can the events surrounding Colten Boushie’s death, the trial verdict and its media coverage tell us about the role of journalism and journalists in relation to Indigenous concerns in Canada? All too much.

There is a well-documented history of Canadian newspapers’ complicity with colonialism and state-sponsored violence against Indigenous people from pre-Confederation forward. And despite the last several decades of front-page coverage that includes the uprising in Oka to Idle No More and the Truth and Reconciliation Commission, mainstream media are only doing marginally better than they have before.

Instead, Indigenous scholars, activists and community members are largely doing the important work of situating Colten Boushie’s life and death within the colonial context, answering not if race was a factor, but how and why it matters.

For those countering more than a century of journalism in Canada, the work requires looking at news media’s embedded and interwoven relationship with colonialism. In their book, Seeing Red: A History of Natives in Canadian Newspapers, Carmen Robertson and Mark Cronlund Anderson argue that Canadian media have — since before Confederation —continually reproduced stereotypes in which Indigenous people are found wanting morally, physically, mentally, historically.

This “othering” helps to “promote a nation,” an “imagined community” of Canada, in Benedict Anderson’s terms, in which Indigenous people are seen as on the margins and the brutality of settler colonialism is seen as natural and normal.

Indigenous journalists and public intellectuals do this work on social media, where trolls attack freelancers and not-for-profit media outlets, and the legal and institutional supports afforded to mainstream media are limited or unavailable.

This work entails articulating over and over the impact of white supremacy, colonialism and the indifference of Canadians about Indigenous peoples, and the enduring injustices and structural inequities they experience.

Some of these issues include: Missing and murdered women, youth suicide, poverty, lack of safe drinking water, inter-generational trauma from residential schools, lack of access to high school education in northern communities — a right of all other youth in this country — and the resilience required in the face of these and many other injustices.

With all of the rhetoric around journalism as a public service, it is a wonder that journalists haven’t produced more reporting and analysis that might work towards transforming the systems that continue to be stacked against Indigenous people, including youth like Colten Boushie.

Despite a surge of reporting on Indigenous issues over the past five years as a result of both the Truth and Reconciliation Commission and the Idle No More movement, as well as the broad public interest in Indigenous issues as newsworthy, mainstream media are often late to coverage or they don’t show up at all.

Recent coverage of the trials related to the killing of Tina Fontaine and Colten Boushie illustrate exactly how problematic mainstream media can be when they do show up. That’s in part because Canadian journalists are largely abdicating their role in both understanding and articulating for their audiences “what happened” about an event involving Indigenous concerns in a way that accounts for colonialism and structural disparities.

Common critiques of media inlude: Persistent racialized stereotypes, lack of Indigenous voices and experts, an over-emphasis of conflict between two parties instead of multiple parties and perspectives, a lack of complexity and historical context and ignoring fly-over or rural communities.

Even though many Canadians are finally beginning to recognize the colonization and genocide that undergirds the foundation of this country, it might surprise you to know that there is only one full-time Indigenous journalist at a national Canadian newspaper in 2018: Tanya Talaga at the Toronto Star, the author of Seven Fallen Feathers.

There are more Indigenous journalists in public broadcasting in Canada, which is in part a result of the specific regulatory environment that requires greater attention to issues of equity and inclusion. APTN provides an important platform as part of its mission and mandate.

Journalism education isn’t much better than Canadian media institutions. One of us is among the few Indigenous professors at a school of journalism in Canada. Journalism schools also rely on working journalists such as the CBC’s Duncan McCue to come in as adjunct professors to teach students how to report in Indigenous communities.

In addition, most journalism schools in Canada are often in separate units from their communications school cousins, which may result in journalism students having less access to important critiques of structural power relations and inequities — and how media representations can further those inequities.

This is not a surprise given the many studies that have reported on the persistent whiteness of Canadian journalism:

These gaps are particularly problematic because of both the long history of getting it wrong on Indigenous people and the implications this has for rights, land, shared histories and the many systems that govern everyday modern life. Not only that, Indigenous communities are a vital aspect of Canada’s media audiences, and they are paying attention as the outcry over recent media coverage demonstrates.

Digital media has played a role in enabling talking back through platforms like Twitter and independent Indigenous media. These media counter news agendas, engage with audiences and encourage a transformation of perspective that allow us to see various colonial histories and varied Indigenous perspectives.

However, even as strides have been made to represent Indigenous concerns, journalism must do better.

Editor's note: This article first appeared on The Conversation Canada.

I've been reading the

I've been reading the articles in National Observer on indigenous peoples activity in BC and the recent Stanley trial. I agree we must right the wrongs committed over the past years. One part that causes me concern as a Canadian and father is "What are the indigenous people doing to educate their children and keep them out of trouble?"

The articles on the Tl'etinqox First Nations clearly shows how positive action on their part is getting control over their destiny returned to their hands. All positive. This opens a question I would like to see answered.

In the Stanley trial reporting the Sun referenced how many indigenous members had been selected for the Jury pool. It also indicated many made loud comments on their bias against Stanley and if their name was pulled would be refused because of this.
As well reference is made to the fact Defense Lawyers where refusing any indigenous names pulled as jurors.

Is the National Observer in a position to give a complete report on the Stanley trial?

Is there a report available on the steps taken to help indigenous youth stay out of trouble?

A article on both the above would provide us a clearer picture of what is actually going on instead of the one sided reporting in the media on, not only, indigenous people but all members of Canadian Society.

Having been so foolhardy as

Having been so foolhardy as to comment on a Tyee article about the trial, I came away saddened by the realization that racism is alive and well in Canada. How can we set rules of engagement, for all Canadians that include the following: 1. It is ignorant to judge the character or motives of people you haven't met, and do not have any kind of certain information or knowledge concerning.
2. It is ignorant to make arguments about Canadian law or court procedures without having any knowledge of same.
3. It is racist to opine on the behavior of persons involved in a case, ie: Stanley was terrified so is justified; Bouchie was drunk so got what he deserved.
4. It is likely racist to verbally attack other commentators who express a contrary opinion to yours...particularly with name calling and invective.

I couldn't believe how many people know exactly what had happened and were intent on justifying a verdict that couldn't help be problematic. Whatever Stanley felt, however accidental the shooting might have been...a gun killed a young man sitting in a car likely so drunk as to be no danger to anyone but himself.

And none of that mattered to the commentators who were on Stanley's 'side'.

Many even brought up the red herring that the natives had tried to steal something at another farm...not minding there was no way Stanley could have known that when he fired the shot.

Racism is an illness. A kind of fear hatred. And it reveals itself most clearly when it argues for irrational conclusions....and does so violently.

I'm afraid, if the Tyee article was any indications, that it is alive and well in our country. Our indigenous people have suffered it for 150 years...the Bouchie trial and its aftermath have allowed me to experience vicariously, what they go through daily.

It has to stop.

By The Canadian Press in News, Politics | February 15th 2018

Gerald Stanley and the fear of the 'Indian'