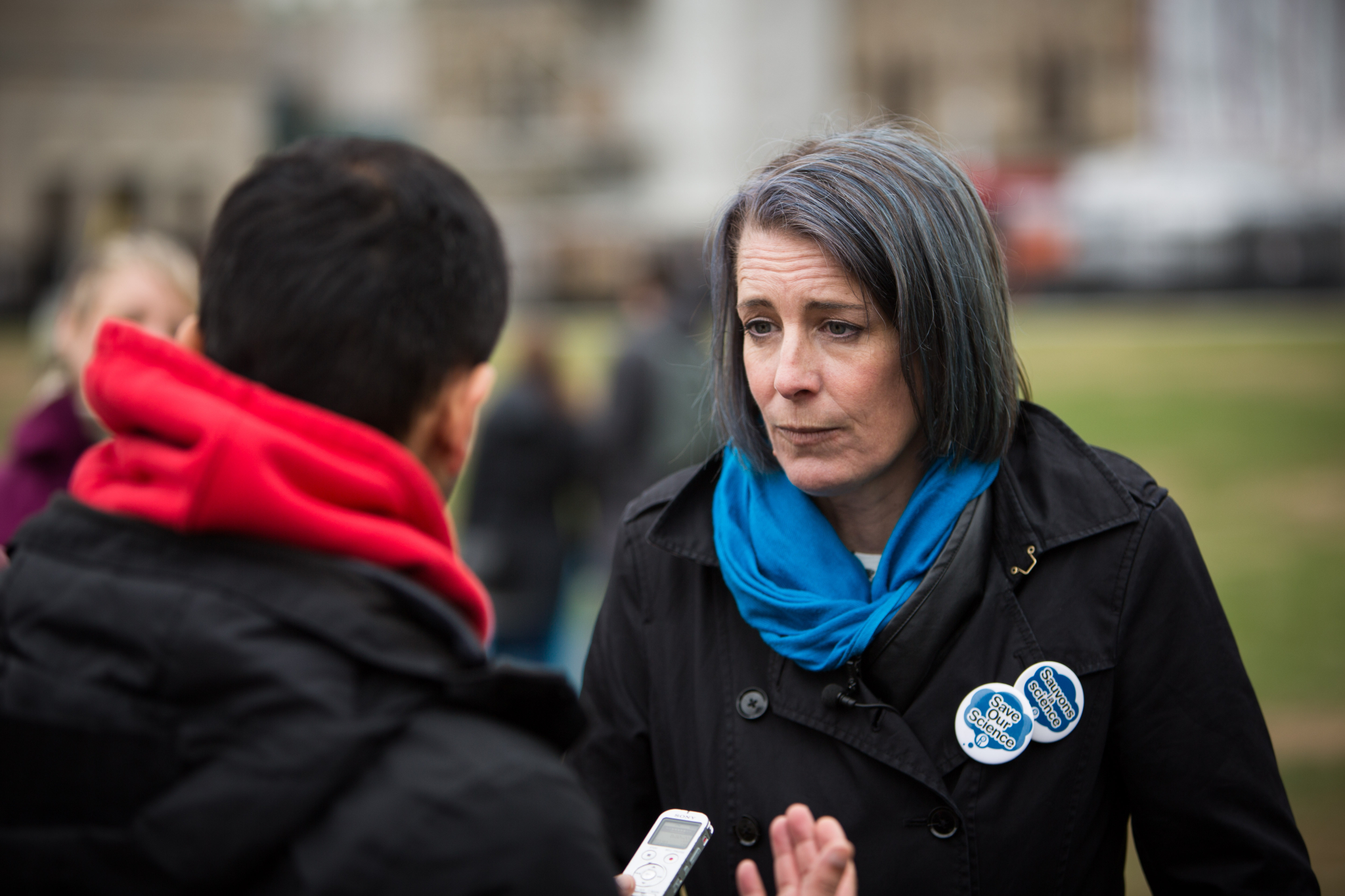 Debi Daviau, president of the Professional Institute of the Public Service of Canada, answers questions from National Observer's Mike De Souza, after a March for Science rally on Parliament Hill in Ottawa on April 22, 2017. File photo by Alex Tétreault
Previous story
Next story

Despite some improvements, senior public servants are "clinging" to outdated rules promoted by the Harper government and continuing to muzzle federal scientists, says a new survey released on Wednesday.

The poll, commissioned for the Professional Institute of the Public Service of Canada (PIPSC) — a union that represents government professionals and scientists, found that 53 per cent of respondents felt they couldn't speak freely to the media. This is an improvement from 2013, when former prime minister Stephen Harper's government was in power and more than 90 per cent felt they couldn't speak freely.

The muzzling of scientists was a frequent complaint about the federal government during the Harper years, particularly on sensitive political topics such as climate change and rising pollution from Alberta's oilsands industry. The federal information commissioner launched an investigation on the issue and Prime Minister Justin Trudeau's Liberals swept to power in the 2015 election promising to end the muzzling of scientists.

Once in government, the Liberals announced that scientists were unmuzzled, cancelling the communications policies of the Harper government, while agreeing to add the right to speak freely into collective agreements. The government has also named a chief science advisor, Mona Nemer. Her job is to ensure federal science is available to the public, that scientists can speak freely about their work, and that government decisions are based on evidence.

'Things continue as if there had never been an election'

The new survey results were released in a PIPSC report called Defrosting Public Science, a follow up to a 2013 report called The Big Chill.

While the numbers show progress, respondents said that many of their managers haven't fully accepted and implemented evidence-based decision making and better practices.

"At the mid-management level, things continue as if there had never been an election," said one respondent in the survey, included in the new PIPSC report.

Another respondent said they had seen no change in restrictions to sharing the government's science findings.

"There is still a cadre of managers who were very comfortable with the tight rules under the Harper government and are clinging to them," said one respondent in the survey of federal scientists and professionals. #bigchill #cdnpoli #cdnfoi

"There is still a cadre of managers who were very comfortable with the tight rules under the Harper government and are clinging to them," said that respondent.

Debi Daviau, president of the PIPSC union, also said in the report that while the government changed its communications policy, "nobody seemed to know about it" in the initial months after the change in government.

The report's findings are being released as the Trudeau government faces some criticism from scientists over whether its decision to approve Kinder Morgan's Trans Mountain oil pipeline expansion project was based on the best-available evidence.

The survey found that 40 per cent of respondents believed that political interference remained an obstacle to use of scientific evidence in important government decisions.

"There is too much politics affecting decision making and research direction," said another respondent.

The survey, conducted by Environics Research between May 29 and June 27, 2017, surveyed 3,025 members of the union and is considered accurate within 1.8 percentage points, 19 times out of 20.

"The Trudeau government has shown itself willing to unmuzzle federal scientists, make science more available to the public, and promote scientific evidence in its decision-making," said the PIPSC report. "At a time when these values are under threat in the United States, it is more important than ever that Canada lead by example and promote federal science in the public interest."

Federal Science Minister Kirsty Duncan told National Observer in an emailed statement that the Trudeau government was committed to allowing scientists to speak freely "after ten years of muzzling under the Harper government."

“As the new report points out, our government followed through on our promise to immediately unmuzzle federal scientists," Duncan said in the statement. "We included the right for scientists to speak freely in the latest collective agreements and we reinstated Canada’s Chief Science Advisor after the position was cut by the former government."

All of the numbers from the survey indicate improvements, except for a question about protection for whistleblowers. In 2013, 88 per cent of respondents agreed that the public could be "better served" if the federal government strengthened protections for whistleblowers in the public service. In 2017, 89 per cent of respondents agreed with this statement.

“We know that culture change takes time," Duncan added in her statement. "But I am making every effort to meet with scientists and to encourage them to discuss their important work with each other and with Canadians. Canadians can be confident that I will continue to work with the research community to ensure openness and transparency, now and in the future.”

Among some of the other survey findings:

"The message seems clear: undoing 10 years of damage to federal science will take more than a change of government, hopeful mandate letters or even collective agreement provisions protecting the right of federal scientists to speak," the PIPSC report said. "Nor should the impact of funding cuts over many years be overlooked... Real progress will require more deliberate, concrete action by both government and the public service."

Perhaps these senior bureaucrats have distorted and/or hidden the truth for so long, they don't know what is real anymore.
Veritas Vincit.

We really don't have time for

We really don't have time for slow cultural change. The need for the public to understand what is happening to our country and our world has never been stronger. Our survival depends on public understanding of the issues, and pressure on politicians to make decisions which will support our survival as a species.

The refusal of middle

The refusal of middle management in the public service to cooperate with government is an evergreen issue, and an international one. They are, in practice, a very powerful group that can impede change just by using passive resistance. In my experience, it seldom has much to do with personal political beliefs, and a lot to do with comfort zones. In a field that is trained to operate according to sometimes arcane rules, there is little ambition to truly serve the public. It pays, instead, to keep the head down and not rock any boats. The culture rewards conformity and conservative thinking. Cultural change takes a long time if left to itself, but it's not impossible to speed the process up.

Another excellent piece in

Another excellent piece in the National Observer. Share this widely.

The public really can't afford to wait while a cohort of 'comfortable' civil servants die or take retire. If as one commentator says, the bureaucracy leans toward conservative conformity, where 'keeping your head down' is what pays, than that cozy nest of pencil pushers needs to be shook up.

Perhaps I'm paranoid, but I can't help thinking its not the culture...its the economy, stupid. Yes. Conforming, scared and lazy people want to keep doing what they'be been doing because doing that isn't much doing at all. But the climate isn't going to play nicey nicey, with them or us. And I do believe there's more than a whiff of dirty oil and fracked gas motivating some of these sloths.

We need a law that protects whistle blowers...absolutely.

And we need an Economics based on real scientific evidence, and the willingness to factor in the ecosphere, and the subsidies, and the up stream and down stream costs of the old oily 'business as usual' model. The public needs committed scientists doing real research to help us build such a new economy.

That's a big part of the muzzle problem. Too many people in high places would rather hear talking points than develop the attention span to understand science and what it is really saying about fossil fuels and global warming.

Apparently the weird “scientific” evidence for the pipeline and the environment going together, constantly parroted by Trudeau and McKenna, came from Harper’s cadre of sycophants.
Come on! Wake up! This is a climate crises and your dithering, political sludge is last century.
Admit you can’t do both and meet our targets and get on with the real work!