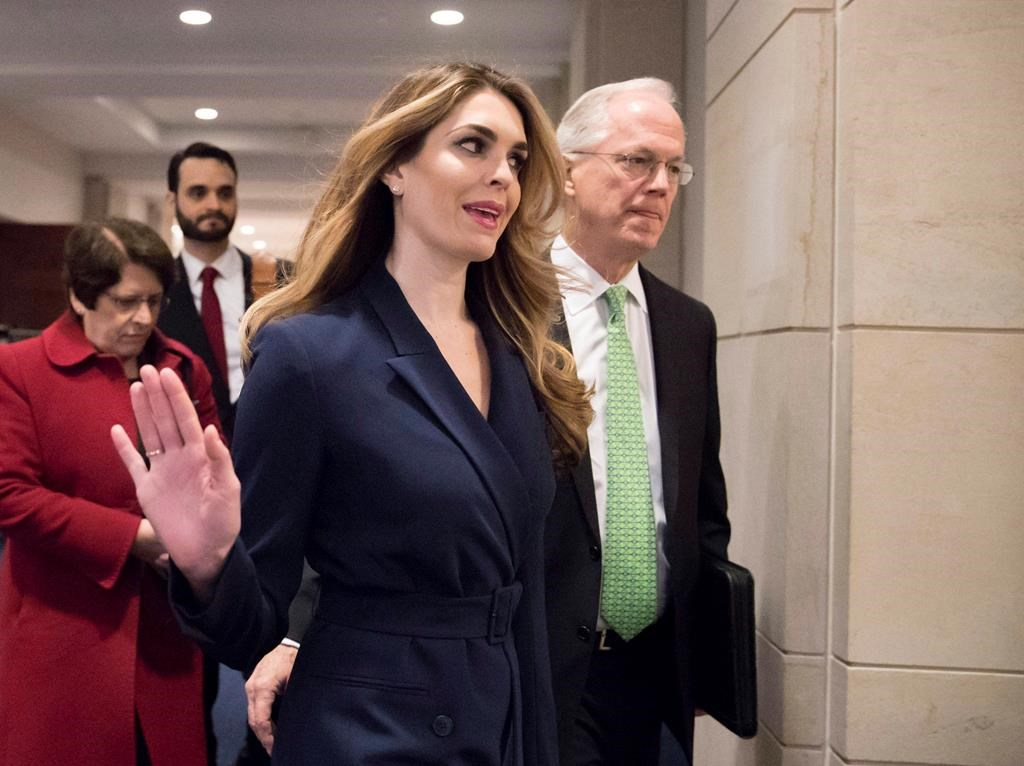 White House Communications Director Hope Hicks, one of President Trump's closest aides and advisers, arrives to meet behind closed doors with the House Intelligence Committee, at the Capitol in Washington, on Feb. 27, 2018. Photo by The Associated Press
Previous story
Next story

The day began with President Donald Trump publicly belittling his attorney general, and ended with him losing his communications director amid growing indications of the turmoil from a criminal probe seeping through his administration.

Just one of several news developments Wednesday was a report from NBC that Robert Mueller's probe has begun interrogating witnesses about Trump, and whether he knew in advance about Russian hacking of Democrats' emails, and whether he helped with the strategy of their publication.

The intrigue was stoked with the release of a memo by a congressional committee over the weekend: the memo written by Democrats on the House intelligence committee alleged Russians tipped off contacts on the Trump campaign in advance about the release of stolen emails.

The president is publicly demanding that his officials fight back.

On Wednesday, he used Twitter to disparage Attorney General Jeff Sessions, bemoaning the overly meek response to what he argues is the real scandal: an abusive use of surveillance by law enforcement which he said helped start the whole Russia scandal.

Trump blasted the attorney general for launching an internal investigation via his department's inspector general — instead of immediately going the criminal route.

"Will take forever," Trump tweeted. "Why not use Justice Department lawyers? DISGRACEFUL!"

The tweet was unusual enough to draw criticism on Fox News. Afternoon show host Neil Cavuto applauded the president for showing leadership in a meeting on gun control, but criticized him for showing the opposite of leadership in his treatment of Sessions.

Fox's legal analyst urged the president not to fire Sessions. He said Sessions might quit out of embarrassment — but he warned that any move to force him out against his will, on a sensitive criminal matter so close to the president, would uncork a major crisis.

"(It would be) another impetus for impeachment,'' said Andrew Napolitano. "An explosion (Trump) doesn’t need... It would pry loose moderate Republicans (who would) start talking to Democrats (about)... 'What are we going to do about this?'"

That was far from the only scandal-related personnel problem Wednesday.

Trump's own son-in-law, Jared Kushner, has just had his access to sensitive intelligence information curtailed. A Washington Post piece said Kushner's unreported contacts with certain foreign government officials had raised concerns, and that foreign governments sought to use the debt of Kushner's family business against him.

In addition, Trump's deputy campaign manager Rick Gates, and foreign policy adviser George Papadopoulos, have both pleaded guilty to crimes in the Mueller probe and are now co-operating with the FBI.

Then, late Wednesday, came the news about Hope Hicks.

The White House said the surprise news of her departure had nothing to do with the Russia probe. It said her departure had been planned for a while. But it came as a shock — Hicks was a top presidential loyalist, and a Trump family friend.

It arrived one day after Hicks testified about the Russia affair, in an hours-long appearance before the House intelligence committee. One purported leaked detail from her testimony that appeared in press reports said Hicks admitted that she felt the need, sometimes, to lie for the president.

She reportedly added that these lies were never about serious, or legal, issues. She had been part of a critical strategy session where the White House decided to draft a misleading statement about a 2016 meeting between Trump's entourage and Russians.

A White House statement said Hicks will leave within the next few weeks.

"There are no words to adequately express my gratitude to President Trump,'' Hicks said in a statement.

''I wish the president and his administration the very best as he continues to lead our country."

She's not even the only senior aide announcing her departure this week. A top White House communications aide who worked especially closely with Kushner and Ivanka Trump is also leaving.

Aerial bombardment: The pro-Trump campaign for hearts and minds in Russia affair