I’m happy to have this conversation (again), but why are women the only ones having it? 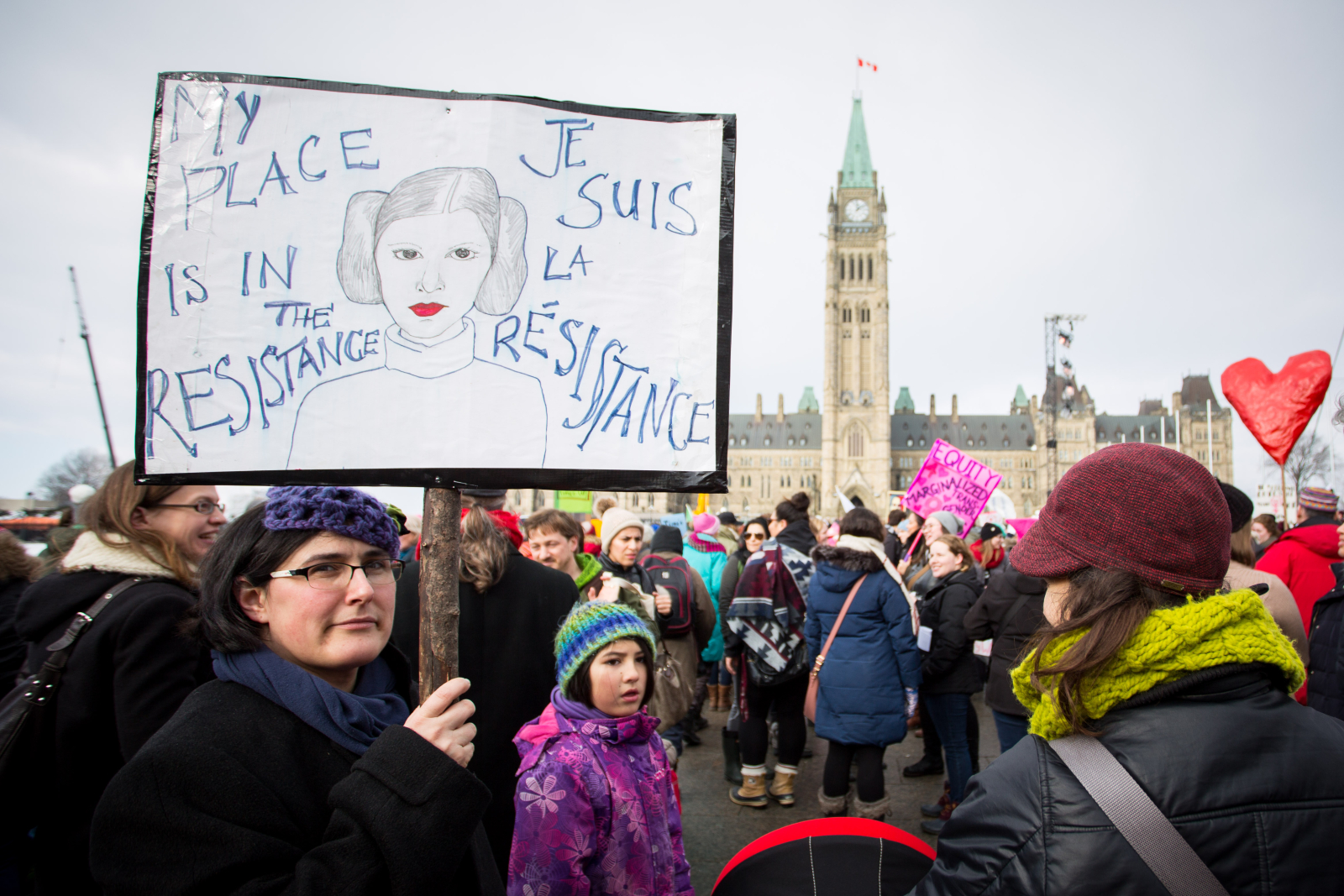 Once again, International Women’s Day rolled around this week and, like clockwork, the usual two questions that always – without exception – popped up on my social media feed: “Why isn’t there an International Men’s Day?” and “Why is this day still relevant?”

I’ll go right ahead and save those whine-posting about International Men’s Day further trouble – it’s on November 19. Now, regarding the second question, I’ll just let the facts speak for themselves.

Questioning the relevance of International Women’s Day is to, essentially, imply that you are questioning the relevance of feminism and the continued struggle for women’s rights. Questioning the need for feminism would somehow require selective observational skills, where we purposely choose to ignore the continued pay gap, the clear lack of women in executive and leadership positions, the overwhelming challenges of combining motherhood and a career, a pervasive rape culture, the constant need to blame and question the victim, and the daily perpetration of impossible standards of female beauty.

Internationally, one doesn’t even have to go that far to see how much progress still needs to be made. Donald Trump’s presidency and the rise of conservatism in the U.S. – religious or otherwise – have allowed the kind of legislative attack on women’s reproductive freedoms that continues to leave me stunned and worried.

A popular adage states that "the most serious threat to democracy is the notion that it has already been achieved." Replace the word "democracy" with "equality" and you'll see the danger in this type of thinking. Just because things are better, does not mean they are great. There’s still a lot more work to do. Yet, for some odd reason, I continue to see far too many people resistant to that simple and very uncontroversial fact.

If anything, the #MeToo and #TimesUp revelations should have demonstrated beyond a shadow of a doubt just how pervasive and systemic sexism and sexual abuse against women are. And yet, time and time again, I see an annoyed and entitled (sometimes, even vicious) pushback online against the mere mention of women’s issues and feminism. All too often, when I share a link to a study demonstrating that violence against women is a reality, I get inundated with random comments from men (and, sadly, even some women) who a) doubt the legitimacy of the studies, b) accuse women of playing victims, and c) bring up violence against men as also deserving of attention.

Just once I’d like to see the vital and very important issue of violence against men addressed on its own and notconveniently used to downplay, deflect and undermine issues affecting women. Just once I’d like to discuss toxic masculinity and rape culture without some men immediately seeing the terms as highly charged blanket statements that seek to vilify all men for all sins. We get it, guys… We know it’s #NotAllMen.

But can we talk about the predators and the sexists without simultaneously having to appease and soothe those who feel unnecessarily targeted by the actions of others? Or, you know, you can also jump in and hold them accountable too. That could be helpful, as well.

I guess what I’m trying to say is that I really welcome the day when half the population will consider the grievances of the other half as something they should seriously be interested in; not just something they get to react to or debate when they feel like it.

This year Chatelaine’s annual survey decided to tackle men, masculinity, careers, sex, parenthood, relationships, self-image, and what it means to be a man in 2018. Chatelaine partnered with Abacus Data to survey 1,000 Canadian men between 25 and 65 from across the country and the results are revealing and worth discussing. #TheManSurvey, as it was dubbed and discussed on social media, is divided into four sections: Men and Manliness, Sex and Relationships, Work and Home, and Methodology.

Some findings left me hopeful that progress is slowly being made, some left me scratching my head, others left me frustrated beyond belief, and some were as predictable as could be. All are worth looking at and discussing at length. If nothing else, as a platform for additional conversations to be had. As uncomfortable, repetitive, and angry as these conversations sometimes are, we need to be having them.

Some of the revelations that jumped out at me the most: A whopping 51 per cent of men believe that growing up “being a man” meant “physically tough” and for 48 per cent it meant “being the breadwinner.” Happily, 59 per cent of men, as adults, now think that “being kind” is a big part of being a man, followed by 50 per cent believing it’s “emotional intelligence.”

It’s surreal to me that 51 per cent of men believe they have not benefited professionally from being a man. Or that 25 per cent of men “feel nothing” regarding the #MeToo movement. Is the conversation about systemic sexual harassment boring you, guys? How can you be hearing story after harrowing story of abuse of power and feel nothing about it?

Finally, how absurd that 82 per cent of men say they believe in gender equality, yet only 18 per cent would call themselves a “feminist.” Feminism isn’t a label, a confining box, or a list of one-dimensional caricatures people drag out to scare the children with. It’s a definition in the dictionary that isn’t up for debate. If you believe in equal rights for men and women, you’re a feminist whether you like the term or not.

The one that made me bitterly laugh out loud (even though I’m not a parent so it did not affect me personally) is the fact that 64 per cent of working dads responded that being a parent hasn’t impacted their career. To add insult to injury to any working mom’s juggling routine and the guilt trips they sometimes endure from management and all the “leaning in” they’re expected to do, 10 per cent of men said that parenthood, in fact, helped their career. While motherhood is considered a liability for working moms, who join the lovely “work-balance questions” club, men are almost never affected. In fact, they are often rewarded with preferential treatment because male-dominated management sees them as the traditional breadwinner who needs support bringing home the bacon.

A whopping 82 per cent of men said that they’d never pushed a woman to go farther sexually than she wanted to. If that were true, fellas, the #MeToo movement would not be so omni-present right now. Can we use the movement as a jump-off point for some serious reflection, please?

Toxic masculinity is real — and it's hurting men (and women)

Here’s what I do know based on my interactions with men who react to my opinion pieces on women’s issues. There is an undeniable emotional toll that toxic masculinity exacts from them. Today’s rapidly changing world has made it a difficult time to be a man. Wading into conflicting messages, and different – often, contradictory – notions of what it means to be a successful male in this world, I think that many are struggling. I get it and I empathize with them. But women should no longer be willing to do the grunt work.

I ask you, why did a women’s magazine have to do all the heavy lifting once again? I want a magazine that’s widely read by men to undertake such a survey on manhood. I want these issues to be of interest to all men and women; not just women doing the emotional labour once again.

I’m grateful to the men who get it. To the men in media who immediately read the results and jump-started an important conversation on Twitter, urging other men (and mainstream media) to join the conversation. As Buzzfeed news editor Elamin Abdelmahmoud tweeted, “Magazines with predominantly women readership seem to be doing most of the heavy lifting these days in terms of starting these conversations/giving them the space they deserve.”

These types of surveys and this kind of data needs to be published outside of traditional women’s magazines, so men get to read them directly as addressed to them, and not via a caring woman in their lives transmitting the information and, once again, incurring the emotional labour of educating them.

This isn’t a zero-sum game. It's not a gender war if we're all essentially part of the same team.The sooner we all understand what’s at stake, the sooner we can all work together – men and women – to create a more equitable world that will benefit us all on a social, political, and economic level. And while there are obvious and indisputable tangible benefits to equality, I shouldn’t have to convince someone of any of them in order for them to be interested and invested in half the world’s well-being and dignity.

You should already care on your own.