By Trish Audette-Longo | Analysis, Politics | March 16th 2018
#57 of 114 articles from the Special Report: State of Journalism 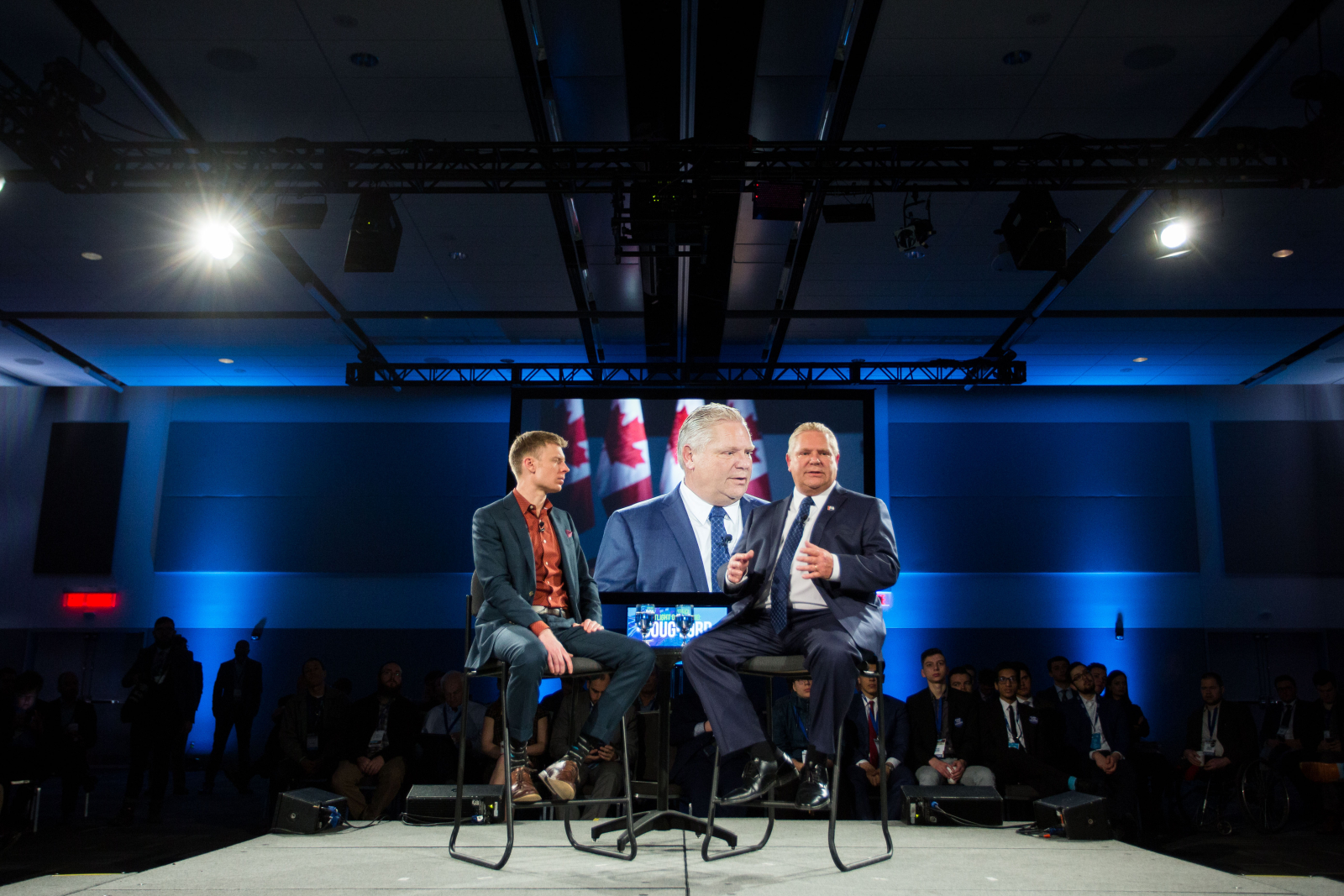 Progressive Conservative Party of Ontario leadership hopeful Doug Ford sits on stage with reporter Anthony Furey for an interview on Day Three of the Manning Networking Conference in Ottawa on February 10, 2018. Photo by Alex Tétreault
Previous story
Next story

Immediately after Doug Ford was announced the new leader of Ontario's Progressive Conservative party, he faced two questions from media gathered late on a Saturday night in Markham: Why did it take so long for the results to be released? And, did his main opponent Christine Elliott concede the race?

In the days following, many journalists in Toronto and elsewhere in Ontario followed up with similar, often gentle questions:

What happened? Was even he surprised?

What did he say to Christine Elliott? What steps would he take to heal a divided party?

What did he say to Ontario Premier Kathleen Wynne when she called to congratulate him?

Is he now in campaign mode? And had he talked about what that would mean with his family?

Is there a softer side to Doug Ford?

National Observer watched, listened and transcribed parts of seven one-on-one broadcast interviews Ford has given since becoming Tory leader. While it would not be fair to say that media members only lobbed softball questions at the public figure — with questions about whether he is similar to U.S. President Donald Trump or what his deceased brother former Toronto mayor Rob Ford would think of his new job — many nonetheless gave him a great deal of space to touch broadly on his winning platform without pinning him down on what he would actually do if elected.

(One glaring exception to this rule is a morning radio interview conducted by CBC Ottawa's Robyn Bresnahan, during which, Huffington Post's Emma Prestwich observed, Ford appeared to get "quite flustered.")

If Ford — and Ford Nation — were unknown, some open-ended questions from journalists might make sense as a way of introducing audiences to a new face in the upcoming provincial election.

What made some of these interviews baffling, however, is that Doug Ford is not at all an unknown entity. He is Doug Ford, Jr., the son of Doug Ford, Sr., a Progressive Conservative MPP who sat in Mike Harris's Ontario government. In Toronto's City Hall, he stood beside — and stood up for — his younger brother Rob. In 2014, he took over Rob Ford's mayoral campaign, and until January he was expected to run against Toronto Mayor John Tory again this year.

Immediately after he was announced leader, Forum Research released the results of a telephone poll of 923 Ontarians showing that 48 per cent disapproved of Ford as leader of the Progressive Conservatives and 36 per cent approved. Only 16 per cent said they didn't know. The same poll found Progressive Conservatives are poised to take 44 per cent of the popular vote, and a majority of seats, beating Wynne’s Liberals (23 per cent) and Andrea Horwath’s NDP (27 per cent). The Ontario Greens, led by Mike Schreiner, were barely on the map (five per cent).

All this is to say that people watching or listening to the news in Toronto, Ontario and Canada know Ford. And his anchoring policy positions are equally well known, even as they demand further details: he plans to get rid of penalties on carbon emissions, find "efficiencies" in the public service, repeal and revise Ontario's sex education curriculum, and cut hydro rates and hospital wait times. As a fan of minimizing government intervention, he also said this week that he is interested in seeing marijuana sold privately when it becomes legal later this year.

Throughout the Ontario Progressive Conservative party's short leadership campaign, Ford and his rivals — Elliott, Caroline Mulroney and Tanya Granic Allen — vociferously opposed a tax on carbon. Ford's predecessor, Patrick Brown, had planned to scrap Premier Kathleen Wynne's cap and trade system and bring in a straight carbon tax that would fund much of his platform.

Where Ford was pressed for details, reporters asked him to explain how he will handle environmental issues in lieu of a penalty on carbon emissions. Ford often told interviewers it was an issue most people didn't care about.

For example, on Breakfast Television in Toronto, when Kevin Frankish described the environment as a No. 1 issue, Ford interrupted to say, "Well, it's not No. 1."

"Let’s disagree on that fully, because I’ve talked to thousands and thousands of people across this province (and) guess what, Kevin? Not once, not once has anyone ever come up and said, 'My No. 1 concern is environment. To the contrary, (peoples') No. 1 issue is the high Hydro rates," Ford said. "Another (No. 1) one issue is jobs, they want good paying jobs. They’re tired of the government taxing them to death. Those are the three top issues, I can assure you, and anything else falls under that, because if you don’t take care of your finances you aren’t going to take care of any of the social issues."

(Governments and scientists from around the world have reached a consensus that climate change is a serious problem that could cause irreversible damage to the planet's economy and ecosystems if it is not addressed.)

A different Forum poll, conducted at the end of February, showed that nearly half of Ontarians (46 per cent) do want a price on carbon emissions. Half (51 per cent) also said they wanted to see the province do more to curb climate change.

To a further question about what he would do on the environment, Ford referred to his labeling and packaging company, saying, “I can tell you, you start working with companies, you do what we did with our company, you invest in technology that’s environmentally friendly. I visit more companies than I can shake a stick at, here and south of the border, the vast majority of the companies, 99 per cent of companies focus on the environment just like we did at Deco and we continue to do it.”

On Tuesday morning, Ford was asked by David Common on CBC Radio in Toronto whether he believes "human activity" causes climate change.

Asked to expand on what the "certain degree" would mean, Ford discussed the environmental efforts made by his company, Deco Labels. “I’m not a denier, that’s what I’m saying. Our company focuses on making sure we’re environmentally friendly. Every company I deal with for the most part that I see, is environmentally friendly, they focus on it no matter if it’s their packaging or whatever they might have. But I’m not about to give $469 million to California in this cap and trade situation. We aren’t going to do it, we aren’t giving money to California and Quebec, $469 million, it’s ridiculous. The wind turbines, we’re subsidizing wind turbines.”

Ford raised the spectre of a $469 million price tag in several interviews, including on CTV's 6 o'clock news in Toronto, CBC Radio in Ottawa, and Newstalk 1010's The Ryan Doyle Show, with no follow-up.

But the source of Ford's figure proves difficult to find, particularly after Ontario Environment Minister Chris Ballard announced last week that the province had most recently raised $471-million in a carbon allowance auction and, to date, has made $2.3 billion from its cap and trade system. This system sets a limit on pollution, allowing companies to buy permits to pollute from the ones that exceed their targets and reduce emissions.

In short, cap and trade allows the power of a free market to reward innovators that can create jobs and growth, while punishing the laggards that generate too much pollution.

Ford didn't provide any detailed examples about what his company did to reduce pollution. However, he did react with some annoyance when Bresnahan asked him on the CBC Ottawa morning show about a Globe and Mail report that alleged he sold hashish for several years in the 1980s.

He has denied doing any such thing.

Doug Ford is too close to Donald Trump for comfort

What worries me is that many

What worries me is that many Ontarians may well buy into Ford's goals without any idea of whether there is any chance that he can deliver them. Without a costed platform this is just pie in the sky.
How many times have I heard about cutting waste in government when that is just rhetoric for cutting programs.
As for the carbon tax - I assume Ford supports property taxes supporting garbage collection - but how different is this from a carbon tax which supports the reduction of dangerous gas emissions? By his way of thinking, maybe garbage collection should be cut to leave more money in taxpayers pockets while garbage piles up outside every house - after all living in a cesspit seems to be OK with him. The home owner could then pay a company to do the collection and let the market set the price. Yeah - right.

I do hope that the hate for Wynne does not mean that voters will jump from the pan into the fire.

Doug Ford does what all

Doug Ford does what all populists do - encourages people who don't want to think for themselves and be responsible to hand all this to him (maybe bar the thinking; that gets left behind) and he'll look after them.

It amazes me that what never seems to be understood is relinquishment of responsibility equals relinquishment of personal power. Why would those who consider themselves powerless already do this? We see people voting against their own best interests all the time. My best guess is it has something to do with feeling one is on a winning team - a kind of reflected `glory' - maybe.

(And I wish someone would take the time to analyse Ontario's position and link up today's issues with the continuing fallout of the Harris Common Sense Revolution that annihilated this province's economy.)

May I advise readers to view

May I advise readers to view Steve Paikin's interview with Doug Ford following his win (TVO - The Agenda, March 20). They'll see a calm and quite authentic-sounding Ford. None of the taunts will work. Like Trump, his weaknesses are his strength. If he stays out of trouble, his victory on June 7 is guaranteed.