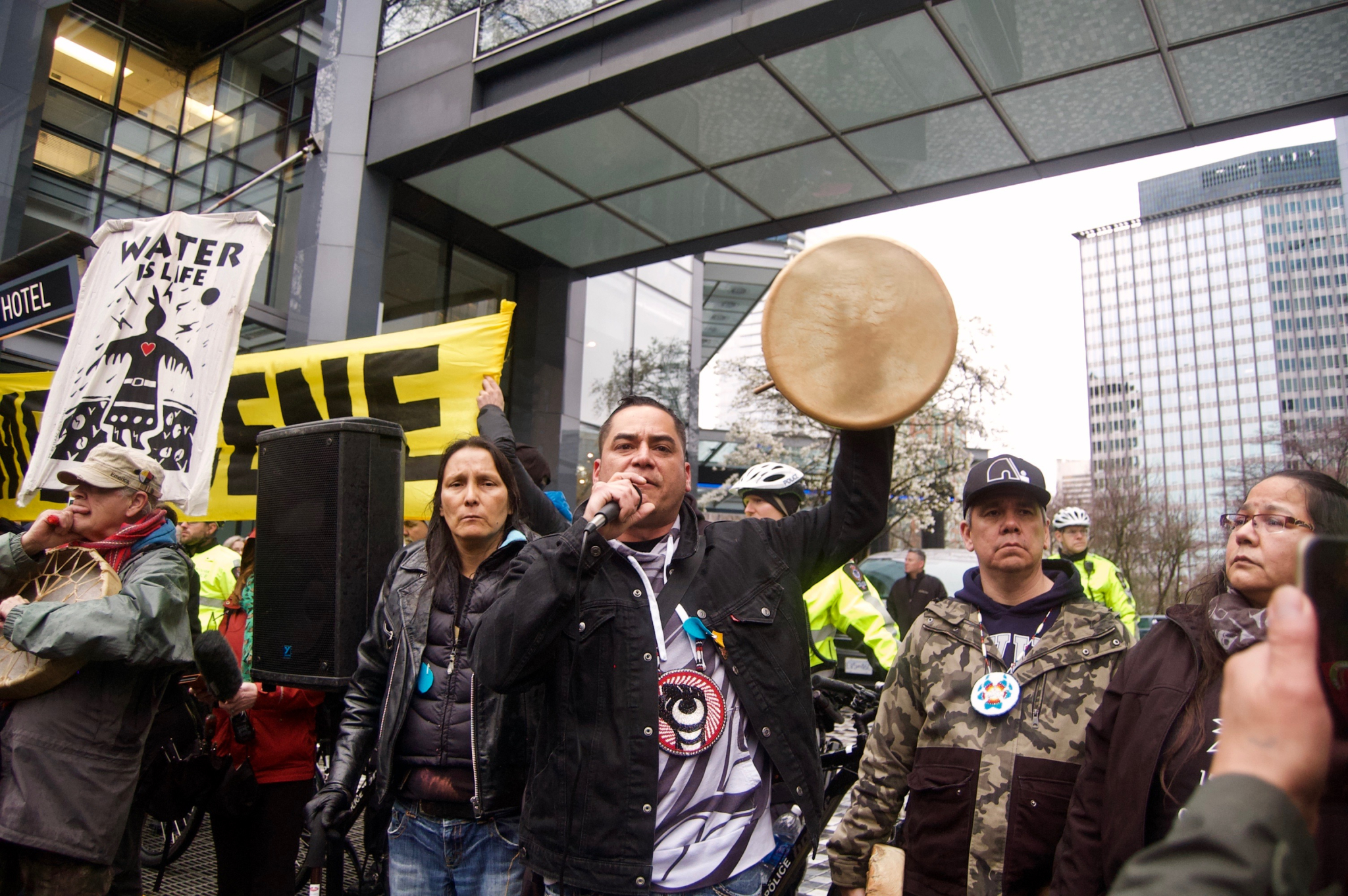 Hundreds of people marched from the Vancouver Art Gallery to the Sheraton Wall Centre, an upscale hotel where Prime Minister Justin Trudeau attended a $1,000-a-plate Liberal fundraiser on Thursday. They came with metal pots, pans, and wooden spoons with the intent to make their opposition against the proposed Kinder Morgan pipeline expansion heard by guests attending the event.

The Trans Mountain pipeline expansion proposes to twin an existing pipeline from Alberta to the coast of British Columbia, tripling its capacity to carry up to 890,000 barrels of petroleum products, including diluted bitumen.

The project has been approved at the federal level, but is currently under judicial review by the Federal Court of Appeal. Six First Nations, as well as the cities of Vancouver and Burnaby have challenged the project in court. The current B.C. government opposes the pipeline project, putting it at odds with Alberta and Ottawa. Proponents of the project say it will create jobs and millions of dollars in tax revenue, while opponents argue it will increase the risk of oil spills along the B.C. coast and make it impossible for Canada to meet its climate goals.

Since November 2017, protesters have been blockading the Burnaby Mountain Kinder Morgan terminal construction site. This resulted in a court injunction being passed by B.C.'s Supreme Court upon Kinder Morgan's request, whereby protesters are no longer legally allowed to be within five meters of the construction sites. Since this judgment was passed on March 15, people opposed to the project have crossed the injunction line, resulting in over 170 arrests. Notably, parliamentarians Elizabeth May, and Kennedy Stewart were arrested, as well as Green Peace co-founder Rex Weyler, and a former Kinder Morgan engineer.

Will George, a member of the Tsleil-Waututh Nation, said he was not protesting the pipeline expansion just for his family, but for the children of Prime Minister Trudeau and others who will depend on clean drinking water and air in the future. Chief Bob Chamberlain of the Kwikwasut'inuxw Haxwa'mis First Nation told the crowd that environmental degradation was an issue that nobody could afford to ignore today.

Watch National Observer's live feed of the march, and speeches outside the Wall Centre.

People protest outside a fundraiser hosted by Prime Minister Justin Trudeau in Vancouver on Apri 6, 2018. Video by Dylan Sunshine Waisman

Trudeau is on standby for

Trudeau is on standby for eviction: https://canadianviews-ymo.ca/mr-trudeau-king-of-pedantry/