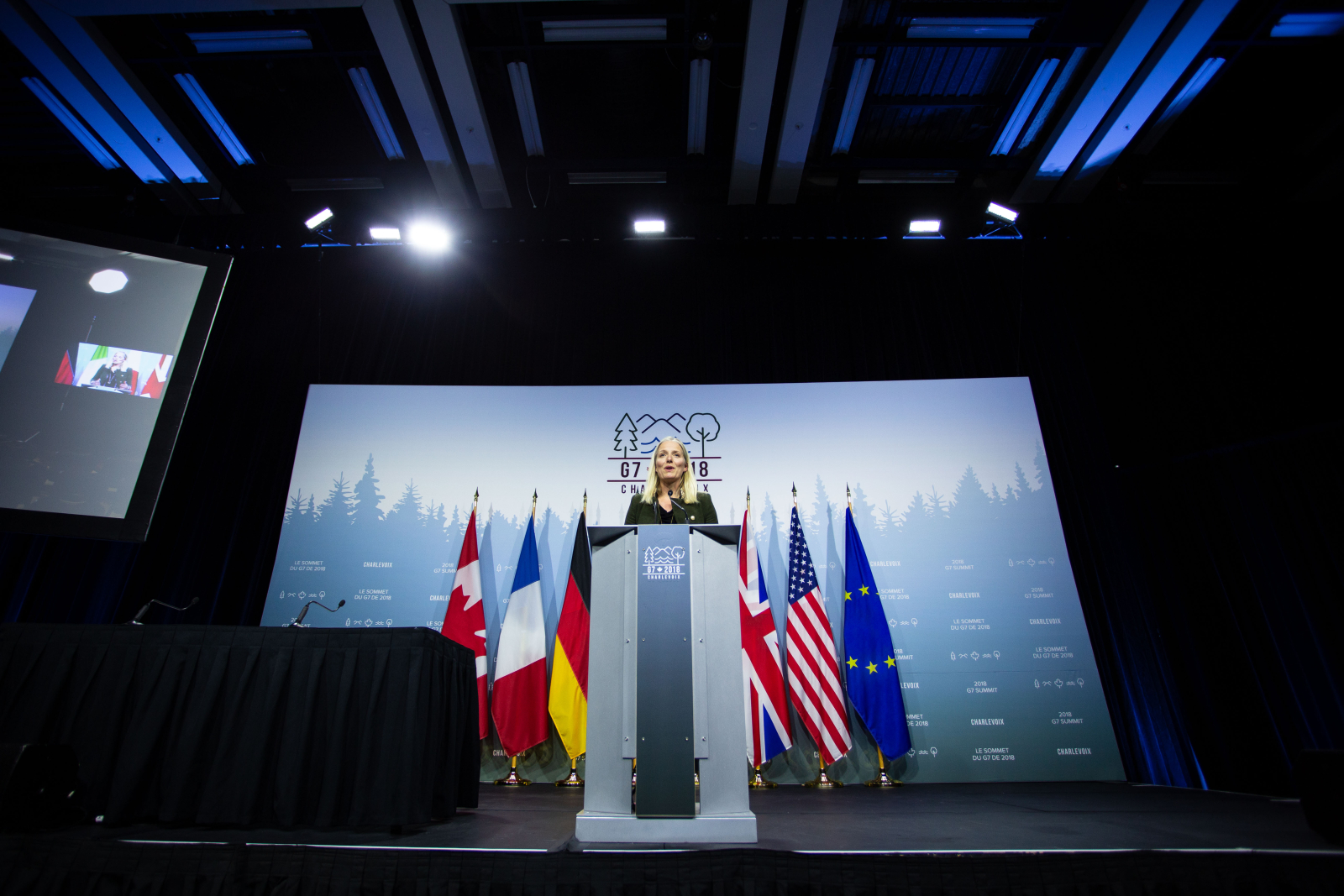 Environment Minister Catherine McKenna speaks to media at the G7 summit in Quebec on June 8, 2018. Photo by Alex Tétreault
Previous story
Next story

“No,” came the blunt response from McKenna, when asked to comment on whether she agreed with remarks made earlier by ecstatic federal Conservatives who were celebrating the results of the June 7 Ontario election as a rebuke of Prime Minister Justin Trudeau's climate change policies.

“We’ve been clear to Canadians, and the world has been clear, that we need to take serious action to tackle climate change."

McKenna made the comments while speaking to reporters in Quebec City, gathered for the first day of the two-day G7 summit of advanced industrialized nations, hosted by Trudeau in La Malbaie, northeast of the Quebec capital.

"It is one of the greatest challenges we face," McKenna said about climate change. "At the same time, we need to grow our economy and create good jobs, and that is exactly what we’ve been doing.”

Ford, leader of the Progressive Conservative party, campaigned hard against what he called a “carbon tax,” which doesn’t exist in Ontario. The province has a cap and trade system of carbon pricing set up by the outgoing Liberal government of Premier Kathleen Wynne, who also linked its carbon market to Quebec and California.

But the premier-designate consistently lumped in Ontario’s system on the campaign trail with a proposed federal system for minimum federal carbon pricing standards — one that federal officials had said would only apply in cases where provincial systems are below the standard set by the Canadian government.

Federal Conservative Party finance critic Pierre Poilievre wasted no time during the daily question period in the House of Commons on Friday to pick up on Ford’s win as a signal of support for his party’s own federal war of words against the Liberal plan to price carbon nationwide.

“The people have voted against the prime minister's carbon tax,” said Poilievre. He then asked Prime Minister Justin Trudeau — who is in Quebec for the summit — if he would “accept the verdict of the people and cancel his carbon tax plan to raise the price of everything.”

“You’ve already had resistance from provinces like Saskatchewan. If (United Conservative Party Leader) Jason Kenney wins in Alberta, forget about carbon pricing in Alberta,” he said. “There might even have to be some litigation about this, but the fact of the matter is this is not a popular thing.”

McKenna reiterated that 80 per cent of Canadians already live in a jurisdiction where carbon pricing is in place. British Columbia and Alberta have carbon taxes, while Ontario and Quebec have cap and trade.

The minister added she was committed to working with “all the provinces and territories,” as well as businesses, on getting a federal price on pollution in place.

‘Lack of concrete detail’ so far on plastics charter

Trudeau has been pushing for a charter at the G7 to reduce plastic waste pollution in the world's oceans.

But if a plastics charter with the G7 emerges at the summit, the highest-level discussions won't include the Americans, because U.S. President Donald Trump has decided to flee the summit early, skipping out on a "working session" on oceans with other nations invited to the summit.

At her press conference, McKenna said plastics pollution in the oceans is a “top priority” at the summit. But she could not say yet whether the Americans would be on board with a plastics charter.

“We’re certainly working hard to get G7 leadership on board,” said McKenna. “We think it’s really important that the world comes together...only by working together can we tackle this.”

Ashley Wallis, program manager for water and plastics at Environmental Defence, said she was still hoping Canada would make an announcement on the second day of the summit with more detail.

“I think that at this point, all that the minister has really said is that this is an issue — which we knew,” she said, “and that Canada is focused on it and is planning to do something, but there’s still a lack of concrete detail.”

Wallis said she will be looking for a charter that provides a time-constrained target, of which all the G7 nations agreed, as well as a commitment to working with industry to create more recyclable or biodegradable products, and investments in developing countries.

Ms. McKenna lives in her own

Ms. McKenna lives in her own special world....one where on the one hand she must penalize everyone for their carbon footprint and on the other her government is now increasing Canada's carbon footprint on a massive scale. She's in the dirty oil business now.

But also deeply informative. Because truth is, we are all in the dirty oil business in Canada, and its past time we owned up to it. Trying to shift our focus, just a little, and make promises to the world's oceans isn't half enough.

That said, its disgusting that politicians like Poilievre can still feel safe opening their mouths and blaming the carbon tax for all our woes. Climate change is more than real..its here and doing damage as I write. Plastics are one more noxious invention of the fossil fuel industries, and if we follow the lead of blowhards like Trump....and vote one more time for lower taxes and cheap beer.........

We have no business calling out the politicians trying to get us used to levies that are still far too low to do the job.

But also deeply informative. Because truth is, we are all in the dirty oil business in Canada, and its past time we owned up to it. Trying to shift our focus, just a little, and make promises to the world's oceans isn't half enough.

That said, its disgusting that politicians like Poilievre can still feel safe opening their mouths and blaming the carbon tax for all our woes. Climate change is more than real..its here and doing damage as I write. Plastics are one more noxious invention of the fossil fuel industries, and if we follow the lead of blowhards like Trump....and vote one more time for lower taxes and cheap beer.........

We have no business calling out the politicians trying to get us used to levies that are still far too low to do the job.

The federal conservatives must remember (as Mr. Ford also has to do) that 60% of people who voted in Ontario did not vote for Doug ford. NDP and liberals voters agree with a price on carbon and they are the majority.
Ontario's carbon market is linked with California an Québec as a member of the Western Climate Initiative (WCI). In these three jurisdictions, GHG emissions have dropped faster than expected. Since 2000, Canada's GHG emissions have declined by just 1.5%, despite Ontario's emissions dropping by more than 20%, and compared to an average decrease of 4.7% across the OECD area. In Ontario, around 82% of emissions are covered by the cap and trade system.
Québec has thrived since it began cap and trade in January 2013. Gross domestic product grew by 4.2% from 2013 to 2016 while Québec allowances auctions raised over $1.94 billion for the province's Green Fund. Ontario began its first compliance period in its cap and trade system on January 1, 2017 and it's a big success.
The Environmental Commissioner of Ontario on the Ontario cap and trade system: "The first year's four auctions were rousing successes, selling out almost all current year vintages and most of the future year vintages, largely at prices above the legal minimum floor price. In total, the auctions raised more than $1.9 billion for the Greenhouse Gas Reduction Account (GGRA), without causing undue hardships among fossil fuel consumers... The cap and trade system is starting to motivate change, offsetting some of the hundreds of millions of dollars of provincial subsidies for fossil fuels."
Most jurisdictions have chosen cap and trade instead of a carbon tax, although both options can work. Cap and trade can be hard for many people to trust because it is hard to understand. But research from Harvard and elsewhere shows that cap and trade can reduce emissions more reliably and at less cost than a carbon tax.
(source: Environmental Commissioner of Ontario, January 2018: "Ontario's Climate Act From Plan to Progress Report 2017")
Why Doug Ford would get rid of a system that woks in reducing emissions and providing the province with money that he will desperately need to fulfill all the promises that he laid out during the provincial election? It doesn't make any sense. Well, a lot of what is saying doesn't make any sense either.

When you are leading the

When you are leading the nostalgia bus, promising return to some mythical past where climate change wasn't real, taxes were low and wages high, beer affordable, and men still wearing the pants.........it's not about making sense.

It's about offering confused and sometimes overworked desperate people a solution simple enough for them to understand. After 40 years of trickle down globalism, its hard to tell the folks waiting in dry dock for the wealth creators to raise all the little boats..........that its going to get far worse, if we don't get off the rip and ship wagon.

The working poor never saw any benefits of globalism. It's beyond belief that now they are going to be taxed for emissions no one can see. Doug is working that seam of desperation and hope....and let's face it.