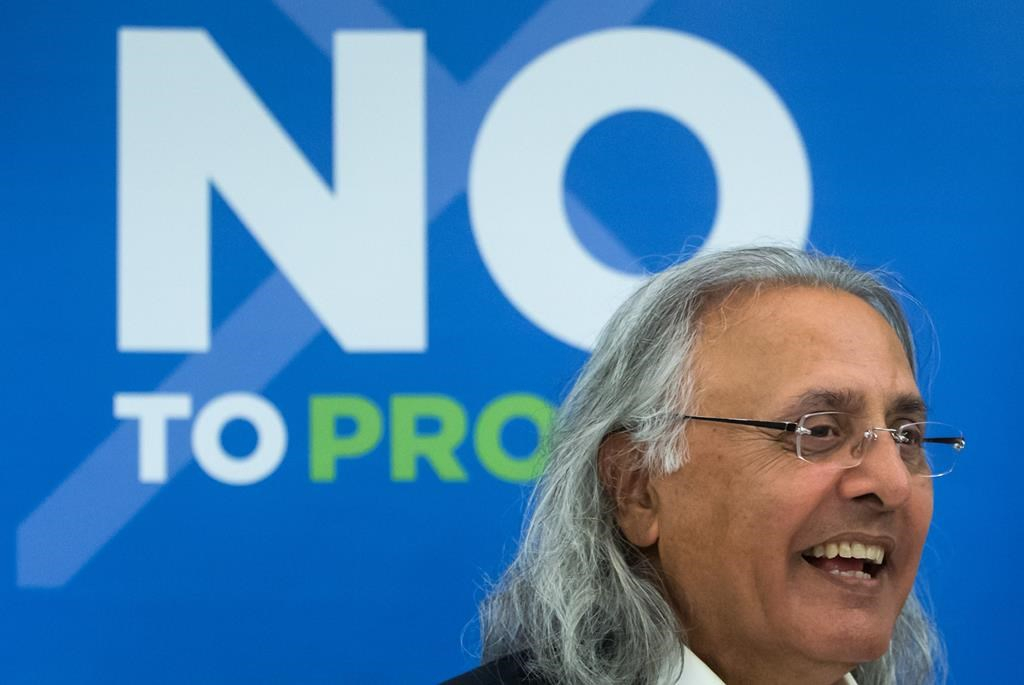 Former British Columbia premier Ujjal Dosanjh is urging voters to say No to a referendum on proportional representation because he believes it would usher in extremist parties like those in some European countries, but others say that's a scare tactic used to oversimplify a complex issue.

Dosanjh said Germany, the Netherlands and Hungary require very low percentages of people to vote in candidates with racist views, and that has changed those political landscapes in a negative way.

The former New Democratic Party premier told a news conference Thursday that the party he once led is proposing a complicated proportional representation system requiring only a five per cent threshold to guard against extremist parties in the legislature.

Proportional representation is a system in which the number of seats held by a party largely matches the percentage of votes its candidates receive versus the first-past-the-post model in which a candidate with the most votes in a district wins and then represents the riding.

Premier John Horgan has said the agreement with the Green party allowing the New Democrats to form government last year is an example of electoral reform, in that proportional representation would allow parties to form coalitions to work together on various issues.

However, Dosanjh said the current first-past-the-post model has proven to be simple and stable and that a mail-in ballot this fall asking voters who agree to proportional representation and then rank three system models would be confusing and unfair.

"The B.C. government proposal does not provide voters with any geographic riding, boundaries or any details on how the three different proportional representation systems would work in B.C.," he said. "And two of those systems do not exist anywhere else in the world."

The ballot would require a 50-per-cent-plus-one margin of support in a province where two other attempts to change to proportional representation, in 2005 and 2009, have failed. Other provinces, including Prince Edward Island and Ontario, have also tried unsuccessfully to switch from the first-past-the-post system.

Jonathan Rose, an associate professor in the department of political science at Queens University, said mechanisms other than the voting threshold could be incorporated into a proportional representation system to prevent extremist candidates from gaining power.

"There are scare tactics that are used, like Mr. Dosanjh's argument, that people are not naturally averse and they say 'better the devil you know than the devil you don't,' " he said. "There's lots of misinformation. It is also one to sway people, by saying Germany has extreme parties, therefore we'll have extreme parties. It's just wrong."

Maxwell Cameron, a political science professor at the University of British Columbia, said most established, high-income democracies around the world use some form of proportional representation.

Populist resurgence in parts of Europe is independent of electoral systems and has more to do with multiple cultural factors compared with Canada, where diversity is prized as part of the most successful multicultural country in the world, he said.

"I think we can learn from the way in which stable social democratic systems in Europe work, that far from being a threat of creating right-wing extremism, I actually think having proportional representation could help us to avoid some of that extremist politics. Look at the United States: first-past-the-post has hardly helped them to avoid Donald Trump."

The B.C. government is providing $500,000 to the official Yes and No sides in the leadup to the referendum, but has yet to establish rules on getting public funding before the July 1 launch of the campaigns.

"There's not a lot of good information on the table so right away the arguments out of the gate tend to be these kinds of highly charged claims about different electoral systems that don't always have a solid basis in evidence."

Attorney General David Eby has said that if voters decide to adopt a proportional representation system, a second referendum would be held after two general elections, giving voters a chance to return to the first-past-the-post system.

Americans warming up to dictators