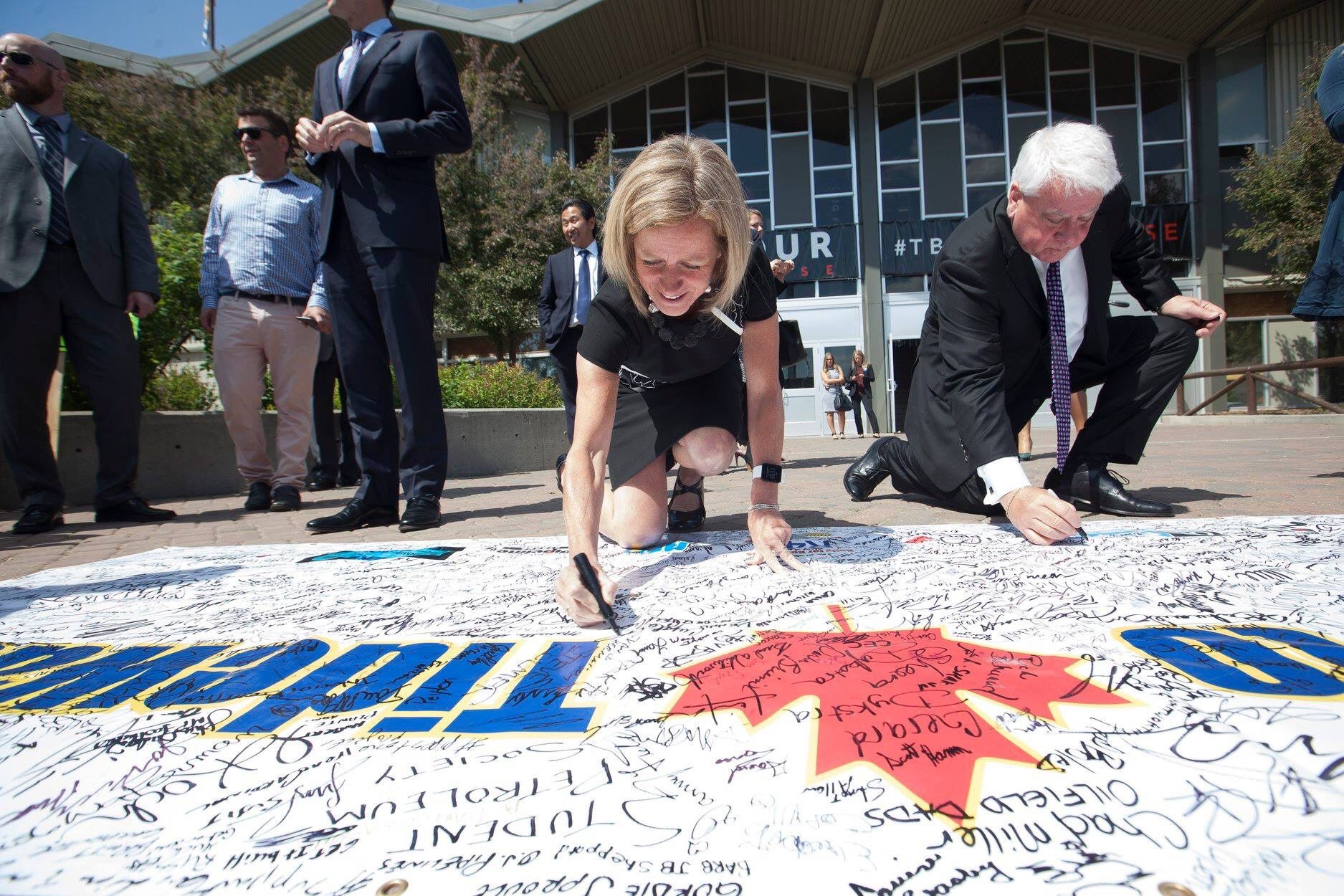 Alberta Premier Rachel Notley and Kinder Morgan Canada president Ian Anderson sign a message of support for pipeline expansion at an event in Calgary on May 30, 2018. Twitter photo posted by Rachel Notley
Previous story
Next story

Five oilpatch executives from Kinder Morgan would be able to cash out more than 300,000 shares — worth millions of dollars — if shareholders of the Texas multinational energy company vote to approve a multibillion dollar sale of assets to the Canadian government, the U.S. Securities and Exchange Commission has been told.

The executives are entitled to these stock options based on their existing employee plans with Kinder Morgan and would be allowed to cash out the assets early because they are all leaving the parent company to join a subsidiary that is being purchased by the government.

The early settling of their stock options won't be the only benefit that executives are getting out of the deal. Three of the top executives at Kinder Morgan Canada, Ian Anderson, David Safari and Scott Stoness, will also be entitled to a combined $3.9 million in bonuses if they remain in their jobs for the next two years.

Kinder Morgan submitted the new document in advance of an Aug. 30 vote by its shareholders in Calgary about whether to accept the transaction.

Prime Minister Justin Trudeau’s government announced on May 29 that it was purchasing the assets, including an existing west coast oil pipeline for $4.5 billion, so that it can proceed with construction of the Trans Mountain oil pipeline and tanker expansion project.

The document says the five executives — Anderson, Safari, Stoness, Hugh Harden, and Norm Rinne — will all remain with the company and assets that are being sold to the government. This means that taxpayers will soon be responsible for their pay, including performance bonuses.

Trudeau has said the project is critical to Canada’s economy, supporting jobs as well as national efforts to address climate change. The new details released by the company show how the oilpatch executives would personally benefit from the transaction.

The Trans Mountain expansion project is expected to create thousands of jobs during construction and help stir growth in Canada's oilsands region once it is up and running since it will give them expanded access to new markets on the Pacific coast.

Opponents have said that the oil pipeline project violates the rights of First Nations and is too risky since it could lead to spills and push Canada's climate change goals out of reach.

Shareholders are expected to endorse the deal during a special meeting to be held in Calgary on Aug. 30, 2018. It would allow Kinder Morgan to recover all of the money it has spent on the project, more than $1 billion so far, and turn a profit.

Justin Trudeau has said the project is critical to Canada’s economy, supporting jobs as well as national efforts to address climate change. The new details show how some Kinder Morgan executives would personally benefit from the transaction. #cdnpoli

It then turns responsibility for completing the expansion, now estimated to cost up to $9.3 billion, over to taxpayers.

A spokesman for Finance Minister Bill Morneau, who negotiated the deal, declined to comment on the apparent benefits for executives, referring the questions to Kinder Morgan.

“Kinder Morgan still owns the project and we are not involved in the compensation of any Kinder Morgan employees,” said spokesman Pierre-Oliver Herbert.

It was not immediately clear what Herbert meant when he said that the government wasn’t involved in compensation of Kinder Morgan employees since the proxy document said that the retention of key employees was among the issues negotiated before the government agreed on its offer to purchase the company’s assets.

The company has previously defended bonuses offered to its executives, explaining that they were reviewed and approved by its board of directors and were consistent with industry practice for a project and transaction of its size.

In total, the five executives have 326,611 in restricted shares of the main Canadian subsidiary of Kinder Morgan that trades on the Toronto Stock Exchange. Anderson has the most of these with 93,809.

In addition to their restricted voting shares, four of these executives, including Anderson, also have a combined total of 32,712 shares of what the company calls “phantom units” of the parent Kinder Morgan company, which trades on the New York Stock Exchange.

Stock options for Kinder Morgan executives worth more than $6 million

The executives also have protection that allows them to be granted additional shares if the value of their restricted units drop, according to the proxy document. Such a change may occur since the Canadian company would have fewer assets after the sale is complete.

For Anderson, chief executive officer of Kinder Morgan Canada, this could mean he would get about $2 million in shares before he moves over to his new federal government job. He is also entitled to a $1.5 million bonus on top of his existing salary if he keeps his job over the next two years.

David Safari, vice-president of the Trans Mountain expansion project, is also being offered a $1.5 million bonus if he stays until 2020, while Scott Stoness, Kinder Morgan Canada vice-president of regulatory and finance, would earn a $876,000 bonus if he remains in his job until July 2020.

National Observer previously reported on June 1 that Kinder Morgan's board of directors had offered Anderson and Safari their retention bonuses as part of the Trans Mountain sale agreement with the federal government. The bonuses for Stoness were not publicly reported at that time.

Accountability and transparency are 'lacking'

Kai Li, a finance professor from the University of British Columbia’s Sauder School of Business, said that the stock options would be normal performance incentives offered by the company and would have been set up long before the federal government stepped in to purchase the pipeline.

She also said it was typical for companies to have incentives to retain top talent to ensure a smooth transition, but she said that doesn’t mean they should all be awarded big lump sums of money merely to stick around.

Since the federal government is becoming the owner, she said that there should be more transparency and accountability measures in place that set benchmarks and milestones.

“You need to link it to the performance, the progress of the project, otherwise the money is too easy to be made, especially if this is taxpayers' money,” she said in an interview. “So accountability and transparency are very important. That is lacking.”

Mike De Souza is National Observer's managing editor and lead investigative reporter. Follow his work – use the promo code MIKE today and save 20% on your annual subscription.

Ottawa's death wish. If they

Ottawa's death wish. If they get away with this bulls--t there is no hope for the country... https://canadianviews-ymo.ca/david-orchard-on-nafta-and-the-kinder-morga...

The greatest threat to Canada

The greatest threat to Canada’s national interest is the Conservative Party of Canada. Follow the logic trail along this story, and you’ll end up understanding why the Trudeau government is conducting this dismantling the way they are.

The most effective way to ensure a second term for Notley’s NDP in AB, and for Trudeau’s Liberal Party in Ottawa, is for both entities to fight like hell to get this pipeline built. Experts point to market forces making it’s actual construction unlikely.

The construction of the pipeline, if it ever does happen, is by far a lesser evil than a return to the dark days of a Harper style Conservative Party majority government. Justin’s betrayed promise of election reform makes that a very real threat, and one need only look at that dangerous dufus Doug Ford’s actions in Ontario to see what would happen if JT and RN didn’t play this the way they are.

Ask me...this is money well spent, because it buys them time, and time is what we need for events to play out. Remember, until the oil
flows through a pipe there is no threat to our beautiful land, waterways and coastal environment. In the mean time we are all doing the best we can to ensure that it never does.

The greatest threat to Canada’s national interest is the Conservative Party of Canada, and our own ignorance of the importance of our actions in making sure that party of dark agents never rises again.

Love that reasoning. Sincerely hope you are right about the outcome of this b.s.

P.M. Trudeau's political "money in the bank" regarding re-election is the NDP's Sikh leader and the certainty that the NDP will get very few, if any, seats in Quebec.

Given the FPTP system, the minority (let's hope) of Quebeckers who want to preserve their white Franco roots will vote either Liberal or Conservative. What are the odds of this latter, given that the rest of Quebeckers won't see much to like in Anglo Howdy Doody Sheer, meaning the Con's will be lucky to get a seat or two.

This is all very non-PC and cynical, but unless this configuration changes, it's also unbeatable.

I would someone to do some

I would someone to do some digging about the gas that is going from BC to Alberta to run the oilpatch. I would like the actual facts on the health of the people who live near the gas extraction and see what is really happening in northern BC. The people are scared because they won't have jobs but at the expense of their health. They don't say anything until they either dying or retiring.

JUST ANOTHER SCREW UP FOR