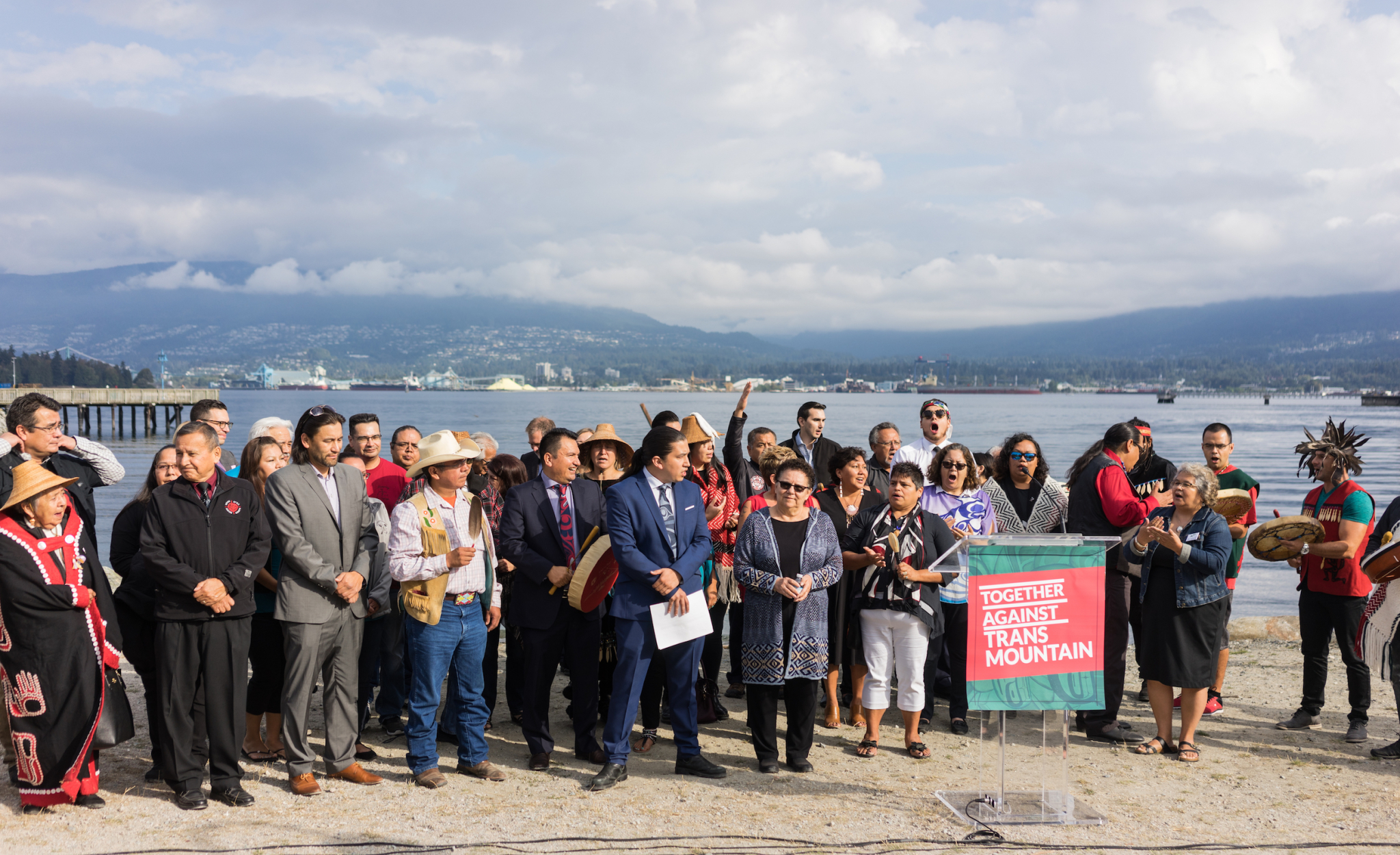 First Nations chiefs, community members, lawyers and other stakeholders celebrate in Vancouver after the Federal Court of Appeal quashed the government's approval of the Trans Mountain expansion project on Aug. 30, 2018. File photo by Michael Ruffolo
Previous story
Next story

Facing a tight deadline handed down by the federal government, Canada's National Energy Board is giving members of the public and other affected stakeholders less than a week to register to participate in a new review of the controversial Trans Mountain pipeline expansion project.

The federal regulator confirmed this news on Wednesday as it announced it was formally restarting public hearings in response to instructions delivered last week by Prime Minister Justin Trudeau's cabinet. The NEB has asked members of the public to comment on the new scope of their review as well as the hearing process, and apply to participate by Oct. 3, 2018 — a deadline that the chief of one affected First Nation described as "ludicrous."

Natural Resources Minister Amarjeet Sohi explained the instructions that cabinet gave to the regulator during a news conference last week in Halifax. He said the government wanted the Calgary-based regulator to reconsider its recommendations, specifically in response to a Federal Court of Appeal decision that found it had made a "critical" mistake in its original review of the west coast pipeline. If built, the Trans Mountain project would expand an existing system, tripling the amount of bitumen and other petroleum products from Alberta to a terminal in Burnaby, B.C.

This would send up to 890,000 barrels of petroleum products per day to the coast through the Burrard Inlet in metro Vancouver.

The federal and Alberta governments have said the project is in the national interest since it will allow Canadian oil producers to reach new markets and customers outside of the U.S., while generating revenues that can help Canada transition away from fossil fuels and address climate change. Opponents say the project is too risky and would actually push Canada's climate change goals out of reach.

Project construction came to a halt on Aug. 30 when the court quashed Trudeau's November 2016 approval of the pipeline expansion. The court ruled that the NEB had failed to adequately consider the impact of increased tanker traffic on the marine environment and an endangered population of southern resident killer whales. The court also found that the government had failed its constitutional duty to meaningfully consult First Nations and modify the project as needed to accommodate them.

The government has specially asked the regulator, which has powers of a federal court, to reconsider the mistake it made when it failed to include impacts of tanker traffic as part of the original review. But the leaders of two First Nations affected by the project say it already appears the government is destined to repeat the same mistakes it made the first time.

Canada's pipeline regulator is giving interested and affected participants only a week to send comments and register to participate in new public hearings for the Trans Mountain pipeline expansion project. #NEB #TransMountain #cdnpoli

Chief Judy Wilson of the Neskonlith Indian Band which asserts land title over a stretch of more than 500 kilometres of the proposed 980 kilometre pipeline said the way the NEB is moving forward gives her reason to think this process will be "just as bad" as the last.

"Oct. 3 is less than a week away. It's ludicrous, high-handed and unachievable," she told National Observer over the phone. "There has been no significant change in structure to their process. It looks to me like another ill-fated process. I don't think the NEB has really understood the issue of consent."

Chief Lee Spahan of the Coldwater Indian Band sat through the last public hearing held by the NEB. Though press releases regarding the call-out for public comments and registration were sent to band offices, Spahan heard the news about the new timeline from National Observer over the phone.

"I'm frustrated. I haven't heard from any federal representatives from Canada whatsoever," Spahan said. "We won a court case and still can't get them to the table. They're giving people less than a week to comment and register? Why would they give such a short timeline?"

One of the three NEB members who oversaw the flawed review of the pipeline, Alison Scott, will return for the second time. Lyne Mercier, who was forced to recuse herself from the doomed 2016 review of the Energy East pipeline project following a private meeting with an industry representative, will preside over the hearings, with Murray Little named as the third member of the panel.

NEB chief executive Peter Watson, who also recused himself from the Energy East review, said he had confidence the regulator would be able to get the job done properly this time.

"The NEB will carry out its reconsideration related to the Trans Mountain Expansion Project as directed by (cabinet), and in a fair, efficient, and accessible manner," Watson said in a statement. "I am confident in the NEB's ability to complete a thorough examination of the matters directed by the government within the required timeline."

Based on the instructions from Trudeau's cabinet, the NEB has until Feb. 22, 2019 to finish its review, a deadline Alberta premier Rachel Notley has promised to monitor personally. Alberta Energy Minister Marg McCuaig-Boyd also said in a speech to an oil industry crowd on Monday evening that she thought the new deadline was reasonable.

Directions on how to file comments with the board can be found in Section G of this NEB report. It also provides information on how to apply for the public hearing.

The board has proposed a process that would allow participants to file and challenge relevant evidence and submit final arguments on the project, as well as letters from the public. Those wishing to participate as an intervenor in the hearing are required to file a form that is outlined in section H of the report.

The date for the start of hearings has not yet been set.

Looks like the pipe dreamers are inviting another court appeal next year. Is this their idea of reconciliation?

Hey, fine by me. If they

Hey, fine by me. If they respond to their previous terrible process being struck down by the courts with an even worse process even more vulnerable to being struck down by the courts, then hopefully they'll be delayed twice instead of once. Keep kicking the can down the road and eventually they'll be trying to push through this pipeline except everyone's switched to electric cars and the shipping industry isn't buying high-sulfur stuff any more and so there's no market and no point in building it.

Frankly, I'm starting to think that for Kinder Morgan, actually building the pipeline was always plan B; plan A was to sucker the federal government into paying them a mint for nothing so they didn't have to go through the hassle and expense of doing anything real. This is Enron guys we're talking about, after all. If so, gotta hand it to them, they successfully ran the "big con" on Canada and took us for billions.

This appears to be Mr.

This appears to be Mr. Trudeau's way of doing business. Transparency was a promise he made. His nose is growing. He is more suited to governing under dictatorial rule.

It seems to be the trend in

It seems to be the trend in North American leadership, doesn't it?

There is a back room

There is a back room somewhere in the forgotten corridors of the West Block where senior bureaucrats and some old school Liberal party lions are crafting a work around to that annoying Constitution Justin's misguided father saddled him with. The ultimate irony of Canadian history may well turn out to be that the Constitution Pierre brought home will be irreparably damaged by his son, The Dimpled Dauphin.

Sure- let's just ram this so

Sure- let's just ram this so-called consultation through again without any intention other than starting construction as soon as possible. Seems these fools didn't learn anything from their past blunders and are right on track to repeat them.

Thanks for the heads up on

Thanks for the heads up on this ill-fated revisitation.
I was a "letter-level" commenter at the last go-around....in defence of the Salish Sea,....all due to the risk to my southern Gulf Islands property ownership through shares in a company. The court are focussed on the orcas, whereas the Salish Sea's entire marine life is at risk. How spilled dilbit behaves upon spillage has evolved but the more developed version (inadequate to use to make decisions upon) remains murky at best. We are getting another bum's rush to NEB judgement. I have not been informed that I can repeat my comment via letter. Lucky I read today's Observer.

Regarding “Mercier returns after Energy East fiasco”, Lyne Mercier chaired some or all of the the TMX detailed route hearings earlier this year. She had not vanished!